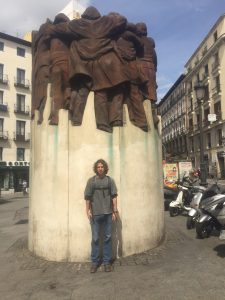 Brake in front of Monumento a Los Abagados de Atocha – a statue that honors CCOO lawyers and PCE members who were murdered during Spain’s democratic transition after the death of Franco.

My experience discovering western art in Europe has been incredible thanks to the Givens Scholarship. The scholarship gave me the power to venture and discover the many underlying purposes of art. Initially, when I earned the scholarship I planned to study how artists portrayed the Habsburg family’s extensive power in Europe. This goal led me to incredible places like Amsterdam’s Rijksmuseum and Madrid’s Prado. However, as my artistic studies continued with the Habsburg family, I started to become aware of specific underlying patterns in art that I had not seen before. I saw the many fluctuations of how artists portrayed different classes and aspects of society and how in some time periods we get very little idea of the common man’s artistic expression and view of class and society. I found this to be very fascinating and enriching for my historical outlook of art. Rather than simply admiring artists for their skill and craft I enjoyed asking, “why was this made?” and “how does this reflect society?”

The photo is of a statue that had a profound impact on me regardless of whether or not it being labeled a profound masterpiece known throughout the world. The statue honors four CCOO lawyers and PCE members who were murdered by neofascist supporters during Spain’s democratic transition after the death of Francisco Franco. I found this profound because I had an internship with the CCOO (Workers’ Commissions; Spanish: Comisiones Obreras, CCOO) and that not too long ago people were killed for their affiliation with the syndicate. It was a strange feeling. It also left me appreciating what the Givens Scholarship helped me achieve when looking at art, which was asking the question why more often and looking deeper into the reasons why art is made and how art reflects society and class relations. I would like to thank the Givens Family again for their contributions to many men at Wabash, including me.