Islamic Art and Architecture in the Spanish Context 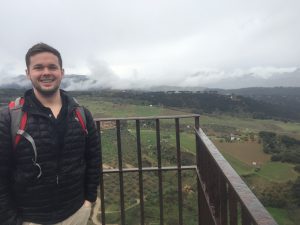 Jacob Covert on his study abroad in Spain

Art is often one of the most omnipresent constants in our lives; however, it often goes unnoticed to the unknowing or untrained eye. I can say that before this semester in Spain, I was one of the millions of people that passed art in any form without a second thought. However, there was one class that I had been encouraged to take by previous Wabash men from this program called Islamic Art and Architecture in the Spanish Context. This amazing class shows the progression of how Islam and Christianity have impacted each other to create art that has never been seen before within Andalucía. Furthermore, this class has shown the lasting impact that art can have on a community and in my case even a society.

I remember starting this class feeling overwhelmed because I was taking a class about a subject I had never studied before, in a different language, with no previous context to help. Yet, as the weeks passed by my knowledge of the basic understanding of Islamic art and architecture grew and little by little my eyes began to open to the world of art. It was truly thanks to the Givens Family that I was finally able to place all that I had learned into the proper perspective when I had the opportunity to visit the Mosque turned Cathedral of Córdoba. From the second that I entered the building, my breath was taken away, as all that I had been studying for months was realized in a single moment. When I walked in I instantly saw the thousands of arches called De entibo in Spanish due to their layered design and striped color. Moreover, as I continued to explore I could see the Islamic influence on the art and architecture. For example, there are no statues of paintings of people or faces within the old area of the mosque because the religion of Islam does not allow for these images, therefore, the exquisite artists of the past compensated for this by creating intricately designed epigraphy on the walls within the whole complex that were laced with secondary meanings, such as political agendas, Islamic verses, or poetry. Furthermore, all the epigraphy was meant to represent water, as water is an important concept within their religious art and is a representation of purity within Islam. 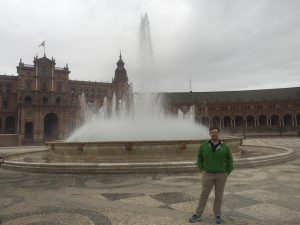 In addition to the amazingly intricate art and architecture of the religion of Islam, there were also masterpieces created by the Christians when they conquered southern Spain. An interesting contrast between the two religions was that Christian artists could create statues and paintings with real figures of people, which did not exist before in the artwork of this region. However, the most important contrast that exists between the two religions is the use of light in artwork and, more importantly, the architecture of the Cathedral. I remember that when touring the building I was astounded by how dark it was within the older Muslim portions of the structure, yet as the tour continued there was a distinct change that took place when I enter the area that was redesigned and constructed by the Christians. Within a matter of two steps I was flooded with light and brilliant pieces of artwork depicting the story of Christ. The contrast was as blatant as day is to night because the Mosque turned Cathedral of Córdoba allows for the mixture of two completely different cultures to intersect and be seen as a whole.

While I have had the opportunity to see and visit museums and masterpieces from famous artists like Van Gogh and Picasso, the reason I have focused on the Cathedral of Córdoba was because it was the creation of master artists and architects of two different cultures. The incredible designs, paintings, and architecture give a little glimpse of the two different culture’s view on how art within the Spanish context should be viewed and depicted. Yet, both the art and architecture of both the Christians and Muslims work harmoniously with each other to create the breathtaking structure that is the Cathedral of Córdoba. It was truly the generosity of the Givens Family that brought this dream to fruition during my semester in Granada, Spain and I truly would like to thank them for all that they have allowed me to do.