Eddie Pingel ’15 – Last year I was able to accompany Professor Hartnett on an immersion trip to Italy, where we visited places such as Pompeii, Herculaneum, and Rome. It was on tht trip I realized just how interested I was in being abroad. As a Classics major, the decision to return to Italy, and in particular Rome, was an obvious one. 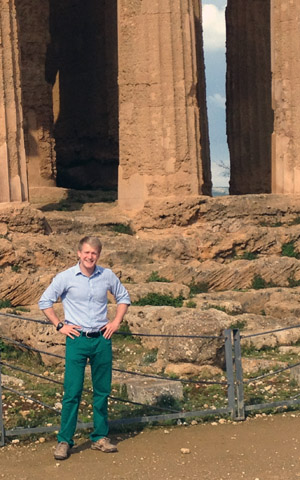 My experience here thus far has been reminiscent of my immersion trip in that I once again find myself completely captivated by this city and its unique culture. Rome is a city of levels, where one will find materials ranging from the 7th century B.C. to the Roman Republic and Empire, and from early Christian churches to the Papal palaces of the Medieval Ages. I have been fortunate to study each of these time periods. My studies have primarily focused on the Ancient Romans, and I have gone to such sites as: the tomb of Aeneas, the founder of the Roman race, the supposed Hut of Romulus, the founder of Rome itself, Pompey’s Theater, where Julius Caesar was assassinated, and the Riace Bronze Warriors, which are among most famous bronze statues in the world.

I have also been throughout the country of Italy, ranging as far north as Venice and as far south as the island of Sicily, where we spent 9 days exploring the ancient Greek theaters and temples, built over 2500 years ago and which are still intact today.

The experience has been educational in other ways as well. The cultural barriers that once were intimidating and foreign have now become familiar and even home-like. My complete lack of knowledge in the Italian language once intimated me into not interacting with the people of Rome at the beginning of the semester.  Halfway through it, this is no longer the case.

Even though I am still by no means fluent in the language, I have learned enough where I can finally exchange light conversation, particularly with the staff that works within my living unit. To conclude, this semester has been an unbelievable experience, and has enriched my learning experience not only academically but culturally as well.