Garrett Bonk ’12 – Since day one of living in Spain I’ve noticed a number of things that no text book could have ever prepare me for.  Probably the biggest noticeable difference was Spain’s various linguistic styles of speaking Spanish.  Unlike the Latin American countries that speak Spanish, letters like “c” and “z” within Spanish words are pronounced with a “th” sound more or less, making every Spaniard sound like they have a wicked lisp.  Additionally, “h” and  “j” are pronounced as if you have something caught in your throat. 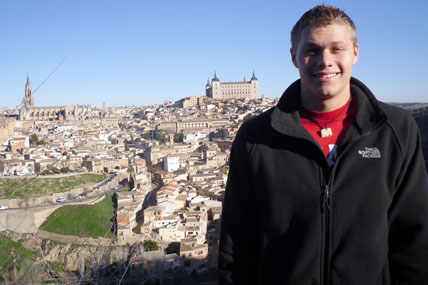 And if these pronunciation issues do not pose a challenge, it is even harder to understand Spanish when traveling to different regions.  For example, I recently visited Seville in the southern region of Spain, and found it very difficult to communicate because it is normal for the southern Spanish dialect to not pronounce the letters “r”, “d”, or “s”.

Needless to say, the language barrier has been, as mi amigo Jake Brandewie wrote earlier, an adventure.  It has been exciting to observe my growth from simply the basic knowledge of the Spanish language to a more advanced understanding of the language.  Classes at the Fundacion de Ortega y Gasset have been very rewarding in helping me become accustomed to the language and customs.  I have even struck a deal with one of the staff members to help him get physically stronger if he helps me improve my conversational Spanish.  Thanks to my experiences in Spain, my Spanish vocabulary as well as grammar has improved exponentially.  Additionally, my pronunciation has evolved to adopt many of Spain’s linguistic patterns to avoid my past mispronunciations such as confusing words like “tapas” for “topless” and “Ibiza” with “pizza”.

Still, I feel as if many a times my mind is experiencing some form of schizophrenia between thinking in English and Spanish, which has allowed me to become accustomed to blank stares or expressions of confusion.  My life motto has been “Paso a paso” (step by step) as I conquer endeavors ranging from giving presentations and writing papers in Spanish to conversing with the locals and even flirting with the Spanish chicas.

Similar to understanding the language, accustoming to the Spanish culture and traditions has been a priceless experience.  Generally, the people of Spain are easy going and friendly.  I have found it common for the locals to be very accepting of foreigners, like myself, and quick to develop relationships.  For example, I have small job in Toledo helping the children of a family in Toledo understand the English language.  After only knowing this family for a matter of a couple weeks, I have a reputation known by even their extended members of the family as “The American” and have been invited to some family functions on the weekends.

The Spanish nightlife is just as interesting as it involves botellons (public drinking parks) and dance clubs where Spaniards don’t start partying till 2 AM and usually end their night (or morning) till 6 AM.  Spain also has a variety of festivals, or at least what seems like, every month.  For example, I just got done celebrating Carnival, which is similar to a mixture of Halloween and Mardi gras.  The culture also includes great tradition like siestas (a break in the afternoon work schedule) and tapas bars (bars that offer small dishes included with the drink).

Overall, my study abroad experience has been amazing.  I can’t thank Wabash enough for allowing me to have this experience.  It truly is priceless.  Still, Spain is no Wabash, and no matter how great Spain can be, it will never overtake my loyalty and love to dear old Wabash.  I hope everyone is enjoying their spring semester, and I look forward to hearing more about Wabash’s athletic, academic, and all around success this spring.