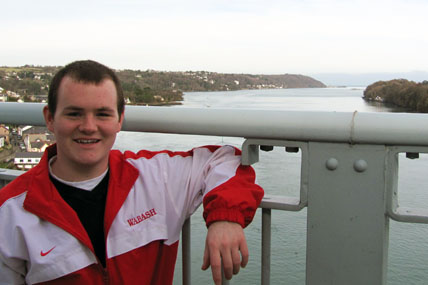 Joe on the Menai Suspension Bridge, down the straight is the Irish Sea.

– In early January I left Indianapolis on my journey to London.  I arrived in London and made my way to the Thistle City Barbican Hotel.  First I met my roommate.  He was from Dennison.  Then my orientation program with Arcadia began.  There were five students from The States, including me, that would be studying with Arcadia in Bangor, Wales.  We spent the next week touring London and learning about what was to come.  After London the five of us traveled to Chester, England where we stayed with host families and toured the small historic town.  We then spent a day touring Liverpool before making our way to Bangor, Wales.

Bangor has been great.  I am taking three film classes, two are comparable to Wabash Art credits, and the other is comparable to a theater credit.  I have joined the rowing team, the canoeing club, the mountain walking club, and the Christian’s union.  Through Arcadia I have managed to take guided trips to Scotland and York.  I will be taking another trip to Scotland soon with the Arcadia book club to have lunch with an author and visit places in the novel.

My recent trip to York was great.  I was able to stay an extra day from the Arcadia trip, which allowed me to meet-up with my Kappa Sigma brother, Donovan Bisbee.  He hosted me for the night and then took me on a tour of York, complete with a tour of the York Brewery.  It is the only brewery operating within the city walls.  I enjoy seeing other Americans on the different trips that I take, as well as at Bangor University.  For many of my fellow abroad students, this is their first time out of the U.S.  This is only my second time, and this duration is much longer than the last. 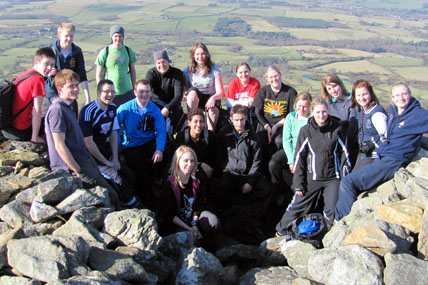 Reese, in blue sweatshirt center-left, with members of the walking club atop a bountain overlooking Bangor, Wales.

There are plenty of good Wabash men that are turned away from studying abroad every year, due to lack of funding.   I am glad to see Wabash professors offering more immersion trip classes, to help with this problem, but while this is great, it is not nearly the same.  Alumni, please continue to contribute what you can, and keep praying for more funding.  More of us deserve the wonderful opportunity that I have been given.