Pete Guiden ’12 – Feb. 19 – So…this is Africa.  Since arriving in Kenya, I think I can admit that inside I still feel a little confused.  You would think that being transplanted to a different continent, half the world away, immersed in a completely foreign culture would feel strange, different, uncomfortable. 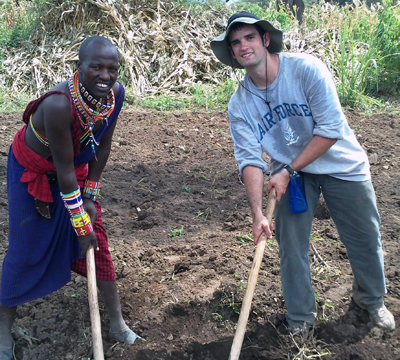 But really it doesn’t — it’s just life, the same as Crawfordsville, Indiana, in a lot of ways.  Take the kids, for example.  Anywhere you drive, they stop what they’re doing and wave at you from the side of the road, they laugh, they ask over and over and over for candy.  That’s feeling number one, and it occupies at least 90 percent of the time here.  Feeling number two, that sneaky other 10 percent is triggered in those random moments such as, waking up to the sound of monkeys climbing on your cabin roof, or the news that what you thought was thunder last night was actually an elephant trying to knock down the camp fence.  Or waking up every morning and catching the peak of Mt. Kilimanjaro – that one gets me every time.  This is Africa alright.

A couple of super-interesting experiences to note.  I’m here to study wildlife ecology and conservation intensively, so I was expecting lots of that.  No problems or disappointments there.  But what surprised me a lot in the first few weeks here was the stress put on the human involvement in the process, specifically using the revenue generated from tourism to empower the local people, who are severely impoverished — in other words, living humanely.  As part of that, the 29 students in my class were dropped off at local Maasai homesteads near the camp a few days back to spend a day with either a warrior or mama, living a day in their shoes and experiencing that culture firsthand.

My host’s name was Thomas, and I’m grateful for the little English he speaks (my Swahili is broken at best, and I know maybe two words of Maasai).  I spent most of the day helping to a prepare a tomato field for planting, or fixing the goat pen fence.  It was an amazingly humbling experience, and served as a healthy reminder to how blessed Americans truly are.

Today was focused entirely on the wildlife, as we made our third trip to Amboseli National Park (also known as heaven on earth).  Today was special though —  we worked hand in hand with the Kenyan Wildlife Service to conduct a complete count of animals in the park.  This involved leaving the road, which all tourists must stay on, to reach the largely pristine areas of Amboseli, seen by very few.  We covered a plot of about 100 square miles, and in doing so remarkably managed to only get stuck in the mud twice.  The wildlife was spectacular—topping the lists were elephants, giraffes, ostriches, and zebras (unfortunately no big carnivores).  We even got up-close and personal with some while driving out of the park, as we found the road blocked at one point by a family of elephants crossing the road.

Nine hours of standing in the Kenyan sun takes a toll on you though, so tonight’s agenda is to relax a little bit by the campfire before a full day of class tomorrow.