Michael Trevino ’12 – After a month of intensive German courses and a five-hour train ride, I have finally made it to beautiful (albeit chilly) Vienna. What can I possibly say about Vienna that has not already been said; it is a beautiful city with friendly people, a rich history, and more cafes than you can shake a stick at. But, before I can talk about that, I should backtrack a few weeks. Since my previous post, I have visited Frankfurt, Ulm, and Tübringen. 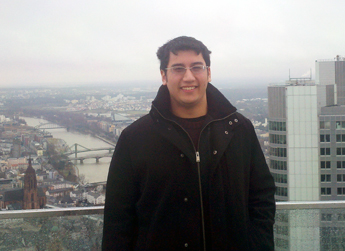 Trevino atop a viewing platform in Frankfurt, Germany

Frankfurt is one of the biggest cities in Germany and sits on the Main River. It is home to the EZB (Europäisches Zentral Bank), which is the main bank of the European Union. In addition to that however, it is also the birthplace of the famous writer and philosopher Johann Wolfgang von Goethe. Touring his rebuilt childhood home was a delight to say the least, although the attached museum was closed for renovations. Ulm on the other hand is famous for the Ulmer Münster, which the tallest church in the world. For a mere 2 Euro, you can climb the 768 steps to the top and enjoy a gorgeous view of the country side. I have to warn any future tourists though, as it is a very difficult climb up a lot of narrow stairwells. In Tübringen, I had the opportunity to enjoy a true Faschings parade. Faschings is a pre-Lenten celebration much like our Mardi Gras, but with a definite German twist. The people in the parade wear ghastly masks and colorful costumes, throw confetti onto unsuspecting viewers, grab young women from the crowd to stick into their carts, and hit tourists on the head with inflated pig bellies. It is an absolute riot to witness and unfortunately no picture will do it justice.

Even though I occasionally enjoy being a tourist, some of my favorite times have been sitting in a café with friends (Austrian or American) and having a true “Wabash” discussion. No stone is left unturned as we plough through topics ranging from world politics to the best sandwich stand in the area. At times like this I miss my Wabash brethren the most, but it is always followed by the reassuring feeling that Wabash men everywhere are engaging their surroundings, investigating others view points, and thinking critically in the same way I am; I just happen to be doing it in a different language.