Jake Brandewie ‘12 – In my travels this semester, I have discovered when telling people in South America that you are from Indiana there are two common reactions.  Most people shoot you a blank stare and ask if that is close LA or New York.  A select few, however, spark up like a kid on Christmas morning and say broken English “AH, I know Indiana…INDIANA JONES!” 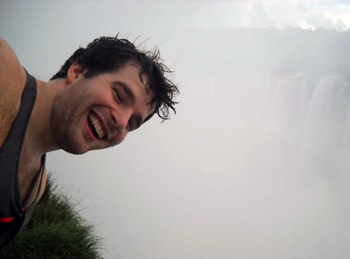 Jake at the edge of Iguazu Falls in Argentina

This comical association between Harrison Ford movies and my home state is a constant reminder that I am outside my comfort zone in all phases of my life here in Cuzco, Peru.  While abroad I have experienced differences such as the language barrier, greetings of kisses on the cheek instead of handshakes, different meal times etc. etc.  Daily, I wake up knowing that there will be moments when my Spanish speaking ability will dip below a preschool level trying to convey a response to a simple question.  Yet, learning how to adapt to these uncomfortable, frustrating moments has been an important lesson in my abroad experience so far.

When encountering these unfamiliar situations, the word that I prefer to implement that has the appropriate positive spirit is adventure.  For two weeks before the start of my program in Peru, I was able to slot some adventure while backpacking across Argentina and Uruguay.  The first highlight from the trek was traveling to the Iguazú Falls, which rest between the borders of Paraguay, Argentina, and Brazil.  The falls were enormous, over 200 hundred individual falls across nearly 2 miles of terrain.  The next was seeing the march of the “Abuelas de Plaza de Mayo,” which was a political protest of elderly women who had a grandkids disappear during the reign of the oppressive military government in Argentina. Witnessing this political protest at the presidential building in Buenos Aires was an awesome experience.  However, the main reason I have mentioned it in my blog is to prove to Dr. Gomez that I was at least coherent some of the time in class last semester despite my subpar display of language proficiency.

Now that my program has started in Cuzco, Peru, I have started to really immerse myself into my city.  Cusco is a place that is incredibly diverse and rich in culture, considering that its population is less than half the size of Indianapolis.  The city of Cuzco possesses an interesting mix of indigenous tradition (it is the former capital of the Incan Empire), Spanish colonial culture (the former center of the Spanish colonial empire), and international influence (major tourist hotspot due to its closeness to the ruins of Machu Picchu).  This three way melting pot offers me a blend of Incan and Spanish history to absorb and a vibrant nightlife, where you can meet peers that have traveled to Cuzco from literally all over the world. All in all, I am ecstatic for the future adventures that are ahead of me in Peru and cannot wait to experience everything my abroad experience has to offer.