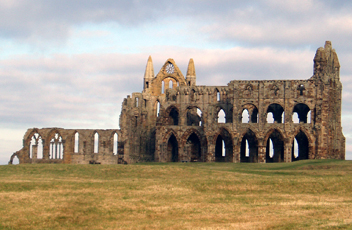 Donovan Bisbee ’12 – The walled city of York in the United Kingdom has a vibrant history which includes Roman occupation, Viking conquest and rule, the War of the Roses, and much more.  Upon arriving at the rail station in late January, I was immediately struck by the historic nature of York.  My five minute taxi ride to the University passed by an art museum, a theatre, and several pubs.

I have just finished my second week of classes and third week overall at York St. John University, and I find that it takes a bit of time to adjust to such a new and exciting locale. My first week here was spent getting to know the layout of the city and registering for classes. There are nearly 100 international students studying at YSJ this semester, and the international office here has organized different trips and teas (which I am quickly learning are a central part of English social life) for those of us here on an exchange.

At the end of our orientation week we journeyed to Whitby, a small town on the northeastern coast, and spent the better part of a day exploring and appreciating it. Whitby is, among other things, the home of Captain Cook, (whom you’ll recall discovered Australia) the setting of Bram Stoker’s Dracula, and home of Caedmon (arguably the first known poet of Old English).  Whitby also boasts the spectacular ruins of Whitby Abbey, originally erected in the 7th century.  A stop at one of the multiple chipperies completed the experience. 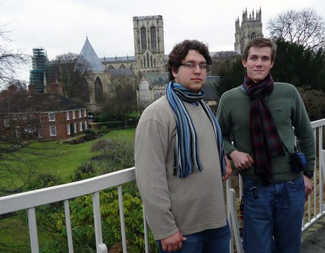 After that, it was back to York to prepare for classes.  I’m taking two theatre classes and one class on American literature.  Being a foreigner is an extremely interesting experience (for me this is one of the first extended stays out of the U.S.)  Craig O’Connor, who is also studying abroad in the U.K., and I have observed that you can dress as if you’re British, act as if you’re British, and even develop an affinity for baked beans as a breakfast food; however, as soon as you open your mouth, and say more than three words, it’s obvious to any Brit that you’re American.

In my American Literature class I became the de facto resource on American culture and society as soon as people found out that I was from the U.S.  I’m thoroughly enjoying my time abroad, and I look forward to traveling around the U.K and Europe. So far I’ve really only been to London, Whitby, York, and Grantham; however, I have plans to visit Cambridge, Canterbury, Edinburgh, and other places within the next few months. If I had longer weekends, I’d be tempted to try to walk from the site of the Tabard Inn in Southwark to Canterbury.  Unfortunately, I have neither the time nor the tales to pursue such a project. I’m already appreciative of the incredible opportunity this semester will provide, and I look forward to the adventure ahead.