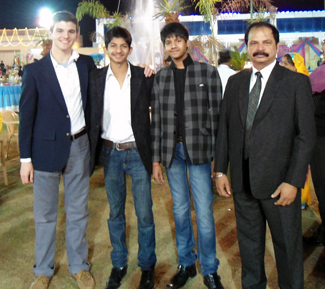 Andrew Kunze, far left, with host brothers and father at an Indian wedding.

Andrew Kunze ’12 – I’ve been in Jaipur for just over two weeks now, and things have been great. Right now it is the season of weddings in India. They schedule the weddings on the most auspicious days according to astrology. Most of the weddings (I’m told about 90 percent) are for arranged-marriages. In total, the wedding ceremonies take about seven days – several days of preparation followed by the wedding day, and then two receptions (one in the bride’s home-town and one in the groom’s).

The actual wedding day is a pretty big deal. The groom rides around town on a white horse, following an Indian marching band, a herd of dancers, and a group of men who carry heavy, intricate light-fixtures. As the groom gets closer and closer to the wedding site, they announce his arrival by setting off increasingly impressive fireworks. When he reaches the wedding-site, the bride is lifted up an a colorful chair/throne and has her own, smaller parade to the groom. I’ve been to two weddings so far, and I’m invited to another.

I’m living with a family that has two sons, who are 17 and 15. They’re a lot of fun. They’ve taught me how Indian teenagers celebrate Valentine’s Day. There are several, increasingly romantic mini-holidays leading up to February 14: Teddy-Bear Day, Chocolate Day, Hug Day, and Kiss Day. But if any of the boys have been sub-par valentines, girls are allowed to express their disapproval on February 15, which is Slap Day. 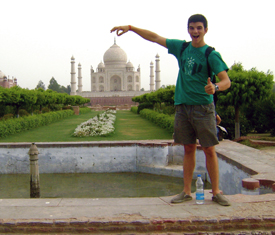 A little fun at India's most recognizable landmark - the Taj Mahal

My host-family brothers have also taught me how to play cricket (I don’t even play baseball, so you can imagine how terrible I am). The Cricket World Cup is starting soon, and India is the host country this year. Team India just beat Australia in an exhibition match, so everyone here is very excited.

Traffic here is chaos. The lines on the road are more suggestions than requirements. There are two types of rickshaws here – auto and cycle. Cycle-Rickshaws are big tricycles with a bench for three on the back. Most of the time, I use auto-rickshaws to get around town. Auto-rickshaws are tiny, three-wheeled, open-air cars that cost about 100 Rupees (about $2) to get across town. Though giving directions is difficult, even if you speak Hindi, because most of the roads don’t have names; you have to know neighborhood names and local landmarks in order to get anywhere.

Cows do whatever they want here. Traffic stops for cows.