Evan Bayless ’12 – A goal of my study abroad experience was to explore as much of Spain and the surrounding countries as time and finances would allow. My study abroad program recognizes that there is as much to be gained by the personal experiences and interactions as there are benefits from the formal classes. Understanding the people requires personal interactions and developing an appreciation for their culture, history, and way of life. 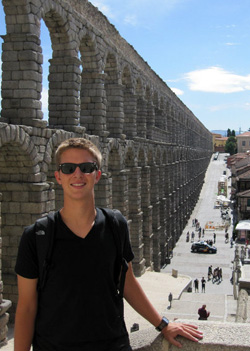 Bayless at the Roman Aqueduct

I am currently studying at the AHA International school in Segovia, Spain. Segovia is city of about 60,000 people and is located about one hour north of Madrid, in central Spain. Segovia is home to a Roman Aquaduct, Castle Alcazar, Segovia’s Cathedral (La Dama), and a vibrant old town that includes many restaurants, shops, and clubs. My classes focus on Spanish language, politics, history and the arts. I am also doing an internship with an artisan who works with metal, wood, and mixed media art. Through my interactions with the artisan and his business, I am beginning to understand the hardships and the benefits of running a local business in small-town Spain.

I left for Spain about one week before my classes commenced, the maximum time allowed by a student visa to Spain. When I arrived in Spain I stayed with my friend Rocío, one of the Spanish Wabash interns from last year. Roció’s family lives in Torrejón de Ardoz, a small town situated in thr outskirts of Madrid. While there, I was immersed in the language and began to understand parts of their culture. I witnessed the importance of family and friends, and siestas.

After a few short days in Torrejón de Ardoz I began traveling in early September with a weekend trip to the southern Spanish city of Granada. While in Grenada I walked the city streets and visited ancient Muslim palace, Alhambra. I spent several hours touring Alhambra’s gardens and palaces, viewing the architecture and antiquities. 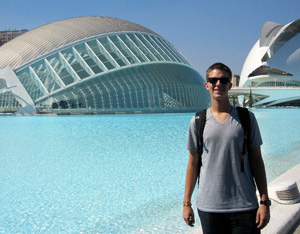 I targeted Fall Break, a 12-day period in early October, to do the bulk of my traveling. To kick off Fall Break, I went to Valencia, Spain and visited my fellow Wabash classmates Haoyuan Su and Steve Henke. Valencia is a beautiful, modern city on the Mediterranean coast. Haoyuan gave me a tour of the city where we visited the Cathedral, the Science and Arts City, and the beach. There were subtle differences in the Valenciano Spanish as opposed to the Castellano Spanish, which is predominantly spoken in central Spain. The restaurants served more seafood and paella as opposed to pig; but the Valencian night life was similar to that in Segovia… fiesta!

From Valencia, I navigated my way to London, England. My time in London was minimal and hectic. I visited the Tate Modern Art Museum to view some of the most famous works by Miró, Rothko, Warhol, and Hirst. The following day, I took a walking tour of London sites that included the Tower Bridge, the Tower of London, the London Eye, the Parliament Building, Big Ben, and Buckingham Palace. 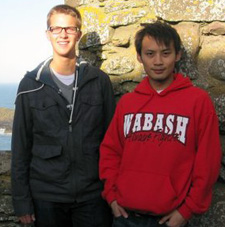 My next destination was Scotland. I landed in Prestwick, on the west coast, and took a train across the countryside to Aberdeen, on the northeast coast. My pledge brother, Bihui Liu, met me at the train station and took me to his residence at the University of Aberdeen. While at the university we met up with yet another Wabash student, Jake Peacock. Bihui and I visited Stonehaven, a small town near Aberdeen. We hiked a trail alongside the North Sea to Dunnottar Castle, believed to have been used as a fortress during the Dark Ages. I left Scotland and headed southward to France.

My French experiences began in Paris. While there, I visited the Cathedral of Notre Dame, the Louvre, the Pomidou, the Museum of Orsay, and the Eiffel Tower. Although I am not particularly fond of heights, I went to the summit of both the Cathedral of Notre Dame and the Eiffel Tower where I was rewarded with amazing vistas of Paris and its unmatched architecture. In the Louvre I only saw a few of the 35,000 works that are exhibited. I later toured the Museum of Orsay which houses a myriad of Impressionist works by Van Gough, Cezanne, and Monet. Before I left Paris, I visited the Pompidou and saw more modern and contemporary art (Picasso, Duchamp, Rothko, and Pollock) as well as the modern architecture of the building itself. 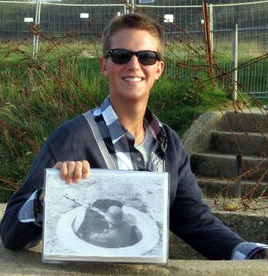 Bayless holds a photo of a Nazi soldier in a bunker like the one he's standing in.

During the last days of my Fall Break, I explored the French countryside and several sites dedicated to World War II. Initially, I ventured just outside of Paris to Versailles where I toured both the palace and the gardens. My journey then took me Caen, on the northwest coast of France. I went to the Caen War Memorial and then visited the beaches/ bunkers of Omaha, Utah, and Point du Hoc. I visited the American cemetery and saw the thousands of white crosses in honor of the veterans of World War II. I also went to the Sainte Mere Eglise and saw the paratrooper hanging from the church steeple in honor of the allied forces. I concluded my Fall Break travels by visiting Mont Saint Michel and returning to Segovia.

During the time since my Fall Break, I have taken several trips to Madrid. I attended the Real Madrid/ AC Milan soccer game, and I also went to a bullfight in the Plaza de Torros. I have spent many hours touring the Reina Sofia and the Prado viewing the compositions of Picasso, Dali, Velázquez, and Goya.

Recently, I made a weekend trip to Barcelona on the northeastern coast of Spain. While there, I visited Barcelonetta beach on the Mediterranean and viewed several buildings designed by Antonio Gaudi. I was astonished by the architectural genius in his creations of the Sangrada Familia and the Casa Milá. The Catalan culture of Barcelona is different from anywhere else in Spain and was punctuated by unique foods and a vibrant nightlife, shopping, and street performers.

My school also provides guided travel as part of the classroom experience. We have explored many castles and the mountain ranges near Segovia. Next week, the class is traveling to Andalucia, in southern Spain, to visit the cities of Cordoba and Sevilla.  I also have plans to travel with my classmates to Italy and Morocco during November.

Travel abroad is challenging but is facilitated by inexpensive regional airlines and an well-developed transportation system that includes trains, buses, metro (subway), and taxis. Hostels provide a reasonably inexpensive lodging option to hotels. None-the-less, the cost of my travels has not been insignificant.

Clearly, I am trying to take advantage of my study-abroad experience to explore Spain and the surrounding countries. My language skills and exposure to the arts have grown immeasurably during my stay in Spain and travels abroad, but more importantly, my perspectives on the world and the people with which we share it are forever changed. If you have this opportunity, seize it!