Reed Hepburn ’12 – I don’t mind, I’ve realized, being a vegetable in a gumbo, as opposed to another spoonful of the broth in a thin soup. I may be a potato in Paris’s demographic stew, but if my analogy is applicable on any sous-facie level, at least that means I represent a distinct entity to be recognized individually. 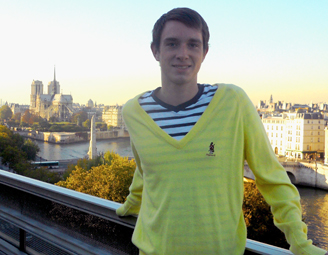 Hepburn has been contemplating life as a Parisian

As a fair-skinned, fair-haired WASP, I’m somewhat of a rare find in non-tourist areas here, and so far I’ve appreciated that. As I write this I realize that I really have no concrete evidence for the applicability of my analogy. Aside from the objective and undeniable contrast between Paris’s ethno-cultural heterogeneity and Crawfordsville’s lack thereof, I may be, quite frankly, full of it.

It is true, after all, that Paris seems to be an exceptionally tolerant city, exhibiting a laudable degree of color blindness and universal acceptance. Today, however, I met in my French class a student from Stratford-upon-Avon, and during our 15-minute break we had a thoroughly refreshing and comforting English conversation.

As I said good-bye to her after class, I marveled at how profoundly affected I’d been by such a seemingly mundane interaction, and at how quickly someone could metamorphosis from a complete stranger into a comrade, with whom I immediately felt an almost familial bond. The primary impetus for this connection was our shared mother tongue.

As fellow Anglophones (that is, potatoes), we quickly felt a kinship that in a homogenous society would never have developed, a solidarity that in many ways can only germinate in a demographically diverse environment. Of course, this observation on its own was unsatisfying — I don’t want to surround myself this semester with a bubble of American or even Anglo-Saxon culture, as I now began to realize would be extremely easy.

Digging a little deeper, I found an interpretation of this phenomenon that was, while less certainly proven, much more encouraging. If my British friend and I could reach such a level of solidarity so quickly over a relatively superficial connection, what’s to say this is unique? It only makes sense that every other stranger whom I silently, fumingly resent as they push their way onto MY already-crowded metro car, possesses some characteristic over which I could bond with him or her, if only we took the (sometimes immense) effort to peel back linguistic and cultural veils.

Maybe this is wishful thinking, but I’m going to stick to it and search out some okra or peppers or maybe frog legs. We’ll see.