Well, the past several weeks have been fairly epic (hence my prolonged absence from this blog). Here’s what it takes for Steve to loose touch with America.

1st—Homework! Classes to this point have been informative, but not particularly time-consuming. I’d spend an average of an hour a day on homework, half of which was time spent on studying the Habsburgs. This past week was comparable to a week at Wabash—papers, reading, and more than a few great conversations. Not much sleep. Though a little taxing, I’ve enjoyed the work, and my scholastic proficiency at Spanish has no doubt improved.

2nd—Sickness! on the evening of Thursday, September 30th, I noticed a slight sniffle, but chalked it up to a mild irritation and proceeded regardless. My conditioned worsened to a congestion-based paralysis of the face. In my bull-headed nature, I waited until the following Wednesday to go to the doctor. After taking the ½ pound/day of medications prescribed, I did notice significantly decreased congestion, though symptoms in some form continue to persist. Needless to say, the added health component has meant I’ve fallen asleep quickly. 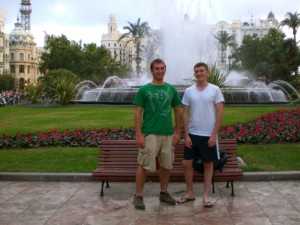 Going to the beach late in the season may have added to my sickness, but it was worth it.

3rd—Friends! Shane Evans and Evan Bayless both visited Valencia the week before spring break… Wabash friendships are special, and it was definitely great to see them in Spain. Shane in particular has traveled extensively through Europe, so getting his advice was great before setting off for fall break. 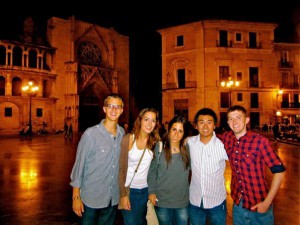 Which brings us to the major event of the past month:

A strong benefit of the UVA Valencia program is the built-in week long break—10 days to travel Europe. I traveled with Adam Andrews ’12 and Dan Chabala (a fellow Americano from Michigan State University) around Italy, Switzerland, and Austria.

Our journey started, appropriately enough, in complete chaos. Despite paying for expedited shipping well in advance, my Eurorail pass had not arrived on the day of departure. Thanks to a phone call from José, the rest of the problem was discovered: FedEx had received the wrong address from Eurorail. Thankfully, the package was delivered 2 hours before my train left.

Once in Barcelona, airport personal directed us to the correct terminal, security cleared us, and Ryanair staff validated our tickets. We had a leisurely dinner and strolled through some duty-free shops. We stood in the queue line for a flight to Rome, and noticed the flight numbers were incorrect (not to mention we were running early—a rarity for Ryanair).

Chatting with a flight attendant revealed we were an hour south of Barcelona Girona, and we had an hour until the gates closed at 9:20. But after an adrenaline-fueled sprint through Barcelona Prat, we caught our first break. Our taxi driver, Sergio, speeds like a racecar driver, enjoys throbbing techno music, and made €196 ($273) off of our mistake that night. But we arrive with about 20 minutes to spare (we tipped well). Chris, another friend traveling with us from the program, used this extra time to look for his plane ticket, which he had losted (he printed out another one and was the last person to board the plane). 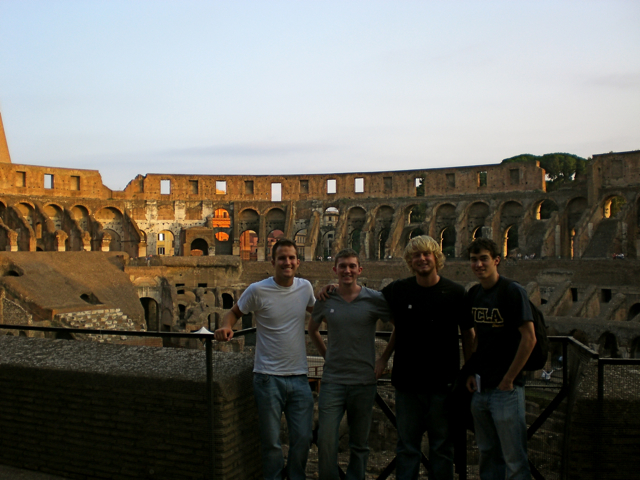 The start of an epic fight to get home

The first two days were chaotically spent in Rome. Naturally, we had planned our trip during the last U-2 concert in Europe for their 360° tour, so finding a hostel was next to impossible. But with a bit of maneuvering, we found one place in the city and on the outskirts—complete with a full kitchen.

In Rome, Chris discovered yet another problem: he’d lost his Eurorail pass. He spent his time in Rome talking with police to get the situation resolved and eventually return to Valencia.

We, however, explored Rome with insatiable ferocity—the Coliseum, the Vatican, the restaurants—we of course failed to see about half of the Eternal City, but we certainly took advantage of our time. For two nights, we stayed in a small bungalow in the suburbs of Rome cooking pasta for dinner and sleeping late into the morning.

On Sunday, we left for Switzerland via train. After a long train ride (this came to be a motif of our journey), we were greeted in Rappersville, Switzerland by none other than Michael Opieczonek ’09. A phenomenal home-cooked dinner awaited us—meatloaf, salad, mashed potatoes, and, of course, Swiss chocolate for dessert. To compensate for over-eating, we went on a extensive walking tour of Rappersville. 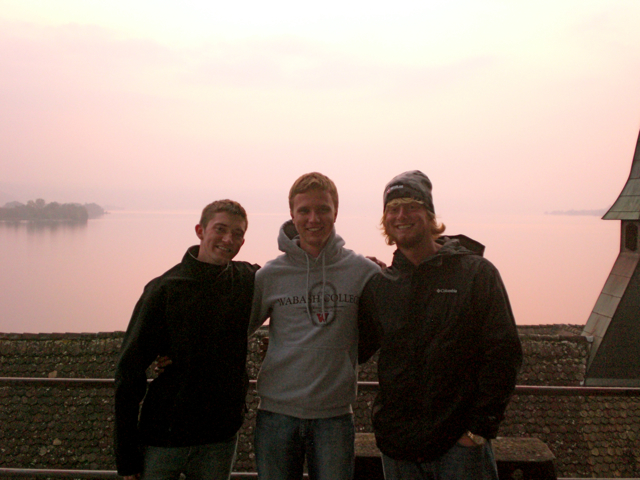 Incidentally for Opieczonek, Rappersville is dominated by a castle restored by a Polish benefactor. Michael’s Renaissance apartment overlooks the castle square, a first-rate coffee shop, and a music store. In fact, we were so impressed by Rappersville that we spent the next day planning and exploring the small Swiss towns. After an enjoyable Wednesday in Zurich, we left via night train to Vienna, Austria still enamored of Switzerland.

Vienna was primarily selected for its phenomenal fine arts museum. Soon after checking into our hostel, we trekked across the city to the Kunsthistorisches Museum, which included quite a few portraits of the Habsburg family. While in Vienna, we also visited the Albeterina, which contained some Picasso works inspired by Habsburg portraits…a true liberal arts experience that made me miss C&T.

In Vienna too, another European Wabash friend saved the day. Maria Fraczek, a former language intern at Wabash, gave us a first-rate tour of Viennese cathedrals, and later an authentic Austrian dinner. As a pastry aficionado, I highly recommend Fraczek apple strudel. 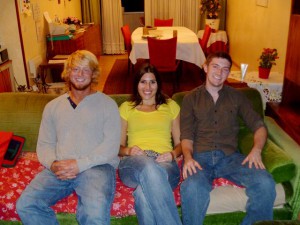 After a night full of cultural conversations and food, we set off for Innsbruck, home of Ferdinand II’s Schloss Ambras.

There are certain downsides to being completely ignorant of the German language, not the least of which is traveling difficulties. Thanks to a miscommunication with a train conductor, we ended up in Salzburg, Austria (translated from German, “the Salt Fortress”) and needed to wait 90 minutes for a train back down to Innsbruck. We arrived in Innsbruck thoroughly confused, tired, and too late to go to the museum.

Things headed even further south at midnight. In addition to a remarkably slow Saturday night in Innsbruck, it began to rain. We went back into the train station to wait for our 3:40 AM departure for Valencia.

Our plan was to ride from Vienna to Zurich, to Montpellier, France, to Barcelona, Spain to Valencia. An arduous (25 hr) train ride, but not a bad way to see the countryside, read some books, and save some money.

Unfortunately, our train ride to Zurich was delayed, so we missed our connection at Zurich. We took this in stride, and found another connection through Geneve. Not a big deal.

French workers had other plans for us. A strike in France essentially shut down travel through the majority of the country. Our best option was a boat from Lorenzo, Italy to Barcelona.

After a regrettably short night’s sleep in Milan, we took the four hour train to Lorenzo. On the train, I commiserated with an Italian couple, and it seems we weren’t the only ones to face such problems travelling by train. It was comforting to know our inability to get back to Spain wasn’t actually our fault somehow. And we certainly saw our share of Americans dealing with the situation in a less-than-gentlemanly manner.

Upon arriving in Livorno, we quickly made our way to the dock… or at least tried. Despite the good intentions of two Italians, we were thoroughly lost. After many unfruitful, multi-lingual exchanges, we found a woman that confirmed the existence of our boat and sent us off in a taxi.

Our “Mediterranean cruise” was survivable at best. Ferocious waves, unappreciated live music, and, of course, a noisy baby inhibited both sleep and work. But we surived, and arrived to take the 1 A.M. bus to Valencia.

So, at long last, I fell into my Valencian bed at 6:00 in the morning on the 20th of October. And made it to class the next morning. 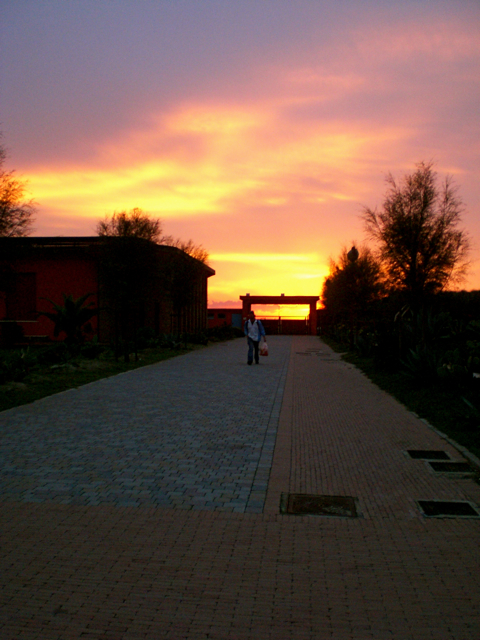 The long road to the boat in Livorno, Italy, punctuated by a beautiful Tuscan sunset.