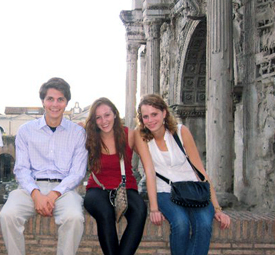 Cassady with friends in Rome

Robert Cassady ’12  – It is amazing how quickly a foreign city can become your home. I have been in Rome now for over a month, and I feel quite at home. This is rather surprising because Rome is so drastically different than my hometown (South Bend, IN) and of course Wabash College. As I do not speak Italian, the extent of my communication with Romans is usually limited to simple greetings and gestures to purchase things like food and as of last weekend contact solution.

One of the biggest changes for me was living in a big city. Rome is not full of huge skyscrapers thankfully, but it is still a massive city that can take more than an hour to travel across by bus or a few hours walking. And of course the food is different but (with as much respect as I can give to Sparks, whose food I enjoy) admittedly much better. So it did not take long to get used to the new cuisine.

So I am in a foreign place, but at the same time the true beauty of the city almost forces you to fall in love with being here. All of the well known sites (St. Peter’s, Pantheon, Colosseum, the Roman Forum,  etc.) are as wonderful as everyone says and usually much more fantastic., but some of my favorite experiences have come from getting lost in all of the little side streets of the city. Rome has the worst city planning of any city I know. Yet there are so many beautiful sites hidden in alleyways and off the beaten trail that you can never be angry with the city when you inevitably get lost. I feel comfortable walking out into the city for the day without a map and only a few euro in my pocket, because I am getting to know the city more and more everyday. I know that by the end of the trip it will be tough to say goodbye to what is now a Rome away from home. 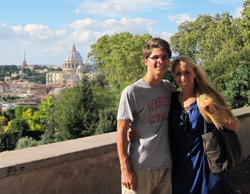 My classes have been great here. They are rather intense but well worth the effort. I am taking Latin, Greek, and a course called the Ancient City that is essentially an historical and archaeological study of Rome. For the Ancient City class, we have taken some amazing field trips. Most notably we were able to walk in two Roman aqueducts. It was an incredible experience, and really allowed me to intimately learn about Roman engineering. I also spent a week in Sicily on field trips, which I will write about later.

I will end this entry by saying that the longer I am away from Wabash the more I miss it. Some would call me crazy for longing to be back in Crawfordsville, and I would agree. I think all Wabash men are a little bit crazy to have chosen to seclude themselves in the corn fields of central Indiana, but we are all the better for it in the end. I am excited to bring back my experiences from Rome and share them with my colleagues.