Chandler Jacks ’20 —  This summer, I was awarded the Rudolph Scholarship to attend the International Summer Universität in Kassel, Germany. This was an absolutely incredible experience. I took three classes over the summer, studying the German language, history, and politics. I was paired with a host family, of which my host father was the director of the annual Brother’s Grimm festival, as the Grimm Brothers (the ones that wrote the fairy tales we grew up on) were originally from Kassel. I attended many museums and landmarks in Kassel, Marburg, Freiburg, and Berlin on excursions with the class. I also got the marvelous experience of meeting people from all over the world, as my classmates consisted of fellow American students from the east coast, as well as Italian, Chinese, Indian, Australian, and Russian students. Between the experiences of classes, exploring the various cities, entertaining guests at my host family’s house, and going on nature hikes with the Teacher’s Assistants, this has to be the absolute best summer experience of my life, and the Rudolph Scholarship was immensely helpful in making this dream of a trip a reality! 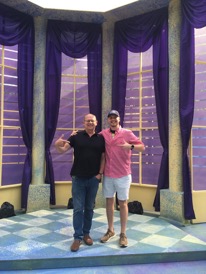 (Right photo) This is my host father from the trip, Peter Zypries. He is the director of the Brothers Grimm Festival in Kassel, as well as the director of a contemporary play that features classic Grimm fairy tale stories juxtaposed with classic rock to make a more engaging experience. He is the mastermind behind replacing the lyrics to hits from AC/DC and Queen with exposition for a theater production. 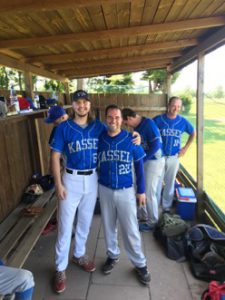 (Left photo) This is Kai Söther, head coach for the Kassel Herkules independent baseball club. Before I left for my summer class, I discovered that Kassel had a baseball team and sent him an email explaining that I was a pitcher from the United States and would be interested in coming to watch a game or practice to see how German baseball compares to American, but he responded that because I was American, he wanted me to play some weekend double-headers with the team. Playing baseball abroad was an incredible experience, the guys were very friendly and inviting, and we even got beer and brats after the game on the house! I would definitely recommend other athletes try to play their sport abroad for the story and experience alone. 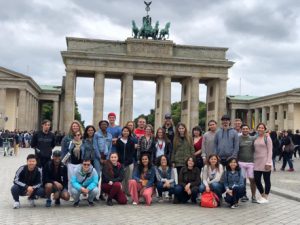 (Right photo) This picture is from my class trip to Berlin. Although not every student is not pictured (the trip cost extra so not everyone in the program could come), this is a great representation of some of the experiences gained with the International Summer University Kassel. Most of the students pictured are from all over the world: Italy, China, Russia, Ukraine, Singapore, Australia, and Portugal are present here. 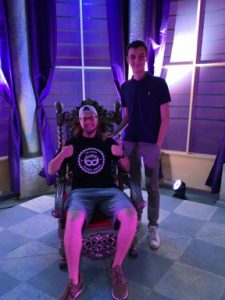 Chandler Jacks ’20 and Giorgio Cardani, at opening night of the Brothers Grimm play.

(Left photo) This picture was taken the opening night of the Brothers Grimm play. After the production, my host father let us on stage to get a picture with the set. The student pictured here is Giorgio Cardani, an Italian student living in Switzerland. Giorgio was the only student in the program who was not yet a college student at the time, and as he was the same age as my little brother, I sort of took him under my wing so he wouldn’t feel left out from the group. He told me that the night of this picture was the first time he’d ever been on stage and was very grateful that my host father let him attend the play.