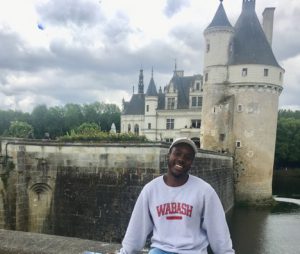 Rogeno Malone ’20 — This summer I was able to study French language, art, and architecture in Paris. Perhaps the biggest lessons I’ve learned studying at a liberal arts college is that one must make the uncomfortable – comfortable, thrive in diversity, and not be afraid to take risks or fail. I preface with those teachings because intentionally, or unintentionally, I experienced each of those lessons during my time in Paris.  Paris is diverse and depending on where one stays can feel uncomfortable. That’s not to say that everything in the city is flawed, no instead I found the true charm of the city in these faults. Earlier in the year during spring break, I visited Paris briefly with a Wabash group consisting of two courses (FRE-302 and FRE-202) but I did not get to experience ‘authentic Paris’ as the group stuck to many tourist attractions. Thus, returning for the summer, I was determined to traverse the city as a true Parisian. The distinct qualities of the city that usually deter tourist became charms I learned to embrace – need it be rush hour in the metro, street busking early in the morning, or the nonstop sounds of city life. 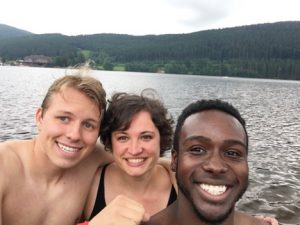 Making the uncomfortable – comfortable. The biggest obstacle I faced occurred in the first week of my program, but I believe it positively impacted the remainder of my study.  After landing in Paris, I learned that my host family could no longer host me, so I was reassigned to an apartment. I rationalized that although I wouldn’t be experiencing French home dynamics, I could still practice my French and traverse the city with my roommate. However, this idea wasn’t realized as my roommate did not show up. At this point in my study I realized two things – I was alone and uncomfortable in Paris, and that if I wanted to increase my language skills, I would have to take risks and not be afraid of failure. I failed many times, speaking, asking confusing questions at street markets, or having someone respond to me in English instead of French. But, by continually engaging in these conversations and asking for help, I eventually interacted with the city personally instead of as an outsider. 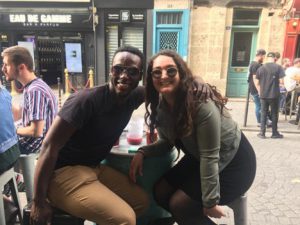 In addition to these interactions, I took an intensive language course at the Catholic University of Paris, as well as an arts and architecture course through my host program. The arts and architecture course was described as an experience where “students would see more of Paris in the course than most Parisians have seen in their lifetime,” and to this day I believe the validity of that claim. Each day the course had a different meeting location, allowing us to discover various museums, structures, or architectural anomalies in Paris.  Some of the sites I visited included: The Opera, Montmartre, Centre Pompidou, La Villette, and Jardin d’Acclimatation. 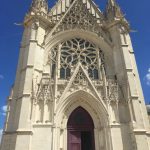 My favorite site was the Musee d’Orsay, more specifically an art exhibit focusing on the contributions of black models in Parisian art history. In this exhibit, I learned of Gericault’s involvement with abolitionism as he worked extensively with a Haitian model, Joseph, and even featured him in The Raft of The Medusa, evoking solidarity with this marginalized group and providing abolitionist with a symbol of hope.

I also experienced excursions to Claude Monet’s house in Giverny and saw the renowned water lilies, learned about two Châteaux, Chaumont and Chenonceau, and their attachments to the wife and mistress of Henry II, and toured Europe where I met Chris Barker ’20 and former German teaching assistant Pia Schübel in Titisee-Neustadt.  I am incredibly thankful for the Rudolph Family for providing me with this opportunity as well as the various faculty and staff who assisted me throughout this process.