Jake Peacock ’12 – A lot has happened since my last blog entry. I got into an immersion course to Peru, I went to Amsterdam and Ireland, and I found out my good friend Matt Kraft ’10 (who is teaching in Spain for a few years) is coming to visit me in Aberdeen during December. Also, Wabash won the Bell Game. Will Liu and I frantically tried to find a way to watch or listen to the game online. We got the radio to work just as soon as Whitehead went on the field to give Wabash its first few points. Missing such a great game made me realize just how much I actually miss Wabash. However, I’m holding off sentimental remarks and whatnot for later blog entries. So, let me tell you about Amsterdam. 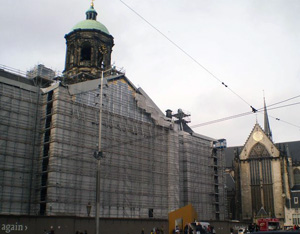 Early in November I decided to take a bit of time off from Scotland, and ventured to the European continent for a little while. The most enlightening thing about the trip has been how different the UK has been from, at the very least, the Netherlands. Things have been considerably more expensive here than anywhere I’ve been in the UK, even at Heathrow airport in London. Everyone knows more than one language. That might have to do more with the Netherlands than anything else, though. English and Dutch are both considered national languages, although Dutch is the default. That being said, even people who were clearly speaking French or Spanish amongst their friends ahead of me in a queue would switch to English when dealing with whoever was working at the bar, cafe, or where ever. It seemed that fashion matters here more than in the UK or the US as well. Every clothing store I have seen has been a famous designer outlet with extravagantly over-priced items.

Amsterdam, sometimes called the Venice of the north, is quite an interesting place. Marijuana is decriminalized, prostitution is allowed within registered brothels, there is a separate lane in roads for bicycles, there are more bicycles than people, and most of the city is below sea-level. The below sea-level business makes it so that all of the construction in the older parts of Amsterdam are very, very cramped. Additionally, it means that the port city requires a lot of canals to divert water. And canals there are. Everywhere. 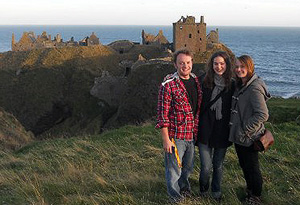 Peacock, with friends, at Stonehaven, Scotland

Dublin, Ireland was pretty interesting as well. I’m definitely going back, even though the trip itself was somewhat of a fiasco (everything was delayed, I ran into some unexpected money issues, etc., etc.). People there take a lot of pride in being Irish—many pubs had live Irish music every night, which was really cool. Everything was written in Celtic and English as well. I ended up going around the city sight-seeing. St. Patrick’s Cathedral was especially impressive. It was a bit sad being there, though. Because of all the financial troubles there, many people my age and younger are on the street. Nonetheless, Ireland is one of the best trips I made.