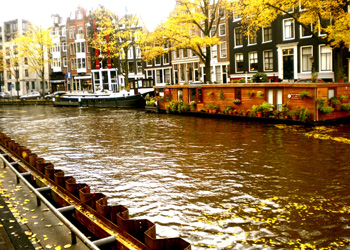 The canals of Amsterdam

Terrence Sullivan ’12 – In recent weeks I have been busy. Between the rush of term papers and tests I have found my way around a portion of the continent. As my days here in merry ol’ England draw to a close I cannot help but reflect on the three best weekends I have spent here Europe. Traveling in the last days of my stint in England has been exceedingly rewarding. The cosmopolitan bustle of Paris, the laid back attitude of Amsterdam, and the natural beauty of Scotland, have been the scene for my most recent experiences.

First came Scotland, where a three-day bus tour of the highlands, boring as it might sound, was, to say the least, exceedingly pleasant. I, accompanied by four lovely ladies, ventured into the highlands with a group of 30 or so people to learn a bit of history, and see the country in all of its glory. My hopes, as you may guess, were not particularly high when I heard of what we were doing. Boredom came to mind because I expected to be sitting on a bus listening to a graying old man talk about castles, cathedrals, and Culloden. Boy, oh boy, was I worried when I stepped up on the bus to see a bus driver/tour guide whom appeared younger than I. The bright young man named Dan, age of only 23, took me by surprise with his patchy muttonchops, messy hair, sweat stained shirt, and sarcasm. He was wearing a raggedy kilt and a genuine smile as I walked past, and I couldn’t help but underestimate the poor fellow’s intellectual competency. 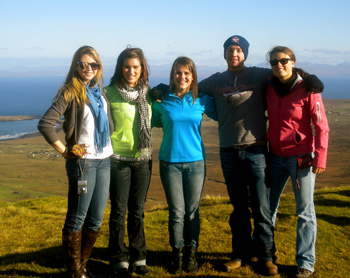 Sullivan and friends in Scotland

Within minutes of being on the bus, however, we, a group of Aussies, Kiwis, and Americans, were assaulted with jokes about the English, dates of battles, and historical facts you couldn’t learn in a basic “History 101” style textbook. Music was played when Dan’s Scottish brogue wasn’t, and stories were shared when we grew tired of the music. His taste in music was awful. It consisted of Spice Girls and Backstreet Boys. Dan was forced to share lots of stories. The first day was a hoot. I knew this tour would be rather different from traditional bus tours when our first stop was a Scotch Distillery. “When in Rome,” right?

The next days were spent climbing mountains, exploring woods, learning about the highland way, and experiencing the highland hospitality. Scotland’s natural beauty sent a shiver down my spine. As I stare back over the pictures I am dragged back to the sublime experience standing at the top of a mountain, trekking through the forest, or losing a pub quiz with some new friends.

Amsterdam was not as I expected either. Such an amalgamation of peoples in tourist form was bound to be confusing and stressful. Such an amalgamation of tourists, whom are all in an altered state of mind, was not confusing or stressful. Everyone seemed to be very helpful and friendly. The city, although massive, was easy to navigate. Set up on a system of canals, the grid like city offered an odd beauty. The canals shimmered in the sunlight, and the bikes, all painted different colors, lining the bridges looked natural in their positions. Three days we spent wandering around the city, and in those three days we never saw the same thing twice. I do regret not going to the Van Gogh museum, but for nearly 20 Euro I decided to wait for Paris to see the great post-impressionists.

Planning Paris was the biggest obstacle to the trip. There is so much to do in the massive city that in four days you lose your mind simply trying to cut the list down to a manageable size. Trying to keep on a budget, I spent my Paris trip eating baguettes and drinking wine that was cheaper than water. However, the summation of my eating experiences isn’t the reason you are reading this blog entry. 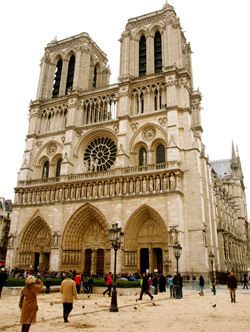 Where I visited in Paris: Arc de Triumph, Eiffel Tower, Museum D’Orsay, the Louvre, Montmartre, Notre Dame, Champs Elysees, and the Pere Lachaise Cemetary. Short list, yes, but I only had four days. The city is titanic, and for reference, it took 45 minutes by underground to reach the Eiffel Tower from my hotel. Since I had been waiting from Amsterdam to see post-impressionist art, I was the most excited about the Museum D’Orsay. But, I suppose the Mona Lisa and the Venus de Milo were fairly magnificent as well. Notre Dame’s Gothic style achieved its goal of making me feel small and terrified. But, above all other tourist attractions, the one leaving me with a lasting tingle in my spine was the obscene patriotism that accompanied the Arc de Triumph and its massive French colors waving underneath.

The Arc looks over Champs Elysees, and instills inordinate amounts of national pride on anyone who gazes upon it. Despite obviously not being French, the Parisian culture envelops you the moment you enter the city. The language, art, and people all have pride in where they live, and their way of life. Rarely, when venturing outside the tourist attractions, is a word of English spoken. Montmartre’s art market is marvelous, and the nightlife was incredibly entertaining. Meeting people while simply wandering the streets, having conversations in a sick linguistic merger, and laughing at the results contrasted the touristy day experiences quite nicely. Somehow, someway I will be going back to Paris for these reasons.

Now, however, these last weeks involve more papers, tests, and, of course, finals. So, for the next 15 days, I wait patiently for my Italian excursion with hopes it has as much to offer as these previous month. Until then I’m simply biding my academia filled time with prospects of returning to Indiana and Wabash.