This summer I had the amazing opportunity to study in Rome, Italy for four weeks. During my time in Rome, I was enrolled in a class titled Exploring Rome, the Birthplace of the Modern Museum. Through this class, I was able to learn an extensive amount of history about Rome, the Roman Empire, the influence of the Pope, and other historical facts that I did not know. Our class would visit various historical sites and museums in Rome such as the Vatican Museums, the Colosseum, and the Roman Forum, as well as many other sites within the city. We also made trips to sites outside of the city such as the Uffizi Gallery in Florence, the Fountain Gardens in Tivoli, and much more. In the five weeks that I spent in Europe I was able to travel to five different countries in Europe.  I would have never known to visit these wonderful sites if I had not been blessed with receiving the Rudolph Scholarship.

The most impactful place that I visited while I was in Rome was Basilica Papale San Paolo Fuori le Mura, known as the Church of St. Paul outside the Walls. It is the burial place of Paul, one of Jesus’ 12 disciples, who was martyred for his faith while in Rome. It is called St. Paul outside the Walls because the Church is located outside the ancient walls that lined the city of Rome. Because it is located on the outskirts of Rome the church is less crowded and feels more peaceful. Unlike the Church of St. Peter inside the Vatican which gets over 30,000 visitors a day, St. Paul’s church is far less crowded, allowing me to take in the beauty of the Church. In 1823 a big fire burned down the entire Church, but through the generous donations from Royalty across the world they were able to rebuild. That is what I found to be so special about this place. You could look around and see all the different stones, such as the thin-cut alabaster stone that acted as stained-glass windows with its unique patterns which were donated by the Royal family of Egypt. You could get a sense of how important this Church and its history were to people all around the world.

This trip has been so impactful on my perspective of the world. Furthermore, it has given me the itch to want to go see more of what the world has to offer. For anyone who might be contemplating a trip while at Wabash, just do it. There will never be a more opportune time to travel. Through generous funds such as the Rudolph Scholarship and other means, Wabash will help you get to where you want to go. Take advantage of these opportunities by going out and exploring. 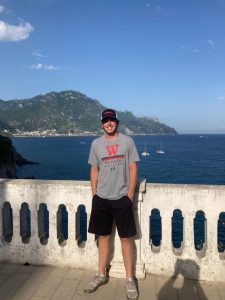