Ethan Kanzler ’20 — We’re not all that different

This summer I was able to spend two months in Germany. I was able to travel to some of the most important cities in the country. I was also able to see many international landmarks that I have wanted to see for many years. All the while I was able to work on my German language skills and be immersed in the culture. I spent the first two weeks in Heidelberg on a class trip with Professor Redding and then I spent a week traveling to Munich, Berlin, and Salzburg. I spent the most time in Freiburg studying with the Goethe Institute. It is a beautiful city and being so close to the Black Forest I was able to see so many incredible views.

The most interesting thing about studying at the Goethe Institute is how International it is. Not only are the students from all over the world but they were also anywhere from 17-45 years old. I was in class with a few students from America but there was also a girl from Ukraine who DJ’s, a guy from Mexico who just wanted to learn German, a guy from New Zealand who wants to work in Germany, and another guy from Slovenia. Those are just a few of the countries but there were many more. I was a little concerned about making friends, but I was surprised at just how quickly we all bonded. Before I knew it, we were all sharing things with one another that usually takes people months, if not years, of friendship to divulge. You can see from the picture of some of my friends that we are close, and this picture was taken three days after we had all met and we were already going on trips together. We did everything together and it never really mattered what our background was or where we came from, we were all instantly friends. We talked about everything from politics in your home country, to movies and music that we liked, to the things we loved about Germany and what we wanted to do with our lives. It was an incredible experience that I would recommend to everyone if you have the chance. 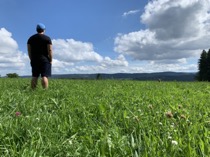 Another short story I have about how we are not all that different from one another is a conversation I overheard between a mother and her child in a shopping area. The son was begging his mom to buy him the new Nintendo Switch and his reasoning was that he would play less on her phone and she just shook her head, chuckled, and said it’s not that simple. I laughed so hard because, 1) that conversation was in German and I understood it and, 2) that is an exact conversation I had with my mom as a kid. Germany is a fantastic country and without the help of the Rudolph family I would not have been able to have this experience, so I would like to extend my sincerest gratitude to the Rudolph family for their generosity. In a time of such turmoil and division world wide I am grateful for this experience and what it taught me. Being so far from one another it is easy to forget that we all have the same fundamentals of being human with the only difference being the way that we talk. I think it’s important for us to remember that as we move forward.