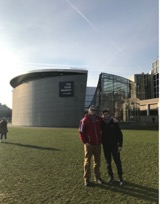 Benjamin Mossoney with Nathan Young at the Van Gogh Museum

Benjamin Mossoney ’20 — I took a Pablo Picasso class while abroad in Valencia, concentrating on his pioneering of several styles and social commentary. The Givens scholarship enabled me to travel to several cities to experience Picasso’s work directly, and also some work that had a substantial influence on Picasso.

The Musée National Picasso-Paris has one of the largest Picasso collections in the world. While visiting this Museum in Paris, I followed Cubist works of Picasso, and also several other artists. The Centre Pompidou also had an extensive collection of Cubist paintings.

I visited the Reina Sofia while in Madrid, and this is where I was able to observe the breathtaking “Guernica” which depicts the town of Guernica being bombed by the Nazi party during the Spanish civil war. I spent nearly an hour analyzing and taking in this miraculous painting. Noting specific areas of Picasso’s techniques and how they blended into his social criticism was an incredible thing to be able to do, and I will never be able to replicate that experience in my life.

I took a Holocaust class my Sophomore year at Wabash, co-taught by German Professor Tucker and Political Science Professor Hollander. While Picasso had much to say concerning the Nazi party and the second great war, I was able to see some hugely influential memorials while I visited Berlin. I went to the Jewish Museum and also the memorial of the Murdered Jews of Europe. I deeply pondered the significance behind these memorials and also how Germany handled commemorating their misdoings from the Holocaust. Underneath the monument to the Murdered Jews of Europe is an entire museum that has thousands of stories of Jewish families. Berlin was one of my last trips, and seeing the memorials that we discussed in my Holocaust class was one of my favorite things that I did in Europe.

I want to thank the Givens family for their profound generosity. Their selflessness empowers Wabash men to experience things that they have directly learned about in the classroom and transition them to the real world. Without the Givens scholarship, I would not have been able to go to many of these sites nor gained the appreciation and knowledge I now have for Pablo Picasso, and his social criticism.