What?: My travels were not limited to Spain as Joel Janak ‘19 and myself tackled Morocco. El Badii Palace was completed towards the end of the 16th century and was a lavish display of the best craftsmanship of the Saadian period. This was one of the most important stops on our trip because it encapsulates the Arabic architecture found in many northeastern Spanish cities.

I am currently taking the Spanish course

SPA-47407 “Introduction to Spanish Art,” which investigates the rich 19th and 20th-century Spanish art. Additionally, Dr. Enrique Peláez has provided us with an analysis of Roman, Medieval, and Gothic influences. Our class has visited several museums and cathedrals in Spain to explore topics from the ‘Golden Age’ of painting (Velázquez, El Greco, Murillo, Ribera), to the famous names of the 20th century (Gaudí, Picasso, Dalí,Miró). 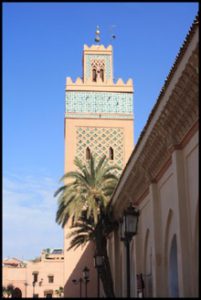 With the gracious contributions of Mr. and Mrs. Givens, I was able to visit several exhibitions of Spain’s two greatest 20th-century masters: Pablo Picasso and Salvador Dalí. In the classroom we learned the evolution their style, its context in history, and its legacy. However, when I observed the massive canvas I immediately felt a connection. The anti-war message is especially relevant to the increasing tensions of the 21st century. I could not leave the museum without purchasing replica bookmark 🙂