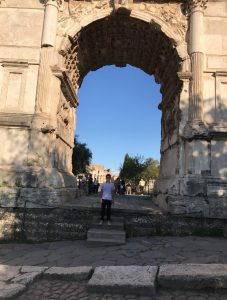 Michael Lumpkin at the Arch of Titus

Coming into my Junior year at Wabash College, I had not given the study of Western European Art nearly the time or attention it deserves. Over the past 9 months, through my studies at Wabash College and my study abroad experience so generously supported by the Given’s Family, I have had the opportunity to learn and capture the essence of what art means to our world. At Wabash in the Fall of 2016, I took Dr. Hartnett’s “Roman Art & Archaeology” class, an experience that opened my eyes to the splendors of the art world. This newfound interest inspired me to take the “Introduction to Spanish Art” class spring semester here in Valencia, Spain at the University of Virginia in Valencia. This class has allowed me to look at the different periods in the history of Western European Art, with a special focus on the artists and influences present in Spain.

Combined with my classroom experience, I have been lucky enough to travel and see some of Europe’s finest art first-hand. In April, I visited the Rome, Italy, where I spent time at the Roman Forum. Much of the art and architecture that had previously consisted of the Roman Forum has now been destroyed over the centuries, but one sacred piece of art that remains is the Arch of Titus. On the Arch, one can see the vivid imagery of battle during the Roman period, religious depictions, and how Emperors of the time portrayed themselves to their people. These were images the Roman people saw daily, as they traveled on Rome’s main road under the arch, the Via Sacra. Having just had seen pictures of Victory Arches like these before through my “Roman Art & Archaeology” class, the opportunity to see the Arch of Titus in person was an experience I will never forget. A second experience I found captivating was my visit to the “Sagrada Família” in Barcelona, Spain. A Basilica still yet to be completed after over 100 years of construction, and a creation based on the vision of artist Antoni Gaudí, this building is covered with incredible artwork both inside and out. Lastly, my experience visiting the Prado Museum in Madrid, Spain is something I will never forget. Especially the works Francisco Goya, which portrayed historical scenes in incredibly vivid fashion, left me captivated at the images and with a further understanding of history.