Tianhong Xu’17 — First of all, I would like to thank the Rudolph family, who offered me an opportunity to take a month-long German language program at the Goethe Institute in Hamburg, Germany. With this opportunity, I had more chances to learn German not only in classrooms but also in real life situations.

My learning did not start with the program, but on the flight over. Before arriving at the Goethe Institute in Hamburg, I had an opportunity to meet one of my high school classmates in Paris, France. I had a flight to Hamburg operated by Germanwings, which was the time I spoke German in Europe for the first time. 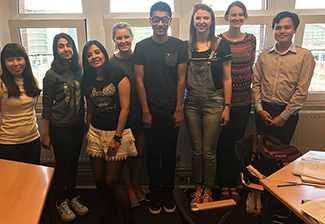 I was sitting in the 11th row in the flight. The flight attendant was doing cabin catering services, providing drinks for the passengers. I was not quite able to understand the substance he said with the front passengers, but, I knew that it was German. At the same time, I was so nervous: I will not be able to understand his sentences. What should I do? How embarrassed I would be!

The flight attendant had already been catering row 10, and he would reach row 11 at any second. My heart went to pit-a-pat suddenly. The flight attendant asked: “what drink would you like?” I did not realize he would use English to speak with me. “Orangensaft (orange juice)” just escaped my lips. “Here you are,” he said. “Danke schön. (Thanks very much)” “Bitte schön. (You’re very welcome.)”

It was a short conversation, but it was totally unexpected. That’s probably the start of my German language learning in Europe. Teachers in the Goethe Institute gave us a chance to learn German in a way that was different than my language learning at Wabash, due to the short duration and intensity.

My teacher, Kathrine, introduced us a relatively different learning method for learning German as a foreign language. Even though we know memorizing new words and phrases should be conducted by the students, Kathrine would use a large amount of class time to help us remember them. She asked us to match words and the corresponding pictures. Compared with the method of after-class, self-learning at Wabash, this study method actually did accelerate the speed of familiarizing and memorizing the new words and phases for us.

Also, Kathrine spoke German all the time. Even I could ask questions in English, but she would always reply me with German. In the beginning, I was not totally comfortable with that, but, as time goes on, I am totally fine with her all-German class atmosphere. By this way, I feel like I have a better grasp of the listening part of German.

Even though one month is a short period for language learning, I was able to use German to deal with some basic real-life situations. For example, I spent one weekend exploring the rich history of Berlin (about 1 hour and 50 minutes by train) and was able to ask some basic questions like, “How do I get to the Berlin Wall?” and “Which subway I should take to go to the Brandenburger Tor?”

In the meantime, I met lots of classmates from all around the world: Thailand, Malaysia, Italy, Bangladesh, Turkey, Scotland (I learned that some Scots do not identify as being British) and more.