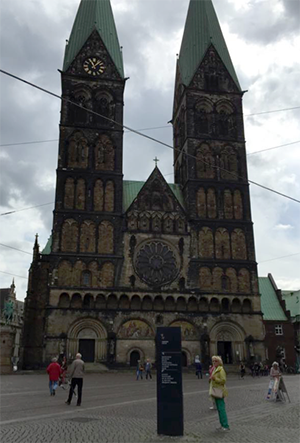 Timothy Locksmith – First helpful tip about living in another country for any amount of time… It’s a hell of a lot easier if you speak the language fluently! I came to Bremen with the goal of improving my German at the Goethe Institute here, but man the way I handled my trip was a bit like learning how to swim by being thrown into the deep end of the pool.

My flight to Hamburg was scheduled and easy enough to get to since I took off from Orlando and only had a layover in New York (both airports I am relatively familiar with, and everyone there speaks English). However getting from Hamburg to Bremen (a bit over an hour trip by train), wasn’t quite so easy. I was up for a bit of a challenge so I didn’t buy my tram/train tickets ahead of time, and told myself I was going to only speak English if I really got into trouble.  Long story short, Germans speak very quickly so any of the directions I was given meant absolutely nothing to me. So I asked for a “Stadtplan” (map) and figured it out by myself after a while, since I was a bit too embarrassed to ask them to repeat themselves for a fourth time. Eventually I arrived safely in Bremen, and after I was finally settled into my room and had taken my placement tests, I realized that I hadn’t slept for the past 28 hours (34 if you count the time change) and took a quick 14 hour nap.

So on my first real day in Bremen, I walked around the school a bit on my own and then had a proper tour just before starting my first lesson. The campus is much larger than Wabash’s, and has many gorgeous spots hidden around with great views where one could sit out and study, or just relax and enjoy the weather (unless it’s raining… which it does here frequently). The lessons are going fine, all in all not too difficult with the exception of the listening comprehension. I’m not too worried though because I’ve already noticed some improvement, and I believe that will only get better with time. My instructor’s English isn’t great and very little is spoken in English, save a few word here and there for clarification. Luckily I’m here to learn German, which she is (obviously) fluent in. 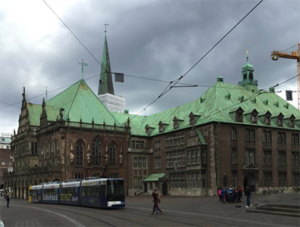 So far my best experience has been “exploring” the older part of the city. I use quotations here because most people would probably say that I was lost. To elaborate I had gotten rough directions from my roommate to the Tram Büro so that I could get a ticket to ride the trams for the rest of the month free. Seemed simple enough, so I headed on my way and wouldn’t realize that I had left my map behind until I was in the middle of the old part of the city without a clue where the Büro might be. Since I had a few hours before my lesson started that day, I figured I might as well have a look around and ended up touring a large portion of the city by myself, while occasionally asking a passerby in broken German about certain areas. I’m not sure why, but being lost in an entirely foreign city while a bit frightening, was extremely exciting, and it was so satisfying when I was able to ask someone for directions, and then manage to understand said directions well enough to get me back to the university.

I am thoroughly enjoying my time here in Bremen, and it has already become clear to me that one month isn’t very long, as this past week and a half has flown by. But I plan on doing a bit of traveling this weekend to fully take advantage of my time abroad, and will hopefully have plenty more stories to share with you in the near future.