Jack Montgomery ’15 – What sticks out most to me about this specific conversation with my host mothers dear friend, was for one thing the message. Rather beyond that, the fact that the instance symbolized the moment in itself. Siesta is a concept that is entirely foreign to us in the United States where we are hinged to the fast paced consumer society. Naps and afternoon beers with friends are not productive or acceptable. To see an entire city shut down in the afternoon to rest from the long nights or take in the company of others is a somewhat farfetched idea of what life should be like in the world I grew up in. Yet it is strongly intertwined into the Sevillean culture. If New York City is the city that never sleeps, than Seville, Spain is the city that never sleeps… but naps. Despite severe economic turmoil and massive unemployment the city remains vibrant and the people just as so. As Carmen told me, “La vida es corta,” life is short and the Sevilleans support such notions with gusto. To them, the economic crisis is a devastating reality, however as long as they have their families and friends they will get by. 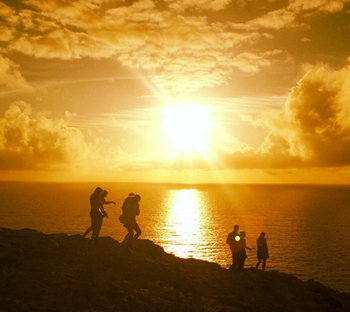 Prior to our conversion, my fellow homestay member Brad and I were walking back from our Spanish placement interviews. The interviews lasted five minutes covering the basics of our trip and our first 48 hours in Seville. Afterwards we walked back to our homestay taking a different route to try and find a replacement glass for the one I had dropped the day prior while trying to be heroic, carrying too many dishes into the kitchen from the dinner table.  Upon entering Triana the neighborhood we are living in, we were called over to one of the many tapas bar where our host mother and her friends were enjoying some afternoon Cruzcampos (Local beer) and gamabas (shrimp-like crustaceans).  Though we had just had our formal interview with our study abroad directors, the real interview was about to begin; as for the next hour and a half we would be grilled by the women on our Spanish. As the women treated us to a few Cruzcampos and plates of Gambas, we discussed life and Spanish-American cultural similarities and differences. It was in this moment that I felt as though I was truly being immersed into the Spanish culture.

Throughout the week, continued to see much of the beautiful city that is Seville.  We viewed grand monuments, attended a Flamenco show and experienced the energetic nightlife attending bars and a botellon. Botellons are a new fad for the Sevillean youth that currently faces an unemployment rate of over 50% for residents between the ages of 20-30. Where 20 and 30 year olds gather in parks and open areas to casually sip wine, beer, or rum to enjoy the company of others and socialize. Throughout my orientation activities and our nightly adventures it has been fascinating to see how many things in common my classmates and I have found with each other, as well as the locals we have met.

The week concluded with a trip to Lagos, Portugal for some fun in the sun and a trip to the Cabo de Sao Vincente for a magnificent sunset. The locals refer to the cape as the End of the World as it is the most southwestern point of Europe and is where the world was thought to have ended in the days the earth was believed to be flat. Slightly blocked by the clouds, the sunset was nonetheless breathtaking and offered a great moment of reflection for me. Looking out over the ocean towards the sun it was crazy to think despite so much travel and cultural stimuli over the last week I was still witnessing the same sun.  It stood as a great reminder of how lucky I am to have this experience and see the things I have been able to see over the last week. All I can say is that if that is just first week, it’s gonna be one hell of trip.