Ronnie Posthauer ’15 – Thanks to the generosity from the Rudolph family, I am able to take part in a four week intensive language program at a Goethe Institut located in southern Germany. However, before I began my course in the south of Germany, I was able to spend four days in Frankfurt, where I was able to reconnect with a friend I had met over a year ago.

I’m thankful that my friend was generous enough to provide for me a place to sleep, tips as to where I could shop to get the most value for my euro, and valuable language practice before I was to take on Germany alone. During those four days I grew confident in my ability to order food, travel on trains, and finally understand German as well as correctly produce it under stressful situations. For example, when it was my turn at the front of a line full of anxious people, I listened to a fast-talking salesman tell me all of the perks of various cellphone plans before paying for the best option. This might sound easy to most people, but I’ve never done some of this in the States, let alone while speaking German. 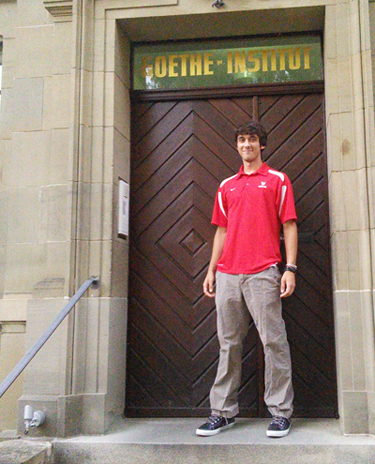 I’m very glad I had this chance to practice too, because less than an hour into my trip to Schwaebisch-Hall and saying goodbye to my friend, I had already run into trouble. My first train, known for being the fastest train in Germany, ran 15 minutes late and caused me to miss my first connection. I frantically approached the first railway official I saw, explained my situation to him and showed him my ticket. Without giving me much information, he pointed to another train and told me I better hurry before it left in thirty seconds. I didn’t really have much choice, so I hurried over and boarded the train just before the doors closed and it departed. I then looked at my ticket and the final destination of the train I was riding; its destination wasn’t anywhere on my ticket, and the times didn’t match up at all. I started to panic. I couldn’t contact anyone for help because my cellphone was still not activated, and WiFi was not an option. After a few minutes of thinking it was the end of the world, I got over myself and approached another passenger for help. Luckily the fellow was kind and had a cellphone which he used to look up a new set of connections for me. I thanked him and wrote these down. However, with my luck this train also ran slightly late and I missed the next train. Again I was on the verge of hyperventilating, but I calmed down and found the list of trains incoming and outgoing trains for the month and boarded the next train headed for Heilbronn, which is where one of my connections was located. In Heilbronn, I realized that I was not going to make it to my Schwaebisch-Hall in time to check into my hotel. At this point I finally broke down and paid for a wireless hotspot. I sent an e-mail to the hotel with the details of situation with the trains and hoped that I would still be able to check in. I was worried that the doors would be locked and that I would have to spend the night outside like I have heard of students doing in the past (no worries, everything worked out that night). Finally, I made it to Schwaebisch-Hall, but that wasn’t the end of my troubles! I was supposed to take the number one bus to the hotel; however, my ticket didn’t tell me there would be two number one buses facing in opposite directions… I boarded the only number one bus that was at the train station. After taking my seat, I saw a second number one bus pull up and had just enough time to think, “hmm.. I wonder if that’s the one I need to take,” before my bus took off. I had the pleasure of riding this bus to the end of its route, which by the way did not include my destination. I then had the wonderful experience of convincing the “gentleman” not to force me off the bus in the middle of nowhere. He explained to me that it would take another 45 minutes before we would circle back around to the train station where he would then begin the second part of his route in the direction that the other number one bus was facing. During this conversation he impatiently used a sentence structure containing three different verbs which I found very interesting. “Du haettest den anderen Bus einsteigen sollen” (You should have boarded the other bus). After turning my expected three hour trip into an epic nine hour journey (3–>9!) I finally reached my hotel, checked in, and crashed.

Reflecting on this situation, I am thrilled that I was able to overcome adversity and my own failures and in the end make it to my destination. Although I am completely responsible for some of my misfortune, I was able to utilize what I learned in the classrooms at Wabash College to dig myself out of one stressful situation after the next in real world experience. I’m not even (that) bitter about my lengthened travels because for one, everything worked out in the end, and second of all I used my language skills to correct my mistakes. That is a very good feeling to have.

There is more to come in the next few weeks here at Schwaebisch-Hall (hopefully just positive), as the people of the Goethe Institut have organized several activities. You can also look forward to more pictures.