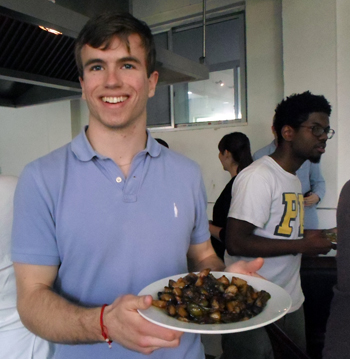 Ben Cook ’14 – Few people in Xi’an, China speak much English.  I found that even though Chinese students study English throughout school, their English studies focus more on reading and writing English than on speaking English.  With the exception of a few students who speak great English, most of the time my spoken Chinese is better than that person’s spoken English.  If I speak with an adult, then I’ll definitely need to use Chinese to communicate.  The combination of taking Chinese class for three hours a day, practicing with Chinese people all the time, and needing to use Chinese throughout my daily life has improved my Chinese language ability exponentially.  I appreciate the English levels of Chinese students at Wabash, because they are the exception rather than the norm.

I feel confident that I can survive on my own somewhere like Xi’an.  I even make my own money.  I heard from a friend about a part time English teaching opportunity.  After I interviewed, they asked if I could teach accounting.  I took two accounting classes at Wabash, and now I’m teaching accounting part-time to three Chinese students who are older than me and speak mediocre English.  Every week I prepare a three-hour accounting lesson.  Next week I’ll host a TV show episode about Shaanxi Opera.  I also do some free-lance English tutoring.  Through tutoring, I met a Chinese girl from Xi’an.  I learn many new Chinese words and cool local places through her.  I also met many Chinese friends through my Chinese roommate, basketball, and through random conversations.  Basketball is huge in China, and many Chinese guys know Indiana because of the Indiana Pacers.

I enjoy the exchange rate between America and China.  One dollar buys around 6.5 Chinese RMBs.  Things in China tend to be inexpensive.  I can get a good meal from around $0.5 to $6 US dollars.  On top of that, I can negotiate sometimes!  It is fun.  Chinese merchants tend to start at a higher price because I don’t look Chinese.  So I usually reply with a lower price, sometimes 10 percent of the asking price.  Then after some back and forth, I walk away.  Many Chinese stores sell similar things, so I can play stores against each other, and end up with a price around 30 percent of the asking price sometimes.

I’ve seen many cool sites in China so far.  I spent a week in Beijing, where I saw the 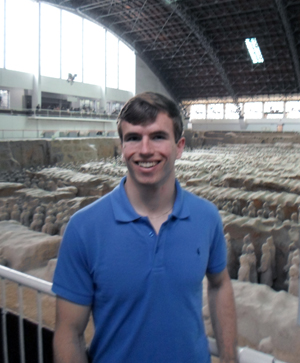 Forbidden City, many great restaurants, an acrobat performance, and Chinese new year celebrations.  In Xi’an I saw the Terra Cotta Warriors, rode a bike on the city wall, hiked in the mountains south of the city, learned some painting technique at a folk-painter’s studio, and learned to cook some dishes at the best cooking school in Xi’an.  I’m especially happy that I learned to make Chinese eggplant, which is phenomenal.  I also enjoy fatty meats in China, especially duck, and the famous noodle dishes in Xi’an.

I’m excited about the upcoming travel I’ll do.  My program takes a two-week trip along the ancient Silk Road that will take me west to a less-touristy part of the Great Wall, the desert, and some oasis towns.  I’ll get to ride a camel.  I also plan on traveling to Chengdu, Shanghai, and several other places.  I’m especially excited to meet with some Wabash alumni working in China.