Edward Evans ’13 – The train stops in Montpellier.  The lost foreigner leaves the station with incorrect MapQuest directions in hand.  With no confidence in his French comprehension, he walks up and down the same streets without asking anyone for directions. After three hours of bewilderment, he hobbles to the right hotel. This is where I began, constantly lost, confused, and incapable of talking to people. 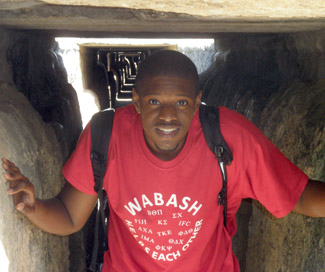 Ed exiting the Pont do Gard.

For the first couple of weeks, the Minnesota program arranged an intensive grammar course to help students find a French groove and to determine our level of the language. My grammar was decent; however, it was apparent that my speaking and comprehension were well-below average. The advisors suggested that I follow an easier Language Studies track as opposed to the Integrated Studies one. (Honestly, I don’t blame them; I was struggling and among the least-experienced in the program.) Wanting to get an authentic French experience and being a little stubborn, I threw myself to the wolves, registering for courses in which I would be among French students.

In the beginning, I had major doubts. The French lectures were killing me. My notes entailed random, unrelated words that I managed to recognize. Later, I would go to the library and try to draw some relation between them. This was extremely inefficient and tiring. My brain felt like a whooping cushion. Each week, however, I have noticed that my notes are more cohesive. Now, I can actually ask questions regarding the subject matter after class. Most importantly, I am no longer eyeing my teachers with this bizarre mixture of confusion and malice. I attribute this lingual enhancement to multiple reasons, one of which is my host family. My host mom is from French Guiana, and she used to be a teacher. She has been EXTREMELY patient when talking to me and has been great in providing tips to improve my French and to speak properly. My host brother, who averages 100 words a second, keeps me balanced with his slang. I don’t think I would be scholastically successful here without them. Host family: Highly recommended.

Aside from school (which I could go on forever about), I have truly immersed myself into the culture. I have noticed great differences between France and the US. The school system, politics, and even the mentalities towards everyday living are just different, not necessarily better or worse. Furthermore, I have a greater appreciation for history. I’ll be the first to admit that I’m a chemistry and math nerd. I love it. However, I also realize how easy it is to be consumed by the sciences. When you walk along the ramparts of Carcassonne or across the Pont du Gard, an aqueduct built twenty centuries ago, you have no other choice but to appreciate the incredible ingenuity of the Romans. It’s unbelievable.

An evolution has occurred. Come mid-December, a Frenchman will return to his native country. He will go to the very same train station around which he was completely lost less than four months ago. He will high-five security and will hold a conversation with a woman about the upcoming presidential election and her dislike for Nicholas Sarkozy. He will return to the US with new perspectives, new insight, and a new appreciation for what he is going back to. With a little more than a month left, I already deem this study abroad experience a complete success. Thank you, Wabash.