Andrew Kunze ’12 – This past weekend in Jaipur was easily the best yet; it was Holi, the Hindu festival of colors. Holi celebrates the victory of good over evil in a Hindu story about an evil king, Hiranyakasipu. He became very powerful and wanted everyone to worship him as a god. Everyone obliged except for Hiranyakasipu’s son, Prehelad. So Hiranyakasipu asked his sister to kill Prehelad; her name was Holika (hence Holi). She had a special blessing that no fire could burn her. She took Prehelad in her lap an sat in a fire. The great god Vishnu was watching all of this from heaven and was displeased, so he switched the blessing. Thus Holi burned, Prehelad survived, and good triumphed. 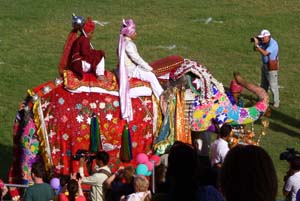 Hindus (and Indians of all religions) celebrate this victory over a two-day festival, the first night of which always comes on the full moon. On the first day people “burn Holi.” Neighborhoods come together and build huge piles of wood and kindling, with one larger log in the middle (this log represents Prehelad). They decorate the piles with color-powder, kites, and puja strings (red and yellow thread). At exactly 6:47 pm everyone gathers around as they light the fire. Just before it is consumed, someone pulls the big log, representing Prehelad out of the fire. Thus Prehelad is saved, and Holika is burned.

Also on the first day of Holi, Jaipur hosts an elephant beauty contest. All of the local elephant-trainers paint their massive pets from trunk to toe, resulting in some of the most colorful two-ton beasts you’ve ever seen. 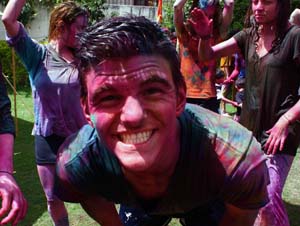 On the second day people “play Holi.” To play Holi, you cover your friends and family in colored-powder and spray them with colored-water. Playing Holi in this way may not be directly related to the story of Holika and Prehelad, but Hindus will say that they play it just as Lord Krishna used to play with the Gopis (Krishna’s female followers).

When you wake up the morning of Holi, it feels like Christmas, only better. Everyone wants to be the first to color their friends. My friends and I first played with the kids in our neighborhood (sometimes using mud when we ran out of color). Then, one of the many free-roaming marching-bands stopped by our hotel and played for a while. We played with our teaching staff and amongst ourselves for the rest of the morning.

For the first hour, or so, of playing Holi, everyone becomes increasingly bright. Your face, hair, and entire body become a highlighter patchwork of pink, blue, yellow, and green. Then, once people start playing with the water guns and balloons, it all starts to run together. All the different colored powders merge together into darker purples and browns. Looking fairly gross, we slept off the afternoon. It was a very happy Holi.