Thach “Ben” Huynh ’20 spent his summer conducting research with Dr. Neil Schmitzer-Torbert, looking at differences between smokers and non-smokers in a new decision-making task. For this work, Ben held the Parks Internship, generously supported by the family of Wabash Psychology professor Dr. Eldon Parks in his memory: 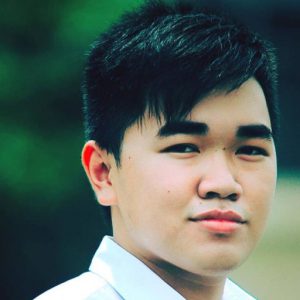 Last summer I had the opportunity to complete an internship under the supervision of Dr. Neil Schmitzer-Torbert. Our research project focused on the design and validation of a novel computer task that studies naturalistic decision-making in humans. We refer to this program as the “Movie Row Task” (as it is based on a task originally developed for rats and mice called the Restaurant Row). Overall the internship was an invaluable learning experience that allowed me to acquire new skills (e.g., MATLAB) and gain hands-on exposure to research.

We took much of our inspiration for the summer project from research by Dr. David Redish and colleagues (Steiner & Redish, 2014 and Abram et al., 2016). In the former research article, the authors used a relatively new task to study regret and its representation in the brain in rats. The task, the “Restaurant Row Task” (RRT), was a square maze with four spokes of food dispensers at each corner of the square that represented four different food pellet flavors. Rats would travel among these spokes and wait some time to eat the food pellets whose flavor they liked. The rats had the choice to either wait for the food pellets or skip them for other offers. Redish and colleagues characterized “regret-inducing” instances as cases where rats skipped a good offer (i.e., offers of preferred food flavors with low delay time) only to encounter a bad offer (i.e., offers of less preferred food flavors with high delay time.) The authors found that, in regret conditions, rats showed increasing deliberation (i.e., vicarious trial and error) before entering the bad offer zone, higher probability of accepting the bad food offers, and shorter reward consumption time. Along with behavioral results, Redish and colleagues also presented some neural correlates of regret in rats.

Abram and colleagues (2016) designed a version of the RRT, called the “Web-Surf Task” (WST), to test if results from rats tested in the RRT would “translate” to humans, and provide valuable clinical insights. In this task, participants would “surf” among galleries of four types of videos (cat, bike fail, landscape, and dance videos) via clicking on-screen buttons. The idea behind the design of the WST was that human online information-foraging was similar to animal food-foraging. The types of video stimuli were selected based on their different brain area representation which would support brain imaging studies. Abram et al., (2016) showed that the WST was consistent with the RRT and showed high reliability. However, since the participants in the WST did not travel among options physically, the researchers were unable to observe physical behavior (e.g., travel trajectories, etc.) that may be relevant to decision-making (e.g., vicarious trial and error). Indeed, the lack of physical travel was the most glaring inconsistency between the WST and the RRT.

As such, Dr. Schmitzer-Tobert attempted to design another version of the RRT that would combine the physicality of the RRT and the human compatibility of the WST. This version, the “Movie Row Task” (MRT), allowed participants to travel and watch the galleries of videos (used in Abram et al., 2016) in a 3D environment using the arrow keys. My Behavioral Neuroscience class tested the first design of the MRT using samples from Wabash College in the spring of 2018. We found out that the first version suffered from some instruction flaws that prevented participants from showing clear patterns of preference for the stimuli. In many cases participants either did not show any preference for any video type or showed very high delay for all video types. Thus, for my summer internship, Dr. Schmitzer-Torbert designed a second variation of the MRT that fixed the instruction flaws from the original design. We recruited online workers from the Amazon Mechanical Turk to validate this version of the MRT. In addition to healthy participants, we also targeted nicotine-dependent (i.e., smokers) individuals to investigate the effect of nicotine addiction on decision-making on the MRT.

Our second design fared better than the first one in inducing clear displays of preference among the different stimuli types. We were able to replicate some interesting decision-making phenomena from studies that utilized the RRT for rodent samples such as deliberation (Steiner and Redish, 2014), sunk cost (Sweis et al., 2018), and regret (Steiner and Redish, 2014). Particularly, we succeeded in characterizing regret behaviors in human participants on the MRT. Unlike rats (whose behaviors I highlighted above), human subjects tended to skip bad offers in an efficient manner in regret-inducing instances. For “sunk-cost,” we found that when participants had waited for an offer, they would be less likely to quit the offer; more so with increasing wait time. Finally, some deliberation metrics such as total duration and rotation on the task were sensitive to the delay thresholds of each participant. For analyses involving nicotine addiction, however, we were unable to find significant differences between the performances of smokers versus non-smokers on this version of the task. That said we are excited to further this line of research in future studies.

Because this project was “computational” in nature, Dr. Schmitzer-Torbert taught me how to use MATLAB to analyze and visualize data. Learning MATLAB for me was difficult (given my lack of experience in programming) but rewarding. I still recall the satisfaction I felt when I was able to produce my first complete graph in MATLAB. Dr. Schmitzer-Torbert also allowed me to conduct literature review independently, which helped me to hone my research skills significantly. I hope that these skills would benefit me in my future academic career.

As a concluding note, I would like to thank Dr. Schmitzer-Torbert and the Department of Psychology at Wabash College for a wonderful summer experience. I would also like to express gratitude to alumni and donors who made such an experience possible.