This summer I worked on several different research projects with Dr. Horton. We focused our efforts on projects relating to narcissism and parenting. 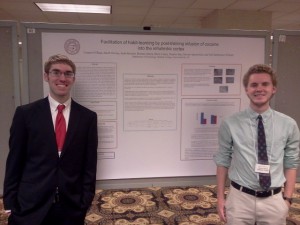 O’Rear (left) with Jacob Owens presenting on another summer research project at the 2013 Midwestern Psychological Association Meeting in Chicago.

The main focus of my summer internship was to collect data for a temporal analysis of child reports of parenting behavior. A temporal analysis allowed us to see how reports of parenting behavior have changed over time. The idea being that changes in parental behavior (like parents becoming less strict with their children over time) may be linked to the rise in narcissism over the past several decades. Unfortunately, the measure that we were investigating was not used in as uniform a way as we had hoped, so despite the collection of nearly one hundred research articles we were not able to get a clear picture of the changes in parenting behavior. This project did provide me with good insight into how research articles should be written, and what data to include for researchers interested in performing meta-analyses later on. It also introduced me to the methodology behind meta-analyses and gave me the opportunity to run new, more advanced statistical analyses.

In addition to the temporal analysis, I worked on a few side projects this summer. One of these projects was a continuation of research I had done with Dr. Horton during the semester. I investigated the physiological responses of narcissists when they are confronted by an achievement threat (they are given either purposefully easy or hard word scrambles and told how they should perform). This project allowed us to investigate the difference between the two types of narcissism, vulnerable and grandiose.

I also helped Dr. Horton set up an account for Amazon’s M-Turk system. This system allows researchers to post questionnaires for “turkers” (workers in the M-Turk system) to fill out in exchange for Amazon credit. M-Turk is relatively new and its possibilities for future research make it an exciting research tool for the future.

Overall, the summer provided me with valuable and much needed experience. The ability to design novel research projects and analyze past research is something that graduate schools demand from their students, and my experience this summer provided me with the opportunity to do just that. The research that Dr. Horton and I carried out this summer gave me the opportunity to sharpen my research skills and be ahead of my peers when it comes time to apply to graduate schools. Dr. Horton took a hands-off approach, allowing me to work mostly independent, while at the same time being readily available to guide me when I had questions. This approach allowed me to hone my research skills and work in a capacity similar to what will be expected of me in graduate school and for that I am thankful to both Dr. Horton and the entire psychology department.