Seniors Alexiz Arellano ’18 and Kirby Cox ’18 worked this summer with Prof. Olofson, and Alexiz submitted the post below, about their research on attachment: 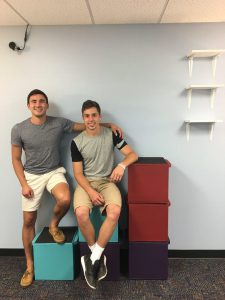 This summer fellow classmate Kirby Cox and I had the amazing opportunity to work under Dr. Olofson and the Psychology Department of Wabash College. Our research focused on developing a scale that would properly measure the parent–child attachment relationship. It is well established that attachment security is a relationship or secure base that may develop between the primary caregiver and the child overtime, research mostly throughout the strange situation procedure has identified three attachment categories. These are secure, insecure – resistant, and insecure – avoidant attachment (Ainsworth 1973). Secure attachment can be identified as a healthy, high–quality relationship in which children use their parents as secure base for exploration. An insecure–resistant is a relationship in which children have less positive attachment to their caregiver than secure children, one may observe children being clingy or seeking comfort and once distressed they are not easily comforted. Insecure–avoidant children may appear somewhat indifferent towards their caregiver and very independent since they do not tend to physically illustrate distress. However, when looking at physiological tests insecure–avoidant children tend to illustrate higher levels of distress than any other children. Furthermore, when analyzing attachment relationships it is important to note that predictors of attachment differ between mothers and fathers. Recent research has also presented how classic measures of attachment security may not be capturing fathers parenting variability perhaps due to difference in predictors. Therefore, our research specifically focused in developing a proper set of scales that would properly measure both mothers and fathers parenting variability.

Thereafter, Dr. Olofson gave us the NICHD, which is the gold-standard set of measures for assessing attachment security. Kirby and I watched and coded multiple videos using the NICHD scale until we reached good inner rater reliability and essentially felt comfortable with the process of coding. In these videos the parent and child went throughout a structured scenario in which the parent had to help their child find the correct key to open a transparent box where the children’s desired toy was stored. The coding process was very tedious, as we would choose a scale then watch every video a total of four times before coding for each specific dimensions within the scale such as intrusiveness or sensitivity. Kirby and I would code multiple videos each day and reconvene the following morning long with Dr. Olofson to discuss our experience coding. After practically mastering the NICHD scale, our research group had the opportunity to collaborate with Dr. Sarah Schoppe–Sullivan from the Ohio State University’s developmental program. On our visit we focused in communicating about previous scales that we had worked with, pin pointing their pros and cons along with any particular details that would aid our development of a new scale. With the permission of fellow researchers, Dr. Olofson and Dr. Schoppe–Sullivan developed the Wabash-OSU Scales of Challenge & Overprotectiveness. CPB refers to the extent to which the parent encourages the child to go outside of their comfort-zone and push the limits of their current ability; our research group analyzed both physical and expressive CPB. While overprotection refers to the extent to which the parent conveys over – exaggerated worry or concern for the child’s wellbeing and safety. Similarly to CPB, researchers coded for physical and expressive overprotection. Kirby and I had the chance to observe and code new set of videos utilizing the Wabash-OSU scales, this was extremely interesting since we were finally able to code parent-child interactions utilizing a set of measurements that we helped develop.

The last part of the summer internship consisted of waiting to get approved for the IRB through the Ohio State University Psychology department. However, Dr. Olofson did not just give us the rest of the summer off, instead he encouraged us to continue reading about relatable developmental topics such as temperament, emotion regulation, etc. Next Dr. Olofson challenged Kirby and I to modify the transparent box task so we can eventually code the task utilizing the Wabash-OSU scales. This may have been the most difficult part of the internship since modifying the task not only forced us to think creatively but also to work under unfamiliar areas such as woodwork. Kirby and I had to build 16×16 wooden boxes in which children would be climbing. This was all due to the modifications done to the transparent box task as we hoped to capture CPB and overprotectiveness. Furthermore, we also had to arrange camera angles and select the different type of cameras that would be used to record the new task. Throughout the whole process of modifying the transparent box task, Kirby and I continuously experienced something new from learning how to cut plywood to identifying recording errors. This was an extremely interesting experience and once again reminded me of the careful work that goes in psychology since every tiny detail made a difference when designing the new task.

Initially I did not know what to expect coming into a summer internship at Wabash College, especially since this was my first research-based internship. However, I knew that doing research was what I wanted to focus on this previous summer and from the first day on the job the overall experience was great. I immediately felt an intrinsic motivation to continue working and learning about our attachment research. I can confidently state that I learned a great range of skills throughout my summer internship at Wabash College. Since we learned essential research skills such as designing and managing a psychological experiment to learning how to cut and sand plywood. Furthermore, I believe these skills will help me throughout the rest of my academic and professional career as I plan to attend The University of Texas in El Paso for their clinical psychology master’s program. Clearly, the summer internship will look great in my resume but more importantly it gives me the confidence and experience for the following step in my career.

I would like to thank Dr. Olofson and the Psychology Department of Wabash College for this amazing experience. I would also like to thank the donors, without their generous contribution my and many fellow classmates research experiences’ may not have been possible. 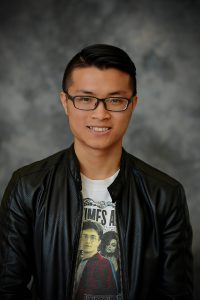 After completing a literature review on the emotion of envy for an independent study in the spring semester of 2017 at Wabash College, I was motivated to carry on my research project into the summer. Previous researchers have done intensive work on what factors, both intrinsic and extrinsic, lead to an envious state. There have also been findings with respect to behavioral and emotional consequences of envy. However, the field has not seen much work regarding how to attenuate the emotion and forestall the undesirable outcomes.

With great thanks to the Dill Grant, I was able to travel to Ann Arbor and spend roughly a month to carry out a the project. Working in the laboratory of Dr. Garcia at the University of Michigan, we mapped out the study design to test a potential alleviating effect of attribution on envy. We started with asking online participants (i.e., MTurkers) to imagine a friend who outperformed them in some domains then to write about (I) what advantages their friends had, or (II) what disadvantages they had that might leave them in an inferior position. This phase of the project was intended to serve as a pilot test for the envy (i.e., writing about a friend) and attribution (i.e., writing about one’s own disadvantaged or a friend’s disadvantages) manipulations. We ended with a significant result for the writing stimulus to induce an envious state. The writing paradigm for attribution, nevertheless, did not turn out efficacious.

We dedicated the second round of pilot tests to a disparate manipulation of attribution. We induced attributions by asking participants to indicate how much they agreed with two statements that attributed their low performance to either (a) their friends’ situational advantages (i.e., family’s financial support, better education, social connections), or (b) their friends’ dispositional advantages (i.e., hard work, boldness, self-confidence). Making situational attributions significantly predicted the level of envy in the subjects, nonetheless, in a reversed direction compared to our hypothesis; in other words, the more participants disagreed with the situational attributions, the less envious they felt of their friends.

In interpreting the results, we realized there could be a few alternative explanations for the observed relation. Either being allowed to write about whatever or asked to indicate agreement with prepared statements, that could be the reasons why their friends outperformed them, the participants could have been influenced by potential advantages that they had not thought of initially but now started pondering upon. In the same line of reasoning, the participants could have disagreed with the statements simply because the majority of what they were thinking about did not correspond to the domain(s) in which they were initially envious of their friends.

Even though my research internship at Michigan ended shortly after this third phase, I have continued to receive support, both professional and financial, from Dr. Garcia’s lab since then. The next step will be to utilize an in-lab design to keep participants focused on specific attributions and record their levels of envy via another measure.

Leaving Michigan, I arrived shortly in Eugene to commence my second research experience in Dr. Hodges’s Social Cognition lab. The project under analysis related itself to the mediation effect of similarity on the relation between stereotypes and empathic accuracy, i.e., how the extent to which the readers’ interpretations of the targets’ thoughts were similar to what the targets actually reported, affected the accuracy of using stereotypes in reading thoughts. I was trained and given plenty opportunities to work on coding skills in such studies.

In another part, I handled organizing data for multi-level model regressions. This analysis has recently risen as a powerful tool in counting for multiple error terms, aka. confounding variables, in perplexed relational models. For example, the effect of using stereotypes about middle easterners in conjecturing their thoughts was not a straight relation in which the prevalence of stereotypes predicted interpretation accuracy. Organizing raters’ ratings was essential to quantifying the hypotheses into a meaningful multi-level model.

In addition, I attended weekly sessions that focused on a review paper of empathic accuracy and shared reality. We went through several stages of pulling together a broad image of a psychological construct that has been under intensive research. Relevant work was scrutinized for useful findings; varied findings were then grouped properly to create revealing categories; novel ideas and appealing suggestions were tagged in accordingly. Intermittent discussions served to induce efficient brainstorming and allowed research assistants to contribute their own viewpoints on the subject.