Senior Niki Kazahaya ’18  and Junior Neil Dittmann ’19 spent part of their summer conducting research with Dr. Schmitzer-Torbert, and the research expenses for his project with humans was supported by donations from the 2017 Day of Giving: 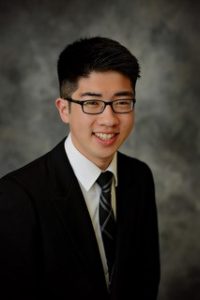 After completing an independent research project with Professor Schmitzer-Torbert during my freshman year, I was excited to intern again in his laboratory this summer. Working alongside fellow psychology major, Neil Dittmann ’19, we completed two projects that examined learning and memory in both a human and animal model. More specifically, we looked at the relationship between mindfulness, stress, and hippocampus-dependent navigation strategies in an online human sample. In the animal model, we examined spatial and stimulus-response strategies in rats navigating a maze.

While animals and humans can exhibit different forms of navigation, two techniques tend to be the most prevalent, stimulus-response and place strategies. In a stimulus-response, or simply response, strategy, animals learn to display a certain behavior as a reaction to a particular stimulus. Greater activity in the caudate nucleus of the brain has been found to be associated with acquisition of response strategies (Packard, Hirsh, & White, 1989; Packard & McGaugh, 1996). On the other hand, place strategy is when animals can learn the location of a particular object using spatial cues. Several studies have found that the hippocampus is a necessary component for the development of place learning (Chang & Gold, 2003; O’Keefe & Conway, 1980; Packard & McGaugh, 1996).

In the human study, our primary focus was to examine the relationship between mindfulness and hippocampus-dependent, or place, strategies. Mindfulness is described as one’s ability to be conscious of his/her surroundings without being overly reactive or judgmental of the present moment. Because mindfulness and volume of the hippocampus tend to be positively related (Lu, Song, Xu, Wang, Li, & Liu, 2014), we predicted that participants with greater mindfulness were more likely to use a place strategy when navigating a virtual environment. Previous research has also found that mindfulness and stress tend to be negatively correlated. As a result, mindfulness-based stress reduction (MBSR) techniques have gained considerable attention as an effective method to combat stress and anxiety. A second objective of our research was to determine if an MBSR intervention in a high-stress sample of adults could lead to the adoption of more place strategies.

To test our hypotheses, we recruited young and middle-aged participants through Amazon Mechanical Turk to complete a virtual eight-arm radial-maze, which can be solved using either response or spatial strategies. After the virtual maze task, participants filled out a survey about how they navigated through the environment. Neil and I were responsible for reading these surveys and determining if participants were relying on a spatial or response strategy, and then testing if adults reporting high-stress and low-mindfulness were less likely to use a spatial strategy.

During the other half of the internship, Neil and I continued on a research project from our PSY-233 Behavioral Neuroscience class. A previous study by Packard and McGaugh (1996) examined spatial and place strategies by training rats to obtain a food reward in a plus-shaped maze. With one arm closed off to form a T-shaped maze, rats were trained to find food placed in one arm of the T. During the training phase, the rat began and retrieved food from the same locations. On a probe trial, rats were placed in arm opposite to the starting location. If the rat could accurately locate the reward, it was demonstrating a place strategy. Conversely, if the rat turned in the same direction as it did in the training phase, it was navigating via a response strategy.

However, the experimental paradigm used in Packard and McGaugh (1996) may be limited. When conducting a probe trial in a plus-shaped maze, it is difficult to confirm that animals are relying specifically on either a place or response strategy, as any choice made by the animal, even a random search, counts as a strategy. When approaching the food reward, rats were only able to turn in two directions. As a result, the rats have no other choice than to exhibit either a response or place strategy.

To address this issue, we conducted a study similar to that of Packard and McGaugh (1996). However, we introduced a new form of the maze design that included other areas where the rat could travel during a probe trial, using a symmetrical maze with four starting locations and four goal locations. Most of our work this summer involved testing normal rats and two rats with hippocampal damage on this new maze, and Neil and I were responsible for training the rats, recording the training sessions, and tracking their paths on a Matlab program designed by Professor Schmitzer-Torbert.

This summer has been an incredibly rewarding and formative experience. I especially enjoyed the breadth and range of topics we covered. While our internship was divided into two main projects, we touched on many other areas, such as computer game design, ethical treatment of animals, coding in Matlab, and reading/writing scientific literature. However, the best aspect of our internship was the ability to work extremely closely with an expert like Professor Schmitzer-Torbert. While Neil and I have had previous classes with Professor Schmitzer-Torbert, the internship allowed for much closer collaboration and mentorship with our professor.

I would like to thank the Wabash College Psychology Department, Professor Schmitzer-Torbert, and Neil Dittmann ’19. I am also extremely grateful to all the donors from the Wabash College Day of Giving on April 19th. Because of your contributions, Professor Schmitzer-Torbert, Neil, and I will be able to present our research Society for Neuroscience Annual Meeting and continue our work in the fall semester.