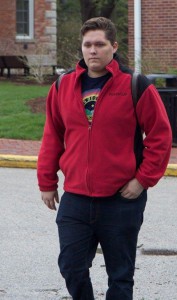 When I received the email from Professor Schmitzer-Torbert offering me the change to work with Professor Rush over the summer as a research intern I was excited to say the least. We all have ideas of the experiences Wabash will offer us during our four years thought up before we even set foot on campus on Freshman Saturday, and one such experiences I knew I wanted to be a part of early on was aiding a Professor in their field of research. This is because a lot can be learnt through an opportunity like this, both personally and for the whole of psychology research. In that, psychology research allows us to better understand the human mind, and while we are advised against using the word, “prove” research like this gives us an empirical way of examining something as hard to quantify as the human mind. And this summer I was able to be a part of such an important process. I can not express how grateful I am to the Wabash Psychology Department and Wabash College for funding the internship.

Dr. Rush, Zack, and I set out at the beginning of the summer to study the effectiveness of eye witness identification through the use of police lineups. We were interested in a number of aspects of this widely used practice, but above all we were interested in possibly replicating past findings that shed light on the practice known as the Appearance Change Instruction. ACI for short. The ACI is the practice of telling a witness that the appearance of the perpetrator they have been asked to identify may have changed sense the time the witness had seen them. This was designed to have participants understand that the perp may have different hair color or cut now, or is clean shaven in the picture but had a thick beard while committing the crime. This practice sounds like it would aid participants in their attempts to make a decision, and even sounds a little self-explanatory or commonsensical. However, a 2006 study by Charman and Wells found that, while the ACI significantly increased the number of identifications participants made, it did not increase the amount of correct identifications of the suspect. Meaning that the ACI may have an adverse effect on witnesses’ criteria for identifying a suspect or they change their criteria for what would be a good identification. This is called mental mutation. However, before anything else can be said replications need to be done, following Charman and Wells methodology to see if their findings can replicate on a totally different sample of participants.  This was the aim of our study. 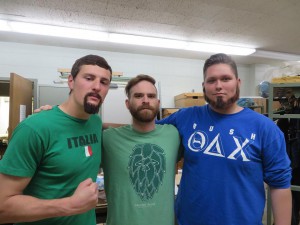 Testing out the artificial beards with Dr. Rush.

The first day of our research project was spent having Wabash’s Fine Arts Department place movie quality artificial beards on to both Zack and I’s faces. Before and after which Dr. Rush took mug shot style pictures of both Zack and I without a beard and with a beard. The next week or so was spend sifting through the Florida State Department of Corrections mug shot database finding people that met Zack and I’s general description for both the facial hair and no facial hair conditions. We then used Adobe Photoshop to give all the mugshots the same background and the same color t shirt (to eliminate any possible issues caused by dissimilarity). This left us with a sizable number of possible lineup foils. Next we had those in the Wabash Community who were also staying in Crawfordsville over the summer conduct similarity ratings for both Zack and I’s beard and no beard condition. These similarity ratings left us with the six most similar mug shots to our own mug shots (five foils, and one innocent suspect for our target absent conditions). These were photos made it into our final lineup for the study.

Next, Zack and I set out to collect data. We spent most of our days and the Purdue Student Union which was an almost constant source of new participants who had very little chance of knowing either of us before we asked them to partake in our study. With that being said we also frequented the Circle Center Mall in Indianapolis and Butler University’s campus, we even tried to collect data in locations around Crawfordsville with mixed results. The process of data collection went like so. First, either Zack or I (whomever was the designated target for the specific replication) would approach a group of potential participants and ask them for some basic directions. The most common question we asked at the Purdue Student Union was, “do you guy know where the UPS store is?” we then got our response and leave the target after this short interaction (we aimed for around a fifteen second interaction for most groups). After 5-8 minutes had passed the other researcher would approach the targets and ask if they remembered if a guy had come up and asked them for directions. If they said yes the researcher would give them the spiel about the project and ask if the target(s) wanted to participate. Again, if they said yes we would administer the experiment after the participant had signed a standard informed consent waver. The lineup task was given on a set of Surface Pro tablets and each participants was given a coded PowerPoint. There were sixteen PowerPoints for each replication meaning we needed sixteen participants for Zack’s replication before we could start mine and vice versa. We completed enough replications to get to 256 participants total.

Psychology research is reliant on people being willing to participate in the researchers study. This can become a difficult task. In past psychology classes we have read research articles and during the statistics sequence we conduct replication projects in groups that closely resembled conducting actual psychology research, but this summer’s research project truly showed me the amount of man hours that go into conducting experiments like the one Zack and I were a part of. For the first few weeks of data collection we never broke ten participants in a day and dealt with many more noes than yeses. This highlighted a common difficulty in the field of psychological research that is conducted on human participants. First of all, interest in one’s study may not be as high as one would like, resulting in a lack of participants, leading to more time in the field building up numbers. Second, there are some people that you just won’t get. Either they are on an important call, taking an online quiz, or just got up a left a minute after the initial interaction with the target. These weren’t people that said no but they were potential participants that we could no longer get. Regardless, we were asking people to give us their time and people are pretty protective of their time and if they don’t want to participate because of that so be it and if they left or were busy there wasn’t much we could do but move on to the next potential participant. Sometimes, we (mostly me) got hung up on all the noes and got frustrated with the people that didn’t want to participate, but that was the biggest educator of this study. All the noes pushed up to keep going and showed us that research can’t be completed in a day. It took us some learning but we eventually got to the point of getting more and more yeses than noes. We kept getting better and stopped letting the noes get to our heads up until we were completing a replication and a half some days.

In closing I would like to again thank the Wabash College psychology department and the Park family for giving the chance to take a summer and get my first real taste of being a research psychologist. My parents asked me to also add in their profound thanks for giving me this opportunity as well. I learnt a lot and had a blast doing it. Working with Dr, Rush and Zack was a pleasure, I can hardly wait to see what our data says about the research project and I look forward with helping Zack with the extension of this study for his senior Capstone project!