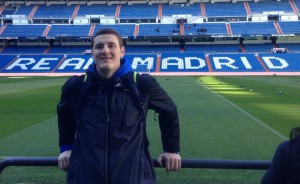 This summer I was a Social Psychology Research Assistant for our Psychology department. I worked under the guidance of Professor Ryan Rush. I actually had the privilege of helping run this experiment two summers in a row. Dr. Rush’s research is on eyewitness identification and specifically on what is called the Appearance Change Instruction. This instruction essentially says that the culprit of a crime may or may not have changed their identity since the crime has occurred. The idea is that this instruction is supposed to forewarn the eyewitness of a crime that the culprit may not appear in a lineup exactly as the eyewitness remembers. Our research was to see if the instruction promotes correct choice or wrong choice for the eyewitness.

In order to run this experiment, my research partner, Mason Hooper, and I went to public places and found participants that we did not personally know. My research partner would go up to a person and would ask them an arbitrary question such as “do you happen to know where the nearest library is?” Five minutes later I would go up and introduce myself, explain that the person who was asking for directions was apart of a research experiment, and ask if they would be interested in identifying that person in a lineup of six photos. We used a tablet where we had sixteen different PowerPoint each consisting of 6 photos each. Each of the PowerPoints exhibited a different condition that we were testing. The conditions were as followed: we were present or not present in the lineup, had a beard or did not have a beard, and there was an “unsure” choice on top of “1-6 or not present” choices. The participants had to identify if we were present or not in the lineups, then what number we were if we were present. If they had the “unsure” condition, they could have chosen “unsure.” We also asked how confident they were in their choice (1 through 7, 1 being not at all confident and 7 being extremely confident) and general demographic information such as gender, age, and ethnicity.

Running an experiment like this has been one of the most beneficial learning experiences in my academic career for several reasons, especially as a psychology major and someone who may be going into a field in psychology. First, it is hard to understand the whole process of experimentation until you actually run an experiment. We facilitated in the set-up, data collection, and briefly with a write-up of our experiment. I have a better understanding of the time and detail that goes into setting up and completing an IRB-approved study. Suffice to say, it takes time, attention to detail, and the ability to learn and grow from mistakes. Second, I gained interpersonal skills from interacting with people who I had never met before. In order to run the experiment, our participants essentially had to be strangers. If I had any doubt or fear of first-time interactions before this study, that has now vanished. I learned better ways to greet and salute people, how to better respect ones privacy, and how to effectively hold a conversation. Many experiments do not require such intense collector-participant interactions, so this experience truly helped me become a better speaker. Finally, I learned the importance of teamwork and listening to what your research partner has to say. Cliché, yes; overlooked, yes. When people talk about the importance of teamwork, they should highlight that if you don’t learn and grow from your peers, you will fail at your task. This is truly the case in an experiment like ours and I absolutely understand this concept now. Mason and I were constantly giving each other advice, talking about what was working and not working, and utilizing each other’s strengths to reach our end goal.

I cannot say thank you enough to Dr. Rush, the Wabash College Psychology Department, and to our experiment funders for this experience. It is something that has helped me socially and academically. As I look to the future, graduate school is in the horizon. I feel as if this summer research has offered me experience that can only help me in my search and career as a graduate student.