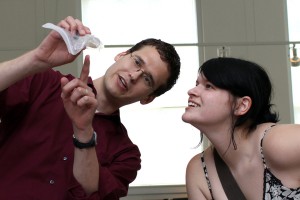 Prof. Schmitzer-Torbert at Brain Day in 2010.

Last week. Dr. Neil Schmitzer-Torbert was named the Daniel F. Evans Associate Professor in the Social Sciences. Daniel F. Evans ’43 was a longtime Trustee and Treasurer, and served as the College CEO in 1992-3.

The Evans chair was established by the Board of Trustees in 1994, and is awarded to a Wabash faculty member every three years. The award “recognizes an individual whose teaching and scholarship are admirable and effective, and whose intellectual leadership promises to affect the quality of instruction in his or her discipline and across the College.”  Previous Psychology faculty who have held the Evans chair are Profs. Robert Horton (2008-11) and Charles Blaich (1999-2002).

Prof. Schmitzer-Torbert received his bachelor’s degree from Knox College in 2000, and completed his Ph.D. in Neuroscience from the University of Minnesota in 2005. He joined the Wabash faculty in 2006, and received tenure in 2011. He teaches in the department’s Introduction to Psychology and Research Methods & Statistics courses, as well as the department’s offerings in neuroscience (Introduction to Neuroscience, Behavioral Neuroscience).  This fall, he will be travelling to Montreal with his Behavioral Neuroscience students to conduct research with a colleague at McGill University.