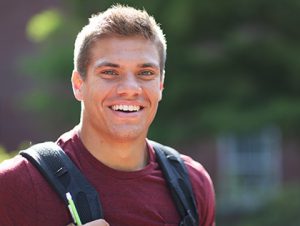 Artie Equihua ’20 — When I was around three or four years old, I told my grandfather I wanted to be a scientist. This statement did not evoke the greatest response considering he probably wanted (and still wants) me to pursue a career in professional sports. However, my fascination with science and deep desire to help those who feel hopeless has crafted my current dream of becoming a physician. However, even a kid who has dreamed of working in healthcare for his entire life can become overwhelmed by the negativity associated with it. Most recently, I had a discussion with a primary care physician working out of North Carolina. In our conversation he mentioned he had always wanted to be a doctor because of his love for science and his ability to utilize it in order to help people, but the current system was not allowing him to care for his patients to the extent he wanted to. Shortly after this comment he looked at me and said, “Healthcare is going to hell. What is it you want to do, again? Primary care? Pick something else.”

This encounter with the primary care physician had truly shook me. How could someone with such similar aspirations become so depressed and resentful toward healthcare? I tried to formulate a response that would somehow change the subject, and I ended up blurting out what his statement had made me feel. I started with the story involving my grandpa. I explained how I had identical interests and why I wanted to become a physician, but I did not say I agreed with his current perspective. Instead, I explained that I often, too, feel very cynical about the industry that I hope to someday find a career in; however, there is so much innovation and change already occurring that it keeps me hopeful.

Unfortunately, I could tell that he had not changed his position on the matter. Perhaps, he believes me to be naive, but I can live with that. Fortunately for me, with each new daunting flaw that I hear about in healthcare, I am exposed to the innovative work of twice as many people who are dedicating their lives to solving current healthcare issues on all levels. With so much innovation and optimism radiating from individuals at Volunteers in Medicine, HealthLINC, NCHICA, DHIT, Duke, UNC, and many other organizations, it is hard not to feel hopeful for the future.

This summer Equihua is participating along with Nathan Gray in a Global Health Initiative internship with Wabash alumnus Dr. Todd Rowland (www.bridge2medical.com). This is his second blog post in the series of posts on exploring the world of health care and those trying to revolutionize it. The G. Michael Dill Fund makes this internship possible.