Today I stood and watched a man die – the life leaving his body right before my eyes. His struggle for breath became harsher and harsher until an abrupt silence fell. The immediate cause of death was asphyxiation; he literally suffocated to death in front of his loved ones. The mother sobbed on my shoulder. After a few moments we went our separate ways.

What shook me was how quickly his bed was replaced. Within 5 minutes his face was covered with a blanket and the bed carted out only to be replaced by another sick individual in the already overflowing ward. In moments like this, I look to our team physicians to see how to react. Despite witnessing sad final moments of a sick man, what equally shook me was the apathy towards death seen in the medical professionals; it seemed almost casual. The team noted his death and methodically moved on to the next patient as if he had only fallen asleep.

The medical system in Uganda failed our patient in two ways. First within immediate care facilities; Mulago Hospital only has a handful of ventilators for its hundreds of patients. Because ventilators are scarce, physicians are forced to decide which patients are able to use the equipment based on their condition. Unfortunately for our patient, medical officers decided that his chance of survival was too low to justify use of the ventilator; he would take away from another patient who would have a better chance. The second failure is significantly more intricate. While our patient’s immediate cause of death was asphyxiation, his underlying causes were opportunistic infections contracted from being HIV+. If he simply took his HIV medications, he would be significantly less likely to contract diseases like cryptococcal meningitis or tuberculosis and would likely live a long and healthy life. Exactly where the health system failed him is difficult to pinpoint. Was it a lack of medication adherence and follow up by physicians? Was it the lack of availability and accessibility of antiretroviral drugs? Or perhaps it was even earlier with lack of counseling on safe sex practices that allowed him to contract HIV in the first place? Structures are crumbling not from just the top but from the core foundation. 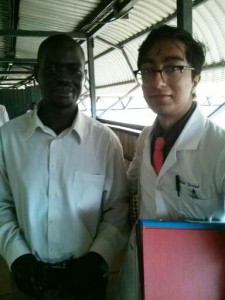 Unfortunately, these stories are a commonplace and can take a toll. Being around so much sickness and death often makes you forget about the other side. After this particularly long day, I dragged myself back to the office from the ward. In the tunnel connecting the two, a man stopped me. It isn’t uncommon to be halted in the labyrinth of Mulago Hospital by people needing directions. Not knowing the hospital very well, I instinctively began to lead him to the office where he could receive better directions. I quickly stopped when he asked me something that caught me off guard. He asked me if I remembered him. It was Kasim! Kasim was a patient we discharged a few weeks back who presented with severe confusion from cryptococcal meningitis and seizures. I was barely able to recognize him as he was standing, smiling, speaking clearly, and wearing his nice clothes – conditions I had never seen him in. I will never forget what he said next: “You saved us, you saved us!” We shook hands and even got a picture together. Even though I had a minute role in his recovery, that moment changed how I thought about many aspects of healthcare. I returned to my desk with a big smile and a different point of view. I have no doubt that my few moments with Kasim will remain the highlight of my experience in Uganda.

I juxtapose these two patients for contrast but not at all to reconcile the ups and downs. The success stories remain independent of the failures. Each day has its unique combination of joy, sadness, challenge, frustration, and success. I would have it no other way.