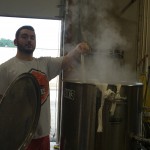 I was fortunate enough to spend eight weeks of my summer working on the northwest side of Indianapolis at a new nano-brewery called Wabash Brewing. I spent the last two summers exploring research in the organic chemistry lab at Marian University and the biochemistry lab at Wabash College; therefore, I was looking for something fresh to do with chemistry this summer. When I found this internship, I thought it presented a great opportunity to see how chemistry can be utilized in business and to experience the production of craft beer, which I was less familiar than its consumption.

There is a small office in the back of the brewery that the owners had set-aside as a laboratory to run quality control tests on the beer as it progresses through the fermentation process. Along with doing general housekeeping tasks, one of the goals for my internship set by the owners was to get the lab up and to run by the end of the summer.

During the first few weeks, it was nearly impossible to get to the lab instruments since the laboratory itself was doubling as storage space and was overflowing with mail, receipts, and other miscellaneous equipment. Unfortunately, an issue with production appeared around the same time the internship began. As it turned out, the grain necessary for brewing being milled on site before the brewing process began created dust that accumulated in the air ducts and fed a bacterial infection in the brewing yeast. This resulted in many beers turning sour during fermentation, which then had to be discarded. Since the owners worked full-time at other jobs during the week, this left a lot of cleaning for the other intern, Addison Hummel, and me to do in order to get back to the level of production that was expected. Each fermenter vessel was boiled and cleaned thoroughly in between batches, and the grain mill was moved outside to avoid further collection of dust. Additionally, we learned how to clean the vessels in which the beer was carbonated and the kegs the beer was stored in afterward. During this time, I was also able to run the taproom and interact with customers on a regular basis.

The most exciting part for me was learning the process of brewing beer from mashing the grain and adding the hops in during the boiling process to transferring the unfermented product, known as the wort, into a fermenter vessel and pitching the yeast with oxygen. Once the production issue was tackled, we were able to get rid of a lot of clutter in the brewery and the laboratory. The laboratory consists of a gas chromatograph (GC), a tandem gas chromatography mass spectrometer (GC-MS), a compound microscope, and a UV-Vis spectroscopy instrument (UV-VS). We determined that the latter two instruments were functional, but the GC and GC-MS systems needed to be professional repaired. Before the internship concluded, we discussed procedures moving forward for counting yeast cells using the compound microscope and for determining the standard reference method (SRM), or color of the beer, using the portable UV-VS instrument.

I would like to thank the Lilly Endowment for allowing me the opportunity to experience the inner workings of a business that has strong ties with science. I would also like to thank the owners, Matt Kriech, and Damon Carl, for allowing me to be a part of their dream in merging chemistry with the art of craft brewing. It has offered a truly unique perspective, and I’m looking forward to stopping by in the months and years to come for a pint and catching up with everyone I had the pleasure of working with this summer.