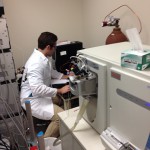 As the 2014-15 academic year came to a conclusion this past May, I found myself filled with equal parts relief at having completed my first year of college and anticipation for what was to come this summer. Similarly to most other college students, I knew that I would have to spend my summer working. Having spent the last two summers working as a busser at a restaurant, the idea of working all summer was nothing new to me; however, this summer was going to be a far different experience for me. Through the generosity of the Lilly Endowment, I was presented with the opportunity to spend the first eight weeks of summer as an intern for Perfinity Biosciences under the direction of Kevin Meyer (Wabash Class of ‘06). Perfinity is a small company located in the Purdue Research Park in West Lafayette, IN.

A great dilemma faced by modern-day chemists, biochemists, and other great researchers in the biotech industry is that while the equipment and experimental procedures used have evolved at an increasingly rapid pace, the methodology behind the acquisition and analysis of samples used has remained alarmingly archaic. It is in this unique niche that Perfinity has developed a business. To increase the efficiency of experiments, and ease the lives of other scientists, Perfinity has developed products that have cut sample processing times from over 10 hours to about 20 minutes. Along with fellow Lily intern Jake Norley ( Wabash Class of ’16), we spent the summer as a part of the research and development team at Perfinity and worked alongside the other scientists in testing current products as well as aiding in research that could contribute to future products at the company. Having only one year of chemistry under my belt at Wabash, I was nervous that I was not going to be capable enough to contribute to great work here, however, my boss assured me that the other employees had learned a lot of the science behind the work as they worked through it and not to fret. Sure enough, by the end of the 8 weeks, I had become far more confident in my scientific abilities and had learned volumes of chemistry that will be applicable in not only my future course load at Wabash, but also in attaining my goals of becoming a successful chemist after graduation. One exciting moment during our 8-week tenure at Perfinity was when Jake and I found out that the research we had done would be used to file a patent for what could potentially become a future product. While I cannot disclose what the patent entails, I can tell you that it was an incredibly rewarding experience to know that our work was able to help the company achieve some of its goals.

The small business structure of Perfinity allowed me to learn about entrepreneurship and running a small business in addition to all of the science behind what we were doing. I was able to take away lessons in marketing, sales, finance, and much more during my time here. I felt that this was a true extension of a liberal arts education in the sense of making me a much more well-rounded individual. I cannot express my thanks to the Lilly Endowment for making this opportunity possible for me and all the other Wabash interns who were able to benefit from it possible. This internship has provided me with insight into the field where I plan on developing a career, and I consider myself truly blessed to have had such an amazing opportunity and met the great people at Perfinity with whom I am lucky to consider now myself friends with.