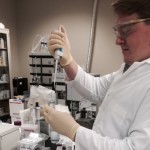 I have spent the previous eight weeks of my final summer as an undergraduate student working with Kevin Meyer ’06 at Perfinity Biosciences alongside Connor Smith ’18. This company consisting of 4 employees has given us a great concept of what it is like to work for a small company and to run a business. At Perfinity, I have been working in the Research and Development department helping to develop new sample processing technologies for the diagnostics of proteins in a mass spectrometer which has become a pressing issue in the field given the rapid growth of mass spectrometry technologies in the past decade. The growth of this technology has outpaced the growth of sampling protocol technologies for this instrumentation. Due to the issue presented, Perfinity Biosciences has found its niche. Perfinity currently has a line of immobilized enzyme products that permit the scientist to prepare samples that initially took days to complete in just hours. This is significant in that the ability to assess proteins through mass spectrometry allows researchers to understand better proteins and disease. Connor and I have been working on a product that will optimize this process even further. However, we are in the process of submitting our findings as a provisional patent so I am unable to discuss specifics.

This internship could not have come to me at a better time. I have pulled knowledge from every chemistry course I have taken at Wabash and applied it to the job. We work heavily in proteomics that Biochemistry has prepared me well for. We use advanced instrumentation such as a liquid chromatography coupled with an ion trap MS-MS that Dr. Dallinger would have loved to have at Wabash but even with the lack of one present he taught me much about the differing instrumentations in the field as well as the importance of sample preparation. We use organic chemistry to modify and alter a variety of nitrogen groups. The whole internship has brought together every facet of chemistry I have learned and done so in a very interesting way.
Not only has this internship been academically thought provoking, but it will be very beneficial for my career as I move on from Wabash. As I stated earlier, we are currently working on a provisional patent for the work that we have been doing over the course of the internship. This means that I will have my name on an actual patent for intellectual property that is relevant in the currently booming field of biotechnology. This will be something that I can put on a resume that employers or graduate school admissions offices will look at when considering applicants and it will help me stand out in a strong pool of undergraduate candidates for a position. This patent directly pertains to a field that I would like to one day be a part of and having already done established work before graduating college greatly helps me to achieve this goal. This has all been possible through the Lilly Endowment Fund without which I would be unable to have this amazing opportunity. Lilly has helped me better myself and has given me the means to achieve my goals, and I would like to thank those in charge of the fund for that. I hope that this program continues to help undergraduates by presenting them with opportunities such as the one I have.

Michael Miller ’16 – This summer I am the Biology Intern in College Station, Texas for PROFUSA Corp. PROFUSA Corp. is a company, based out of San Francisco, California that makes medical prototypes. Here in Texas, we work on preclinical testing of these prototypes on pigs. My first day on the job I was sat down and given two major projects to work on for the 8 weeks that I am here. The first; to find a better way to adhere one of these prototypes to the body of the pig. The second; to work on a way to measure blood profusion called laser speckle contrast imaging.

Finding a new adhesive might sound pretty trivial and effortless on the surface, but finding a tape/combination of tapes that will hold weight onto a pig’s skin for up to 8 hours has proven to be difficult. In my research I found 9 different tapes ranging from medical grade to electrical tapes that I thought would perform well in a series of 10 “in vitro” (not on the pig) tests. After running these tests multiple times I was able to eliminate 7 but found that the combination of two tapes, a double-sided and a single-sided tape, was also a strong candidate. I then tested the remaining four tapes on the pig and achieved my goal of finding a way to be both space efficient, and time efficient while also sticking to the pig for a prolonged period of time. Below, you can see one of the tests that I ran, not on the pig, but on myself to insure that we were not causing any unnecessary pain to the pig. 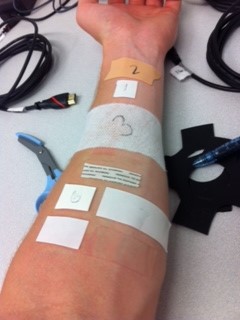 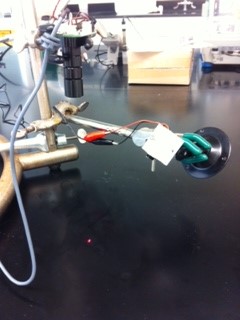 Laser speckle contrast imaging equipment is usually very expensive, but here at PROFUSA, we have found an inexpensive and easy way to achieve the same goal. Our laser speckle system, shown above (right), consists of a laser that penetrates into the skin a little bit and then bounces back, and a webcam with special lenses. We have a computer program that will only pick up the red pixels from the images that we gather and from there we can calculate blood movement. Here is how we calculate this: the movement of blood causes the light from the laser to bounce around which can be observed by the naked eye. If there is a lot of blood movement, the blurring will increase and the standard deviation of the intensity, which is calculated by the computer program, will decrease, and consequently the speckle contrast will be lower because it is calculated by the ratio between the standard deviation of the intensity and the mean of the intensity. On the contrary, if there is no movement, the speckle contrast will be larger since the blurring will decrease and the standard deviation will increase. The mean intensity will remain unchanged. Using this tool, I have found that we can observe the effects that different tapes, different sized needles, or even temperature have on the pig, because blood profusion is directly proportionate to irritation and pain. Being able to determine these effects insures that nothing we do in the lab or on the pig is going to cause the pig any unnecessary harm or discomfort.

I have learned and built on new lab skills, learned about diseases like diabetes, and built upon my critical thinking skills throughout my time here with PROFUSA. This experience has also taught me a few non-internship skills, such as shopping for my own groceries and living 100% on my own that I really didn’t think about before coming here. Having never been west of Chicago before, I drove here by myself. I have gotten a nice look at the culture of not only the west and Texas, but also a big college town. I have met a lot of great people here both in the company and at Texas A&M that I hope to keep in touch with. Although I do not have an abundance of time left here, there is still a lot of progress to be made and a lot of experiments to be run that I am very excited about. I want to thank Career Services and everyone that has put forth effort or money to support the Small Business Internship Fund for making this possible and helping me get here.

Korbin West ’16 – Since I started my internship, I’m quickly learning how little I really know about chemistry. And that is a fantastic feeling. While my internship is flying by, I’m trying to pick up as much as I can because there is no better learning environment than an immersive one, like that provided by the Indiana Internship Program. For the past month I’ve been working at Perfinity Biosciences, a small bioscience company in West Lafayette. Perfinity mainly focuses on proteomics, the study of proteins. Every person is made of tons and tons of proteins, just like the hemoglobin in our blood or the insulin in our pancreas. However, there is still so much the world doesn’t know about proteins, which is where Perfinity steps in.

Without getting too technical, we find ways to break down and analyze these proteins so others can discover more information about them. Imagine you find a newspaper that has been crumpled up into a ball, this will be our example protein. To be able to read the paper (a.k.a. extract information from the protein), we have to find a way to un-crumple it without ruining it. In a way, this is what Perfinity does for other researchers/drug companies, so that they can find new ways to battle disease and discover more secrets of the body. 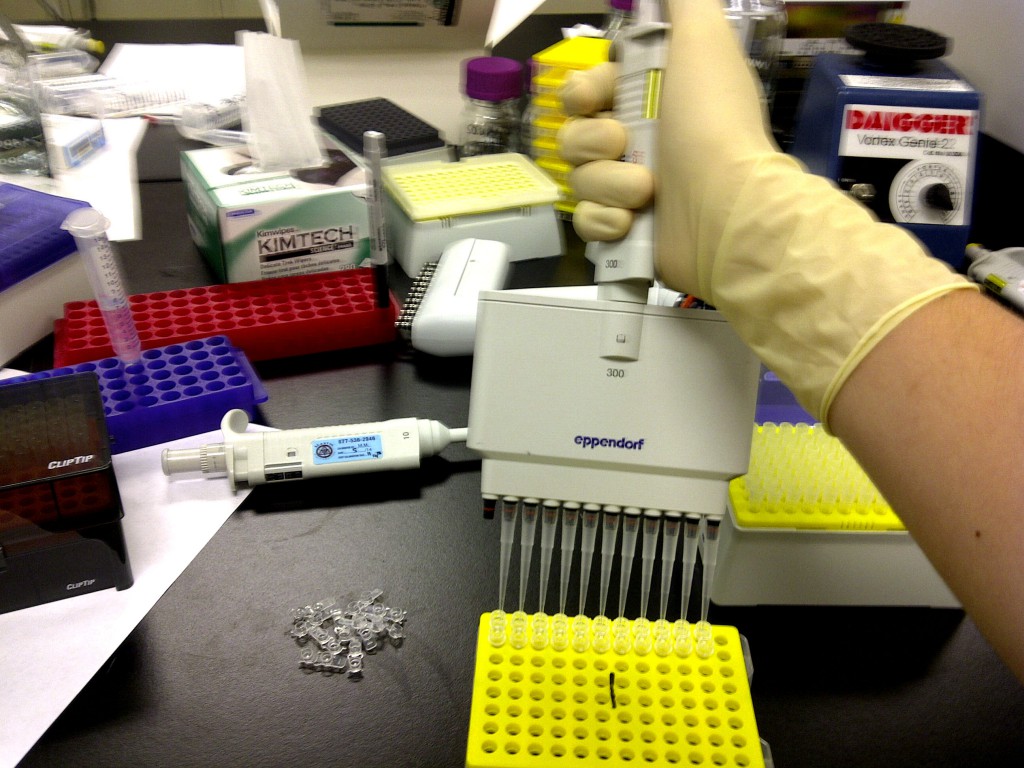 West ’16 transfers a protein solution to test tubes, allowing him to simultaneously monitor a dozen reactions over the course of a day.

As an intern, I spend a lot of my time helping out wherever I can. The majority of my time is spent in the lab, where I have various responsibilities. My daily activities range from making stock solutions for our spectroscopy equipment, to validating old protocols and researching new ones. My time here has greatly helped me develop my chemistry skill set, as well as strengthening my abilities in many other aspects. Although some of my work is quite challenging, I’m continually learning from my co-workers how to approach these issues and I’m picking up plenty of new techniques and methods. However, just like any liberal arts experience, I’m learning much more than just the chemistry behind it. Whether it’s discussing the economics behind our product, presenting results at company meetings, or anything in-between, I’m constantly rounding out my experience.

The past couple weeks have been an absolutely incredible time for me. I continuously wonder if I’m going into the right field, as I’m sure is also the case for many of my fellow classmates. I would ask myself “What if I can’t stand working in the lab all day?” or “What if I don’t have what it takes to make it?” Now, I’m happy to say, that I don’t find myself asking these questions anymore. I’ve enjoyed every second of my time here at Perfinity and although I’m not nearly done with working to improve my skills and proficiency in chemistry, I feel confident in my decision to pursue chemistry.