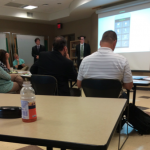 Over the course of this internship, we had the chance to create two business plans. This was an interesting, challenging, and rewarding experience that I am glad to have been a part of. The first business plan we were assigned to create was one for a restaurant. I was in the lucky group that was assigned to design a business plan for a food truck. The catch was that we only had a week to do it. My responsibility was writing the financial documents. This was a useful experience because we were taught how to use Excel to create the financial spreadsheets, which will most likely be a useful skill to have in many future careers. Although it was time consuming and stressful, I do believe I learned a lot about budgets, income statements, cash flows, and balances. The next business plan we were assigned was to create an app. This was a challenge because in this technologically frenzied culture most app ideas already have been created. I had never heard of writing business plans for an app, but I have learned that there is more that goes into creating an app than you think. I had the assumption that if you were good with computers, creating an app would be cheap and easy; which is not true because designing and programming can take months and cost thousands of dollars to develop. The group I worked with came up with a business plan for an app that acted as an index for recipes and suggests meals that can be made from entering ingredients. Overall, I thought writing these business plans gave me useful tools that I will use later on and have given me confidence to be able to write my own someday. I learned about presenting to investors, working with partners, and the preparation that goes into creating the first version of a business plan. The only thing I wish was different was if we had more choice in what industry we were making business plans for, because I think it would be interesting to create a plan for a product or service company. I would like to thank the Lily Endowment through which I was able to take part in the LABB program.

Daniel Scofield ’17 – Each year the LABB program interns are assigned a consulting project to work on based on a request from the college.  The problem that arose this year for the program was the Wabash Scheduler.  It was put upon us to analyze and come up with recommendations on how to improve the current system and we absolutely had no restrictions.  We were then divided up into three separate groups to see who was able to come up with the best plans on how to fix the scheduler problem.  Once assigned to our groups, we held a community forum as well as meetings with individuals from various departments who actively use the scheduler.  The forum as well as the meetings allowed us to gain valuable input and knowledge on the current issues with the scheduler.  After we had enough data and understanding of the scheduler, it was time to put our critical thinking skills to the test and begin coming up with possible solutions.

We were told that cost was not an issue and this allowed the groups to explore all possible outcomes which varied from a simple remodeling of the current system to an extreme which was to introduce a third-party software.  I was a member of the group that thought it was in the best interest for the college to move on with a third-party system.  Since the software was far pricier than remodeling the current system, it was very important for us to convince the audience that the software was what the college needed to fix all of the current problems with the scheduler.  The ease of use and time saved using the software would compensate for the higher price which is what we advocated.

After all of the research had been done and numerous practice presentations had been completed, it was finally time to stand up to give our recommendations.  Some would say it could be a little intimidating presenting in front of the president, deans of the college, and many other high up officials of the college, but to myself I just saw it as a chance to explain my group’s ideas in order to help out the college.  Since I believed in the product that I was presenting it made it very easy to try and sell it to the individuals in the audience that morning.  It was a great honor being able to work on this consulting project because it showed the great amount of trust that the college held in us.  It’s not very often that a college passes along a significant campus problem to a group of students and that is what makes this program so special.  Not only do you learn the essentials of business through discussions and site visits, but you also have projects that you have the opportunity to see all the way through.