First week is down in the books. During our first week we were tasked with crafting a business plan for a variety of different restaurant types. Beginning this business plan has been eye opening as I am just being introduced to the business field. There is so much that goes into a single business plan and I am intrigued to learn the ins and outs of it, as we work on it the next two weeks. One of this week’s highlights was watching Shark Tank. I’d never seen this television show before. Watching entrepreneurs give pitches of a lifetime in front of four “sharks”, venture capitalists, gave me ideas for future endeavors. I was able to make connections to real life business, and our current business plan because of the show. Every company is backed by a strong business plan, as it is the foundation and glue to any 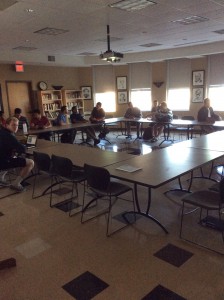 successful company. Weston Gregg, who led the LABB program the first week, occasionally paused the show, to ask questions that kept us engaged. Often he would ask if we would invest in the entrepreneurs company, I’d like to think that investing in other people’s dreams is just as important as investing in your own. Next Monday we are planning on giving pitches of our own and I hope to use some of the concepts of presenting that that we were able to observe on Shark Tank. Many times on Shark Tank poor ideas are overshadowed by the strength of the presentation. It is my goal to be such a strong presenter that no matter the content, I am captivating and convincing. For example, the group of interns gave pitches about ourselves in order ascertain our strengths and weaknesses so that we could be divided into groups for our first business plans.  I take pride in my ideas and values, which is what I believe made my pitch strong. I was assigned to a group that I believe is going to be extremely successful. To be apart of the business field, we must be self-confidence, and put our best foot forward in every endeavor. Finally I would like to thank the generosity of the Lilly Endowment for providing me with the opportunity to take part in the LABB program.

Joel Whittington ’15 – The Liberal Arts Bridge to Business (LABB) program has been one of the most educational experiences I have had at Wabash, and it is almost over. It’s hard to believe that there is only one week left of the LABB program. It has been a challenging summer so far; by this point we’ve covered everything there is to cover about business startups and starting businesses of our own.

With our business plans done, IBM was the focus of this last week. The tech giant is a far cry from the small startup companies we had read about. Like the other firms we have looked at, we read a study covering a major decision that affected the direction of the company in a major way. This study dealt with IBM’s creation of BlueGene, the world’s fastest computer, in the early 2000’s.

We did more than just read about the company. On Wednesday we got the chance to talk, via Google Hangout, to Bill Kerst, a self-proclaimed ‘Wabash Groupie’, and Rob Shook ’83. Both are employed by IBM and have traveled the world on projects for the company. We spoke for a little over an hour about the pros and cons of working for Corporate America as opposed to smaller firms. Surprisingly, Rob told a story about how IBM had taken care of his family on one of his business trips to Australia in a way that didn’t fit with the ‘Evil Empire’ persona that big corporations all seem to have. At the end of the talk, these two very successful men gave some advice on getting our feet in the door in a large corporation like IBM. Bill’s advice was to “shadow people wherever possible” while Rob ’83 strongly advocated interning, which is how he got his start at IBM. Both men were cool to talk to and it was a pretty laid-back conversation. Like everything else in this program, I got a lot out of this conversation. This program really is a crash-course MBA. I never would have thought I could learn as much about business as I have in the last six weeks. I’ll be a little sad when it’s over after next week, but I know it’s been worth every minute and I’m glad I was chosen to take part.