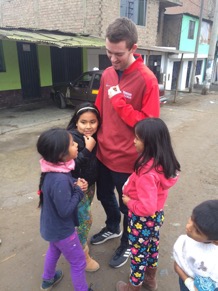 Joey Ballard ’20 — Oddly enough, seeing a chicken has been one of the most thought-provoking experiences I’ve had in Perú. As we drove through the countryside, I was in awe of the sights provided by the mountain ranges. Eventually, I began to pay more attention to the sights right in front of me – people’s homes, street vendors, and stray animals. We had been stopped for a decent amount of time, and I remember watching a chicken. It carried on with its strange and frantic foraging behavior, crowing at the top of its lungs from time to time. It was oddly comforting to realize that the chicken didn’t know that it was a Peruvian chicken; it just knew that it was a chicken. That chicken would act the same regardless of the country it happened to be in. Seeing it in its natural habitat reinforced how socially constructed our national identities truly are. Fundamentally, we are all the same, but our social identities can make it seem otherwise.

This experience made national identities seem so superficial to me, and while that might be the case, they are not without consequence. The Venezuelan Crisis has been going on for several years now. The new stories covering it tend to stay at the national level, focusing on governmental action (or inaction) and large-scale trends. However, my time in Perú has showed me how these storylines translate into the lives of real people.

Wabash’s Global Health Initiative offers several weekend workshops run by local community leaders in Perú. One of these programs is called “Creciendo Juntos” (Growing Together) and focuses on public health topics for children. The idea is to teach them how to live healthier lives and have them teach others to do the same. At my first workshop, we had a Q&A session so that the kids could ask questions about the United States. Many were curious what American currency looked like, and they collectively let out an “oooohhhhhhh,” as I showed them a $1 bill. Shortly after, a girl showed me a few Venezuelan bills that she had. She told me that her family immigrated to Perú two years ago and that it has been “difícil” (hard). I asked her if she was going to exchange her money for soles (the currency used in Perú). In response, she clutched those bills close to her chest and shook her head to say no. To her, the value of those bills is not just monetary – they provide a connection and reminder of her home and help her maintain her identity.

Today, people are literally fleeing Venezuela to find refuge in other countries. To many, anything is better than remaining in Venezuela, so they accept being paid less than a native citizen would. This has resulted in a significant job displacement creating tension for Venezuelan migrants in their new homes, and I imagine this has contributed to making that little girl’s journey “difícil.” In addition to the public health education from “Creciendo Juntos,” the human connection and sense of community it provides are so important. That girl had friends that made her feel welcome because they rejected the stereotypes that can arise from socially constructed national identities. I hope that we can all learn from them.