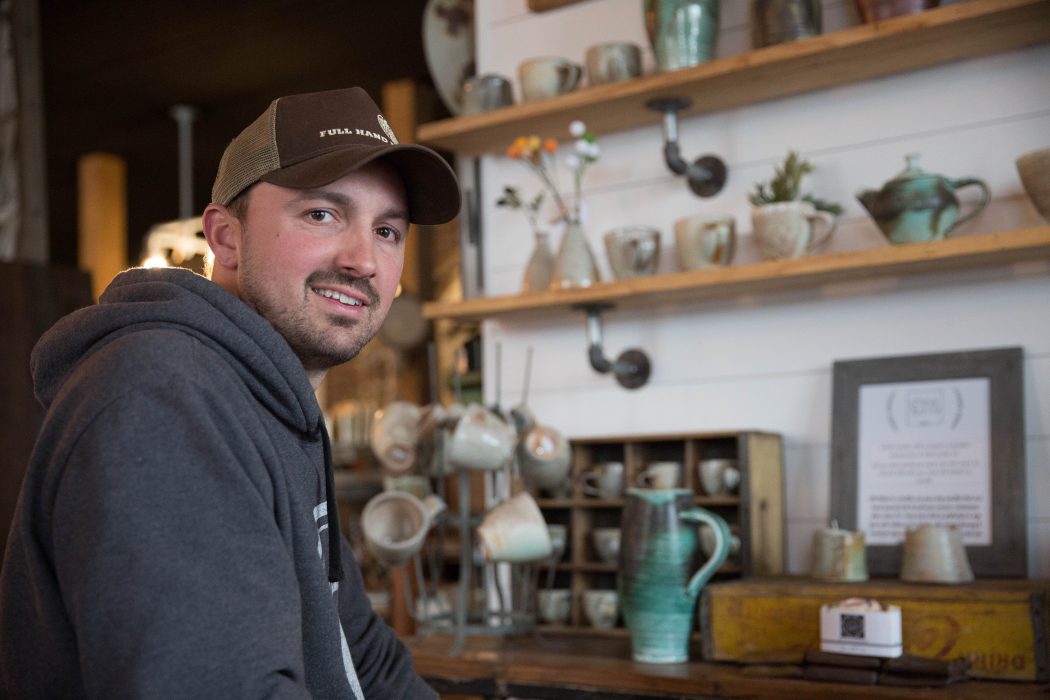 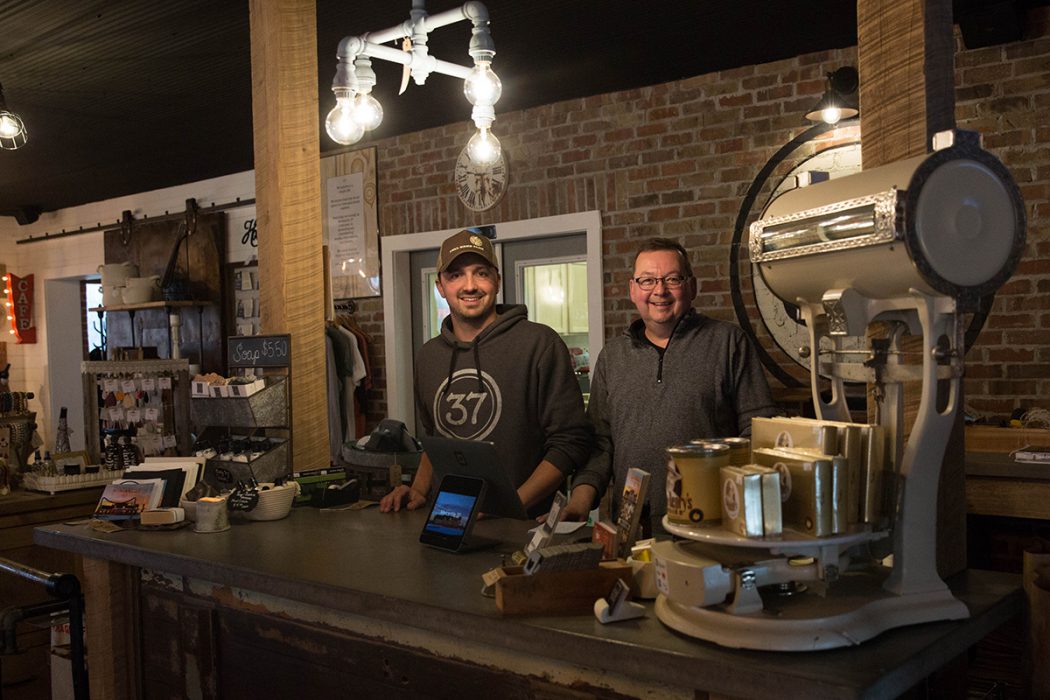 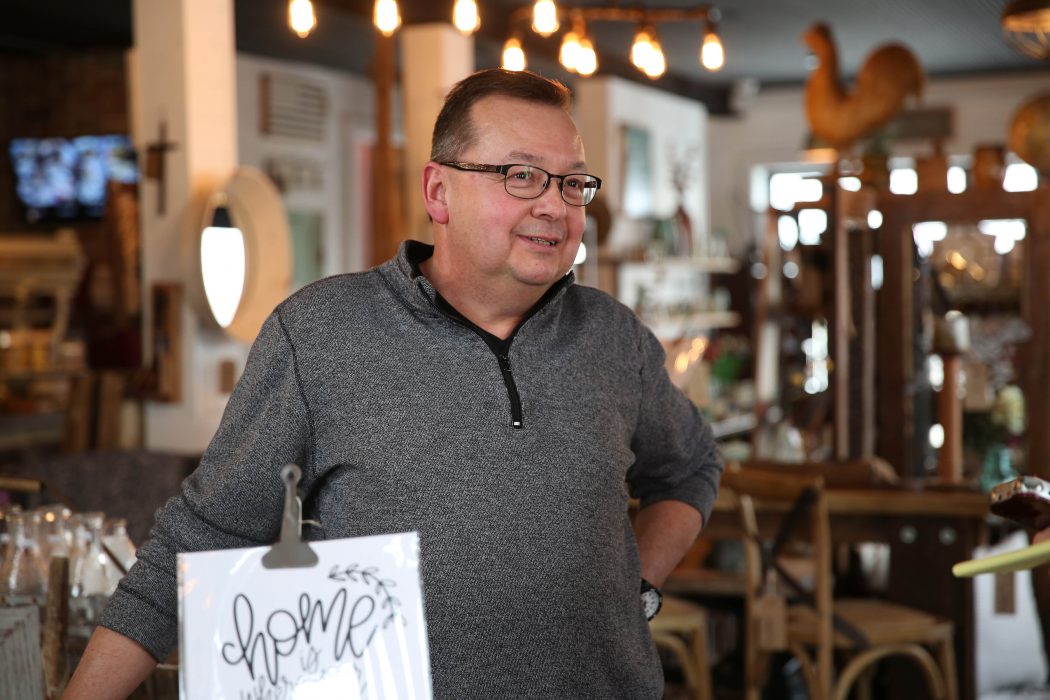 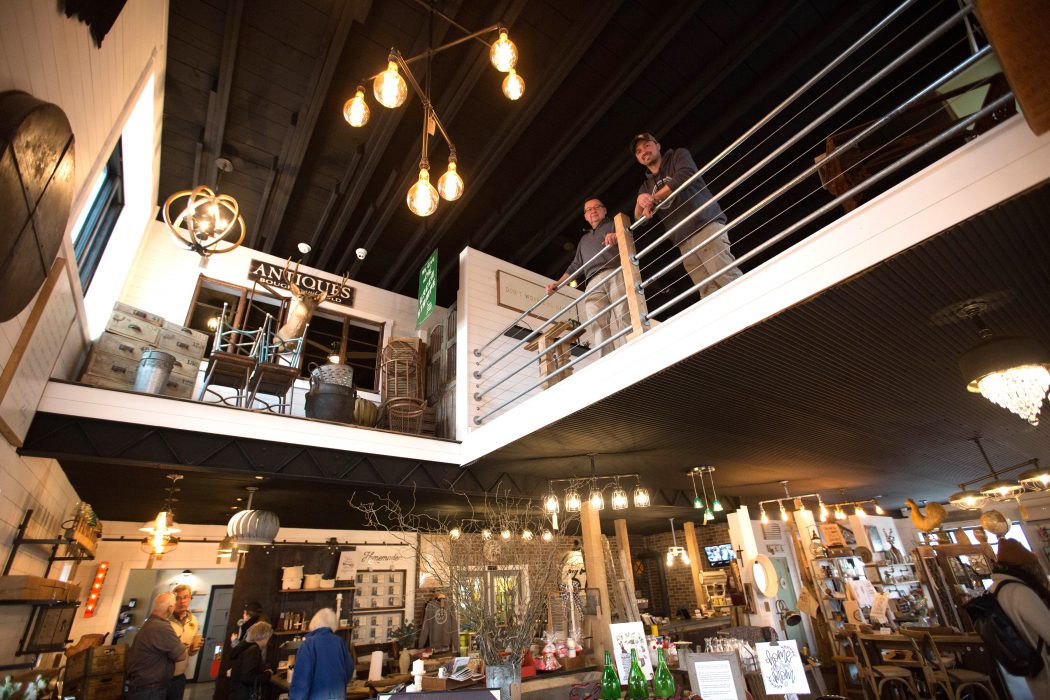 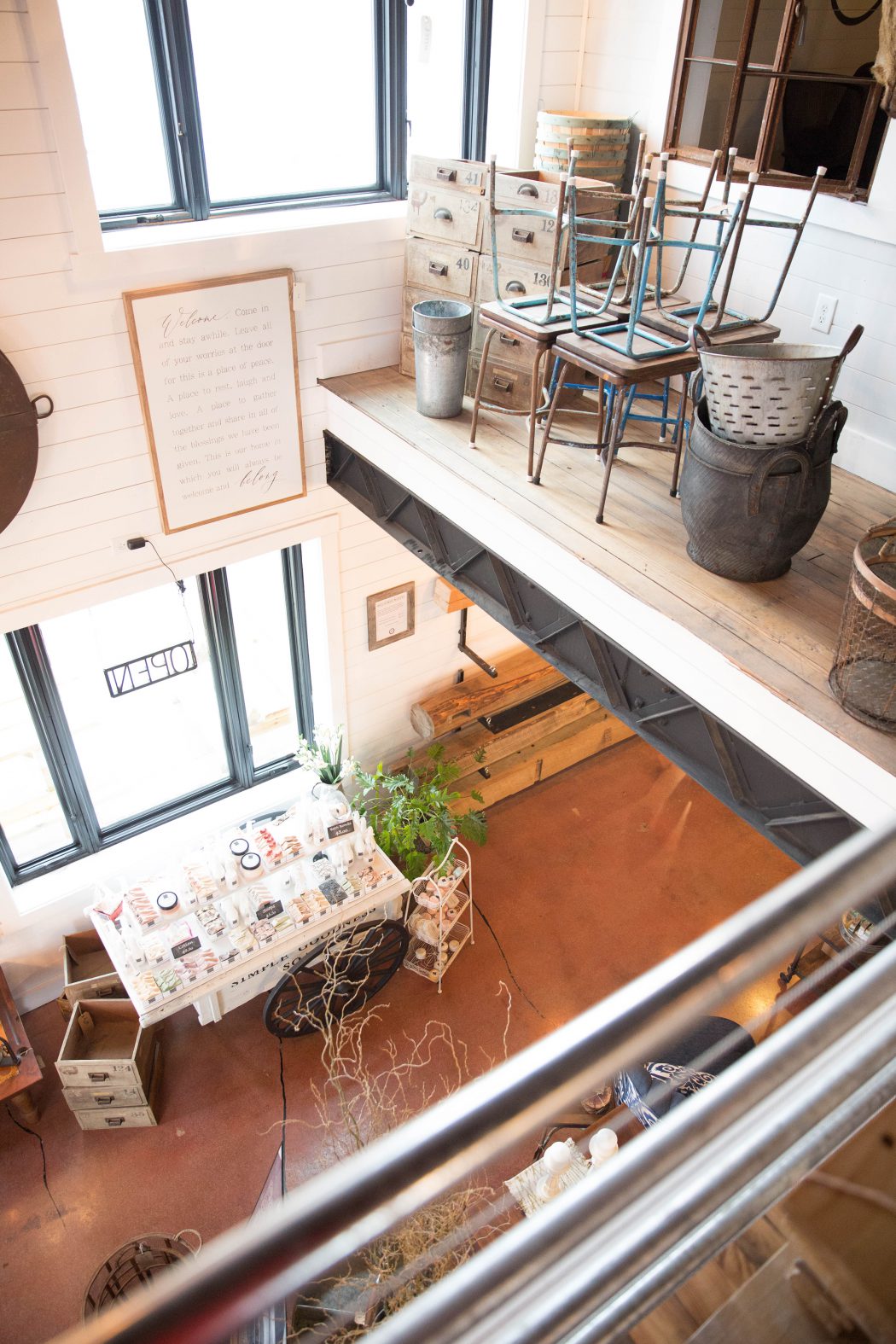 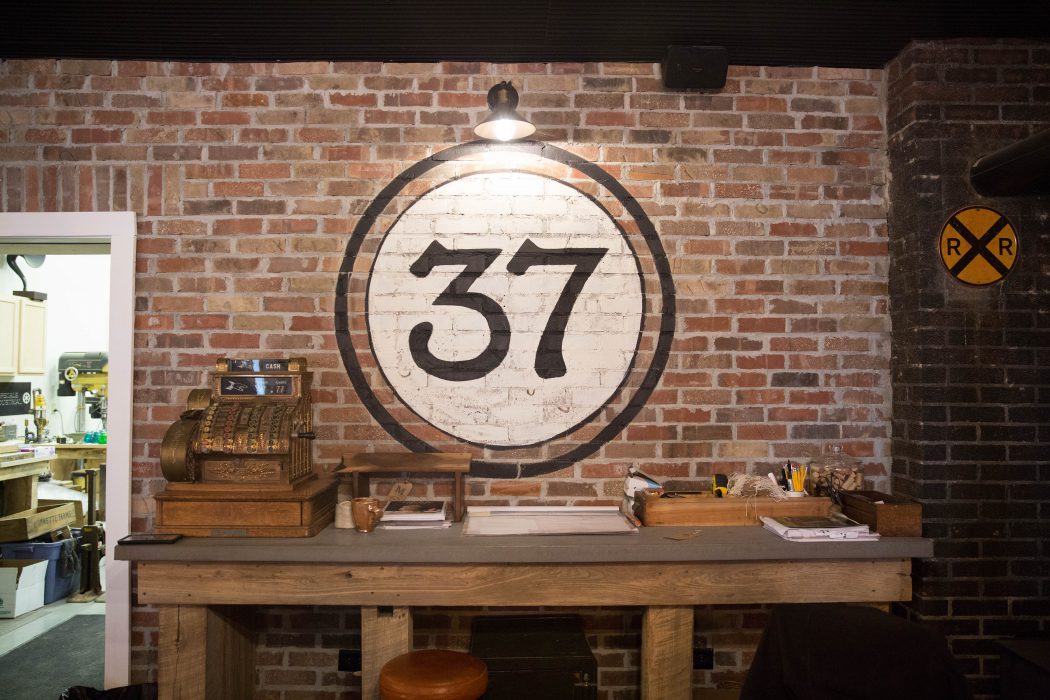 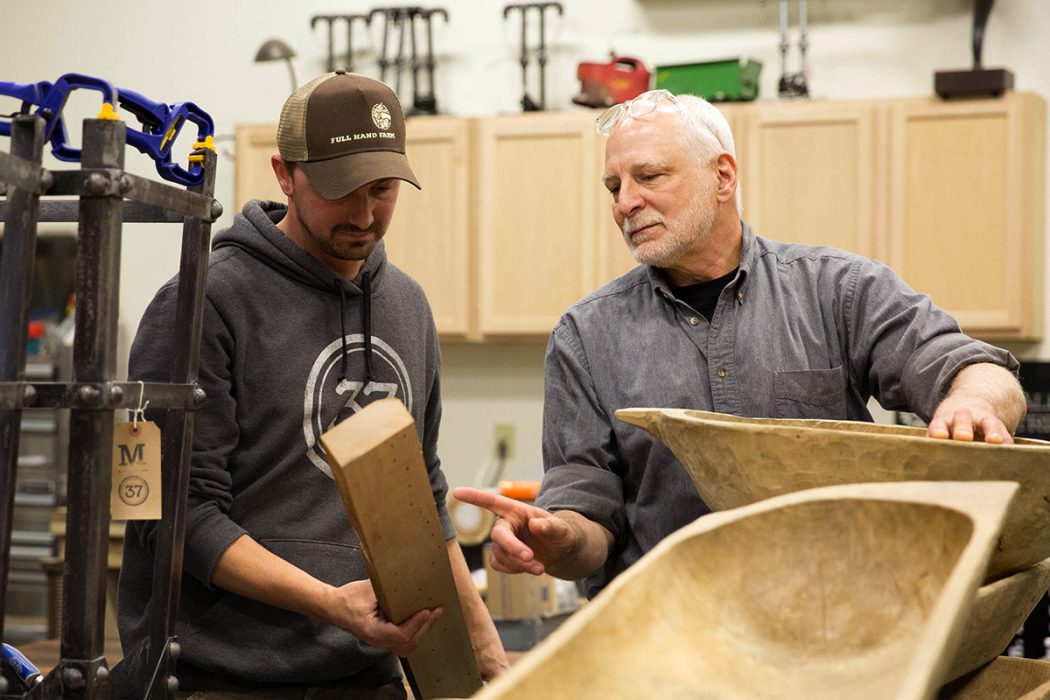 When Nick Roudebush ’08 was a boy he told his father, “I’m not going to do what you do for a living.” Now they’re working together.

Nick Roudebush gets that.

In 2011 he was making pottery in a wood-fired kiln, finishing his MFA at Notre Dame, and exploring the virtues of wabi sabi, the Zen Buddhist notion that sees beauty in the imperfect, even in the old and broken, and finds profound teachings in the simple, quiet, and humble facets of life.

“Emptiness is full of potential, and ugliness becomes beauty,” he told WM then, explaining the seemingly random process through which the koge bottles and pots he made would “reveal themselves” through unexpected results.

Eight years later he’s standing on a mottled concrete floor in Mercantile 37, the abandoned truck stop on Highway 37 near Atlanta, Indiana, that Nick and his father, J.R., have resurrected, redesigned, and expanded into a café and artisan showroom for 50-plus makers from central Indiana.

And the conversation sounds familiar.

“We didn’t want to have a design plan, but we had to buy one so an architect could sign off on it for our permits,” says Nick. “We didn’t look at it once.”

“Both of us had the same vision,” says J.R., who retired last year from a career in the consumer foods industry. “Every morning we’d have an artists’ conversation. We’d see things, we’d try things. That vision played out day by day.”

“The building would speak to us,” says Nick. “We’d go back and forth; it was never like we thought it would be.”

He points to the floor.

“Wabi sabi celebrates imperfections,” says Nick. “Like this concrete—we didn’t think much of it, but a guy said he could grind it down, he did that, and we liked it.”

So Mercantile 37 was built much the same way as many of the artful products created by Nick, J.R., and other local artisans who sell their work there.

It wasn’t quite that easy.

“I used to drive by this place every day when I was working at the farm,” Nick recalls. It was late 2017 and he was an adjunct professor of ceramics at Indiana Wesleyan and working part time on the farm that belonged the family of his wife, Emma.

“I decided that we were either going to have to make farming my everyday career, or spend more time making things. Emma is pretty conservative financially; I was surprised when she said, ‘Let’s find a way to make things.’”

About the same time, J.R.’s retirement hobby of building and selling industrial/farmstead-style light fixtures was booming into a burgeoning business, and he needed more space. That got Nick thinking: “One day, instead of turning for home, I pulled in and sat here and called my dad and said, ‘Let’s look at this place.’”

This place was a mess—but with history. Built in the 1940s by Cecil Scott and his wife (Emma’s great aunt and uncle), Scotty’s Inn became a favorite stop for truckers, local farmers, and travelers. It changed hands, re-opened as Wheeler’s Restaurant in the 1970s, and was well-known for its pancakes and biscuits and gravy until it shut down in the late 1990s. It had been abandoned nearly 20 years.

“Word on the street was that something could be done here,” says Nick. His father wasn’t so sure.

“People said there were infrastructure issues, that you’d never get a septic system to work,” says J.R. “I dragged my feet for a year—it was way more money than I wanted to spend. But Nick persisted.”

They had to cancel closing on the building three times because their drainage plans had not been approved. For Nick, the local government bureaucracy proved more maddening than any obstacle in the building itself.

“But once we committed, we figured we’d find a way to get it done,” says J.R.

Father and son had worked on small projects before, but nothing like this.

“Mostly handyman stuff.” J.R. laughs. “Nick was always handier than me, which made me mad.”

Much of the early work on the building was demolition, and one day in particular shed new light on the project. At one of those morning “artists’ conversations,” Nick and J.R. decided to rip out a section of the second floor.

“There’d been a fire there, the floor was bad, and we wondered what it might look like opened up,” says J.R. “When that floor came out and the walls were still standing—that was an eventful day!”

Today that opening is the airy, light-filled entrance to the showroom, the signature space of the building.

Not every decision worked out so splendidly, and there were long days, cold, late nights, and lot of sweat during the nearly nine months it took Nick and J.R. to give shape to their vision.

“You should hear them, the way they jab, the way they talk to each other, the way they work things out,” says Wabash Professor Emeritus of Art Doug Calisch, one of several friends who pitched in on project. “Definitely a father and son!”

“It was something, really something, working together like that every day.” J.R. smiles.

Opening day was something else. Saturday, September 29, 2018, saw crowds larger than either Nick or his father had imagined. The parking lot and surrounding fields were full of the cars of people curious see the new café and showroom.

“There was a line at the door of the café when we opened,” Nick recalls. “They just kept coming, and there was steady strong business through Christmas.”

‘What’s really fun for me is seeing the makers in the building,” says J.R. “A lot of them are young—it’s cool to see their skill and their passion for what they do.”

“It’s rewarding to provide a space like this for them,” says Nick. His own work has shifted from “making art for the gallery to making products for people.

“I want to design things for people to use that are artful and well-thought-out.”

“We’re not an antique store, we’re not an art gallery. Everyone has slightly different ideas about the farmhouse aesthetic, and I’m becoming more open to other handmade objects that weren’t in my original vision. But it’s got to be a quality item.”

J.R. saysgreeting and serving customers at Mercantile 37 takes him back to his youth.

“My dad owned a grocery store, and I worked with him, and Nick is working with me now. It doesn’t feel like a job.

“I love seeing Nick do what he always wanted to do.”

Much of what Nick wants to do is in the woodshop that takes up about a quarter of the building’s first floor. Visitors can watch through windows as tables and other pieces are made.

“A lot of people who come here say, ‘Thank you for bringing this thing to life,” says Nick. “This building has done a lot for us.”

His four-year-old son Everett likes to clean up the shop after his dad is done.

“So we have three generations in here.” Nick smiles. To be working with his dad is as much a happy accident as any piece of art Nick ever created.

“When I was a kid I told my father, ‘I’m not going to do what you do.’ He encouraged me to find my own path, and I held on to that at Wabash and ever since. Now here we are working together, and in a building that was part of Emma’s family too.

“I hope this can become something I can hand down to my kids, though I’m not going to push them one way or the other.

“But I’m definitely going to encourage them to make things.”

Professor of Art Emeritus Doug Calisch was re-purposing and making long before today’s re-purposers and makers were born. He was Nick Roudebush’s teacher, helped with some of the renovation of Mercantile 37, and was one of its first artists.

“When I was at Wabash and in his studio, I could see that he was making art and things for the gallery, yes, but he was also making things for people,” says Roudebush. “He changed my life.

“In the academy, anything that was useful got demoted from the ranks of high arts; that’s been overcome in the last 10 years or so, but that was the thinking for a long time.

“Doug knew better, he was ahead of that.”