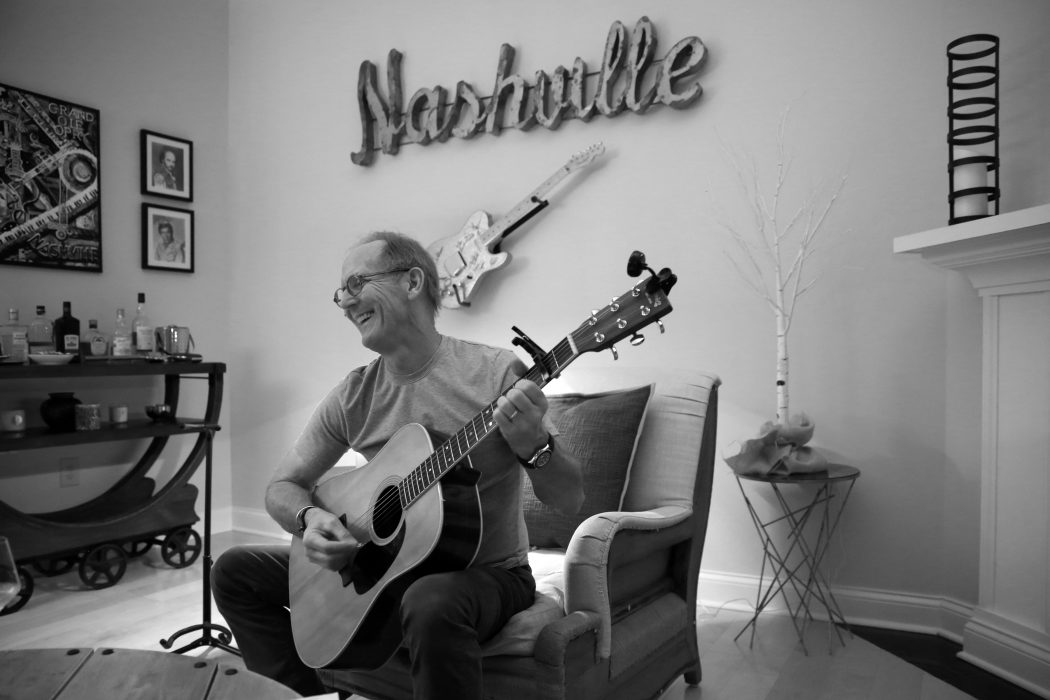 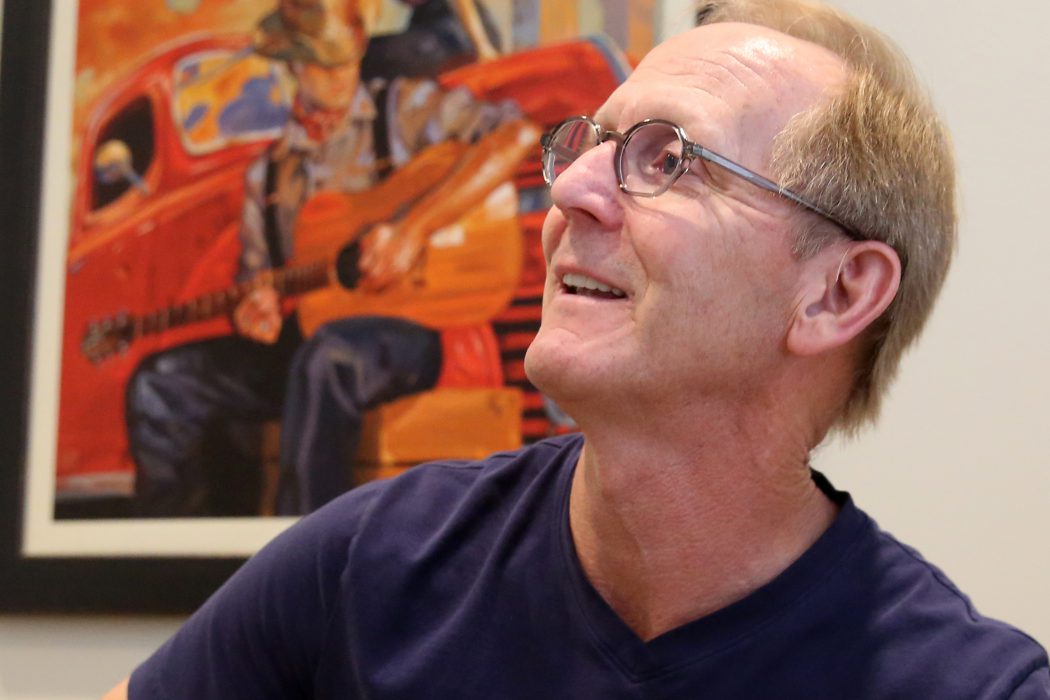 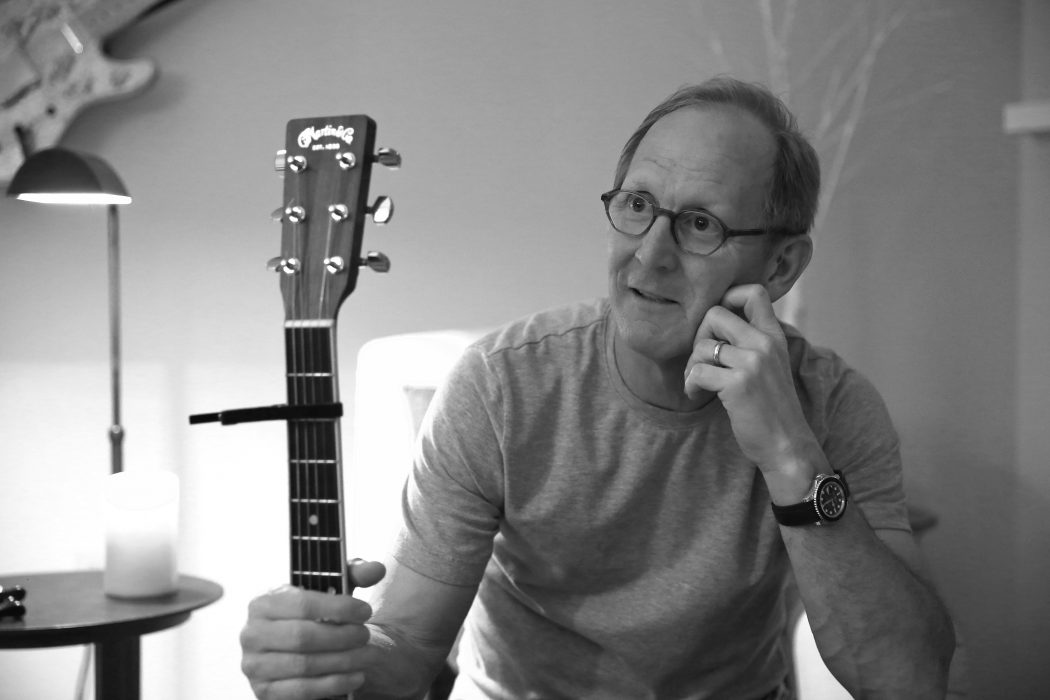 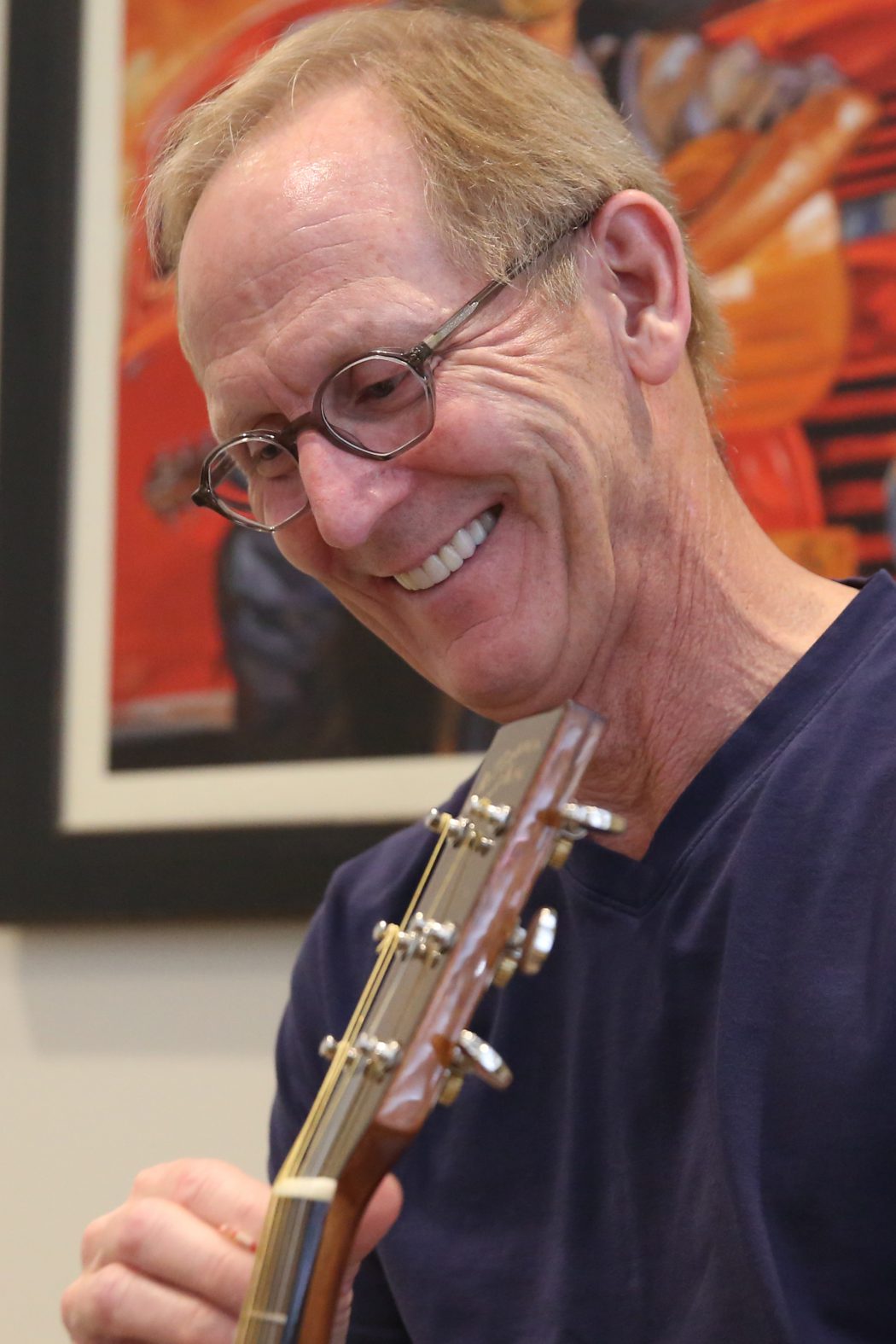 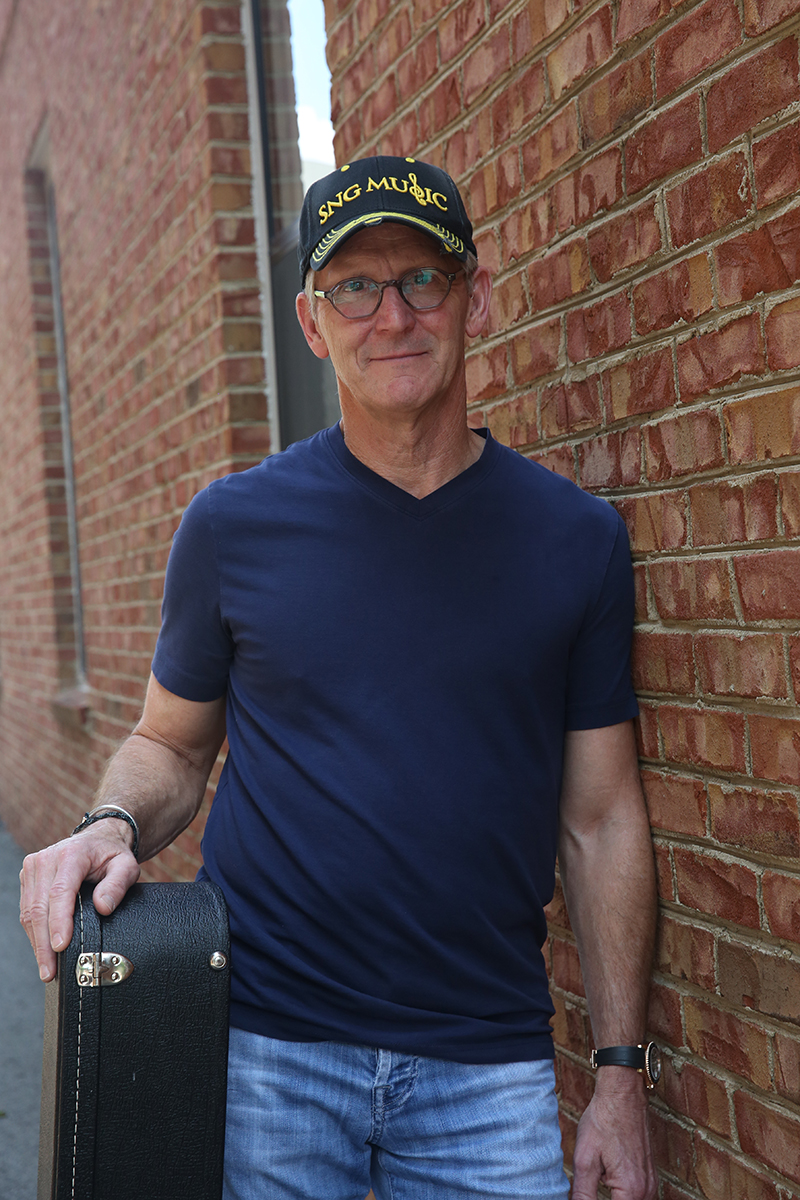 GARY REAMEY ’77 BRINGS HIS BUSINESS ACUMEN AND A LOVE FOR THE CRAFT TO SNG MUSIC’S MISSION TO MAKE GREAT COUNTRY MUSIC AND DEVELOP THE NEXT GENERATION OF SONGWRITERS.

If life can be a song, then Gary Reamey’s has those lines in there somewhere.

At least one guitar graces each of the homes he owns, and there’s one in most offices and writing rooms at SNG Music, the publishing company on Nashville’s Music Row he co-founded after taking early retirement from running Edward Jones’ Canadian operations. There are decorative guitars and guitar art on the office walls interspersed with the gold and platinum record awards earned by SNG writers like Carson Chamberlain, Marty Dodson, and Mark Nesler.

Reamey grabs a dreadnought guitar from a stand in his office and strums a couple of chords.

“I didn’t think I was musically inclined as a kid, but after my mother died I was looking at some old pictures, and at four years old, I had a guitar; at eight, I had a guitar. So there was music—I played some guitar at Wabash—but I never really focused on it.”

Then about 20 years ago, he wrote a song for his daughter Adrian’s 15th Christmas.

“Three of my five children were adopted; Adrian was from Santiago, Chile, and we flew down to pick her up.”

The chorus opens with the moment he met her:

What can you do, when she smiles up at you?/What’s there to say, when she takes your breath away?

“I had it recorded and put it on her iPod. She said, ‘That’s great,’ and she wanted to start playing guitar. She eventually lost interest, but I kept at it.”

He wrote songs for himself and his family and friends, and the hobby became a passion. Adrian’s song would play again as the father/daughter dance at her wedding.

“The guitar is a tool to help express what I’m feeling. I’m really a lyricist; I play just enough guitar to write songs.”

He noticed soon after he came to Nashville and dove into managing SNG that he was playing less. There were so many amazing guitarists; he got caught up in the business side of the work. And if Reamey played less, he wrote less, and he didn’t want to lose that.

“When you’re writing, you’re more attuned to everyday life, to what people say, what might become a song. So now I make sure there’s always a guitar around, though Joanne may suggest enough is enough someday.”

He smiles. Joanne, his wife and SNG music partner, isn’t putting a stop to anything yet. There’s a sheet of songs tucked under the blotter pad on his desk—covers she has asked him to learn so he can play around the house and with guests.

Six years out from Edward Jones, Reamey calls himself “a music publisher that writes songs.

“I’ve signed 11 songwriters in five years, seven are currently with us, and these writers have a total of 15 No. 1 songs in country music.”

He’s also co-written about 160 songs himself in the past five years, some with SNG writers, some with other top writers like Dan Couch ’89. But he plays down his songwriting credits.

“Our seven other writers have written about 1,900 songs; my own writing is not my main focus here.

“But I love it. To be able to sit in a room with writers, start with an idea, and finish with a song that can make a grown man cry—there’s nothing better than that.”

It was one such session that led to an unexpected partnership with Grammy Certificate-winning song writer Steve Leslie and the founding of SNG.

They weren’t even supposed to meet.

Not long after he retired, Reamey was getting together with friends from Edward Jones for what had become a tradition—every six months they’d visit a different singer or songwriter and talk about their shared passion. This time the scheduled songwriter had to cancel, so Reamey found a Web site that matched people with advisors from various careers.

“I typed in ‘songwriter Nashville’ and I saw this guy, Steve Leslie, who looked like James Taylor and had a Grammy certificate,” Reamey recalls. “We gave him a call, spent the day with him, and then one of the guys said, ‘Well, let’s write a song.”

Leslie had to leave about half-way through writing it, but he was hooked.

“He said, ‘Let’s get together tomorrow and finish this. It’s a great song.’”

Garth Brooks thought so. After they finished the next day, Leslie sent him the song—“Masterpiece”—and the music legend put it on hold for his next album.

“He kept it on hold for three or four months, then sent us a nice note saying, ‘Hey guys, great song, but not for this album—maybe the next,’” Reamey says. “But it was enough to tell me, ‘You know what? You can do this.’”

He had been looking for that next step: “You can’t just retire anymore; you have to retire into something.” A year working on his golf game proved that wasn’t the answer. He’s a Wabash trustee, was serving on other boards, and was a colonel in the Canadian Army, but none of that fit what he was looking for long term.

“I’ve got to keep doing something that challenges me,” he says. Music publishing in Nashville would combine his love of music, a new field in which to apply his business acumen, and a booming city to work in. So in 2014, Reamey and Leslie opened SNG Music, with a vision to become home to top country songwriters while developing the next generation of talent. Leslie moved on to other projects in 2018, and today Reamey serves as managing partner.

“When people start talking about how the music business has changed in Nashville, how tough it is, I tell them, ‘Well, it’s never been better for me!’ I’ve only been here five and a half years—this is all I know. But whenever I hear someone in Nashville complain about the regulation on licensing rates or other things, I tell them, ‘This is like the wild, wild West compared to the investment industry I came from.’

“It would be work if I didn’t love it so much. There are a lot of other ways you can make a return on your money. But it has felt good to transition out of the investment world to something new.” 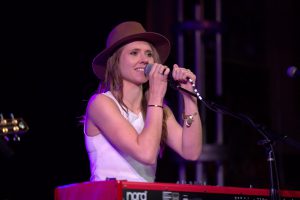 That move made all the difference for songwriter Zarni DeVette. Born in South Africa, she earned the highest award for songwriting at the famed Berklee School of Music in Boston, then spent three years and more than 200 shows as a touring musician. SNG signed her as an up-and-coming talent in 2016.

“Lurking in the depths of my spirit was an undeniable truth trying to come to the surface: I don’t want to be a touring artist anymore,” DeVette wrote soon after being signed. “I have a different kind of drive; the drive to write and write and write again. The drive to pitch a song to several artists and carry on until someone records it; the drive to co-write with hundreds of strangers and love every part of it.”

She hadn’t known positions with publishers like SNG even existed, work she calls “the coolest damn job in the world.

“They go to the grocery store without being hassled by the press, they play intimate shows when they want to, and they turn on the radio to hear Taylor Swift singing a song they wrote.”

After an interview and a song-writing session with Leslie, she was offered the job by phone while standing outside a Mexican restaurant in Houston.

“I could feel a sense of relief and validation wash over me like never before. I had become so careful about getting excited because more often than not, things resulted in disappointment. For the first time I’ve met someone who believes in me fully and is invested in helping me grow and realize my potential.”

Reamey strums the dreadnought and begins to play “Masterpiece,” the song that started it all for SNG. He sings with a strong, warm tenor voice.

I’m still a work in progress, Lord knows I’ll always be/But inside this old block of marble, she saw a masterpiece.

Is that his vision for his writers—to find that great song they’ve always hoped to write?

“Everyone we’ve signed at SNG came here looking for something, and signing them was a way to help them be better, help them move on in what they want from their lives. It’s rewarding to give them an opportunity to fulfill their dreams.”

Will that be his—and SNG’s—legacy?

“The legacy is that the younger people here take it on and continue to grow it,” Reamey says. “When will I be done? I may never retire, just phase out. Not manage the place, but I’ll always be playing guitar and thinking about songs.

“It never gets old.”

Reamey may have left the investment world behind, but he brought some of its best practices with him.

“At its core SNG is what I learned at Edward Jones: You hire good people, keep your expenses down, create an atmosphere that’s collegial, and you set the organization up so everyone has incentive for everybody else to do well. SNG is a private partnership, so everybody has a chance to own part of the business.”

Each writer also develops an annual business plan, outlining what they hope to accomplish in the coming year.

“It’s the first time a publisher has ever asked me to do that,” says Marty Dodson. “Gary is great at bringing these business principles into what we do…it has helped me become more balanced as a writer.”

You see the collegiality during an impromptu listening session, when Reamey, creative director Aubrey Schwartz, licensing director Kathleen Mullet, and consultant Mike Sebastian review the latest batch of songs by SNG’s writers and others. The vibe is laid back, the different tastes acknowledged and valued, with a touch of humor.

“When we’re listening to songs, they’re the ones making the decisions,” says Reamey. “That’s why you hire good people.”

His latest project enters even more unknown territory, with more of those challenges he relishes.

“We’re trying to get a country music musical to Broadway—that’s a whole different world, but a fun way to share our music with a different audience.”

After three years of workshops in New York City, Reamey’s musical will premiere June 11, 2021 at the Pittsburgh Public Theater.

“Someday, if I’m standing on stage accepting a CMA Award, or a Grammy, or a Tony, I’ll thank Joanne—without her encouragement I would never have ventured into country music and theater. I’ll thank my partners and associates at SNG. But I’ll also thank my partners at Edward Jones, because we wouldn’t be here without them.”