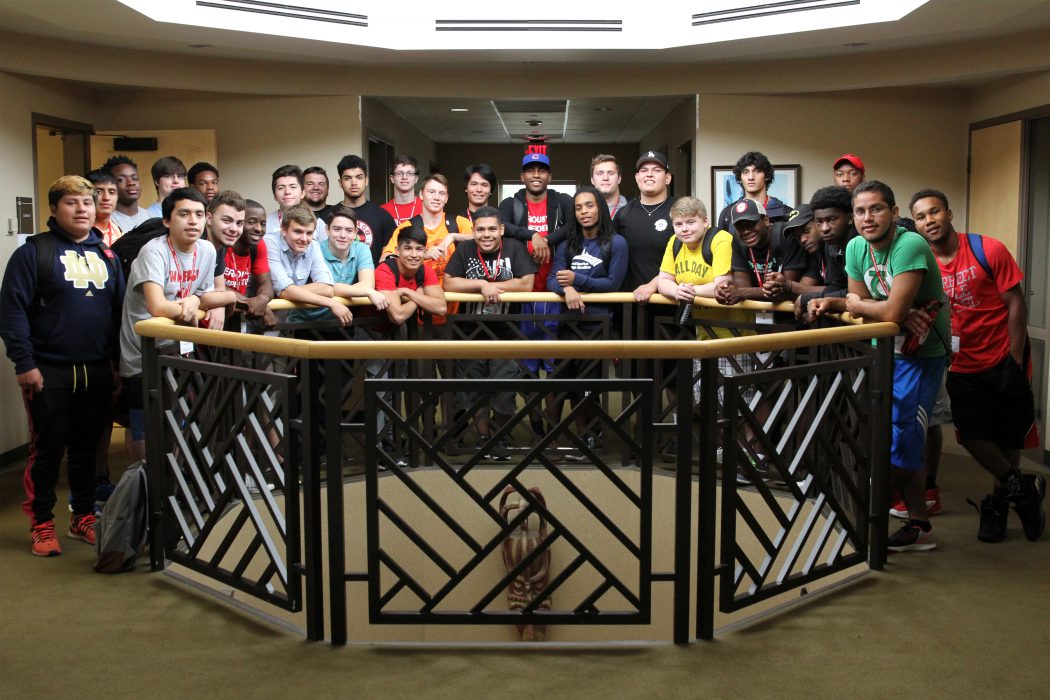 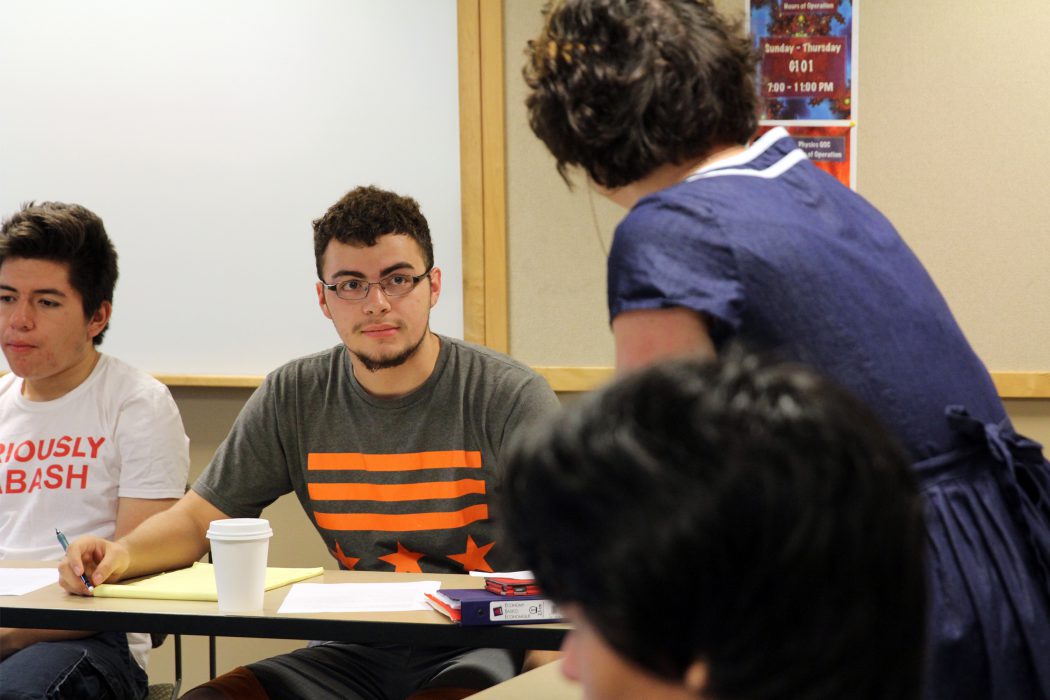 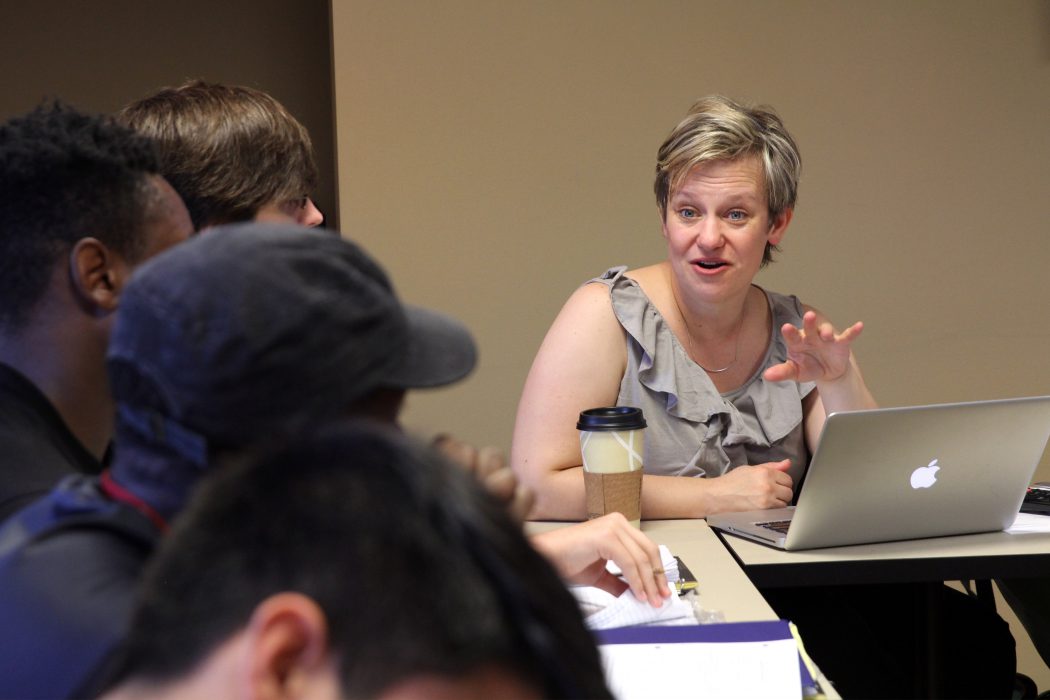 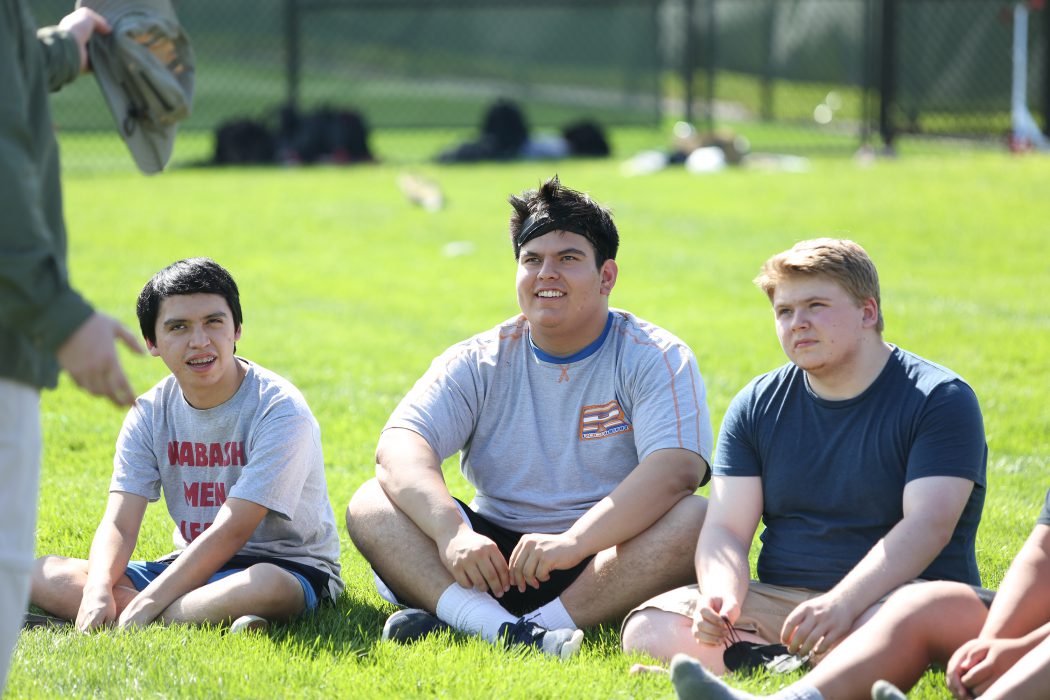 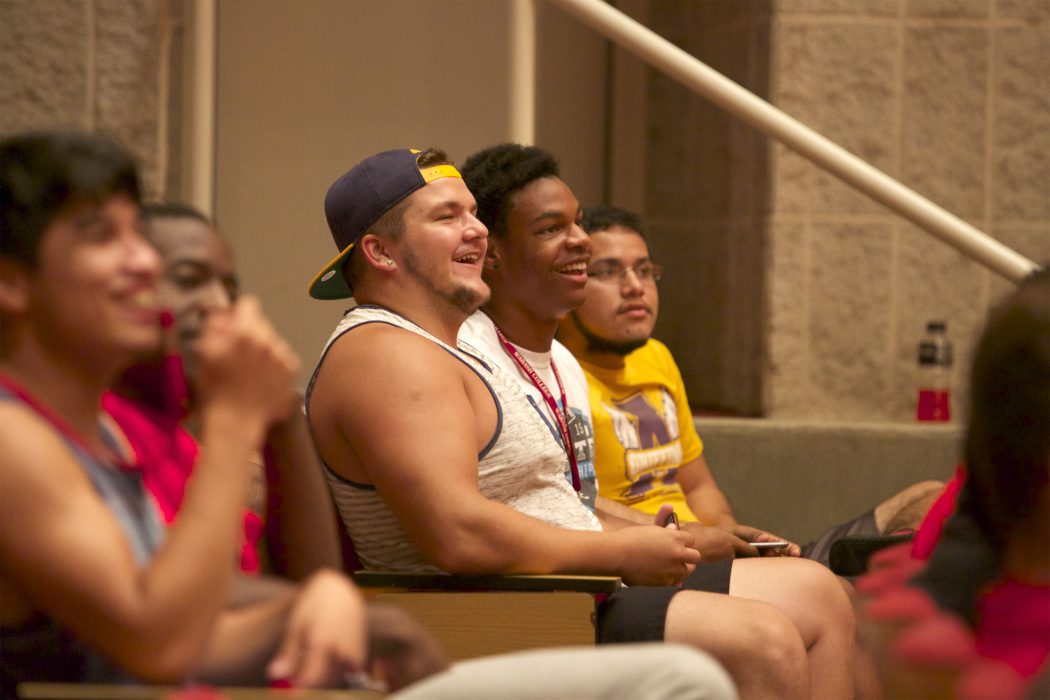 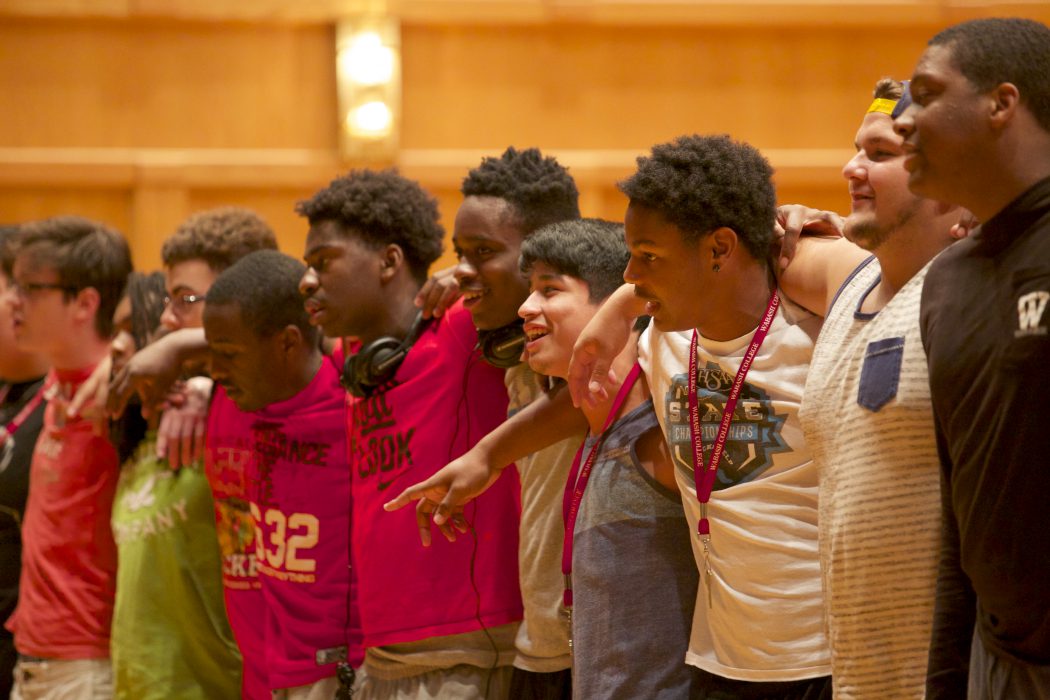 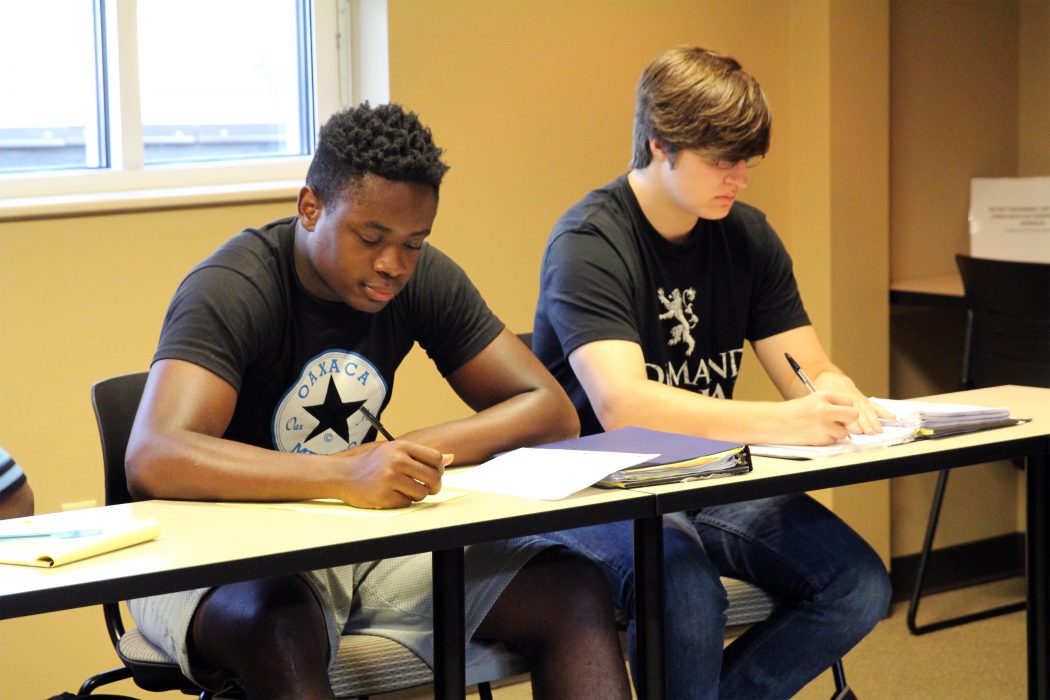 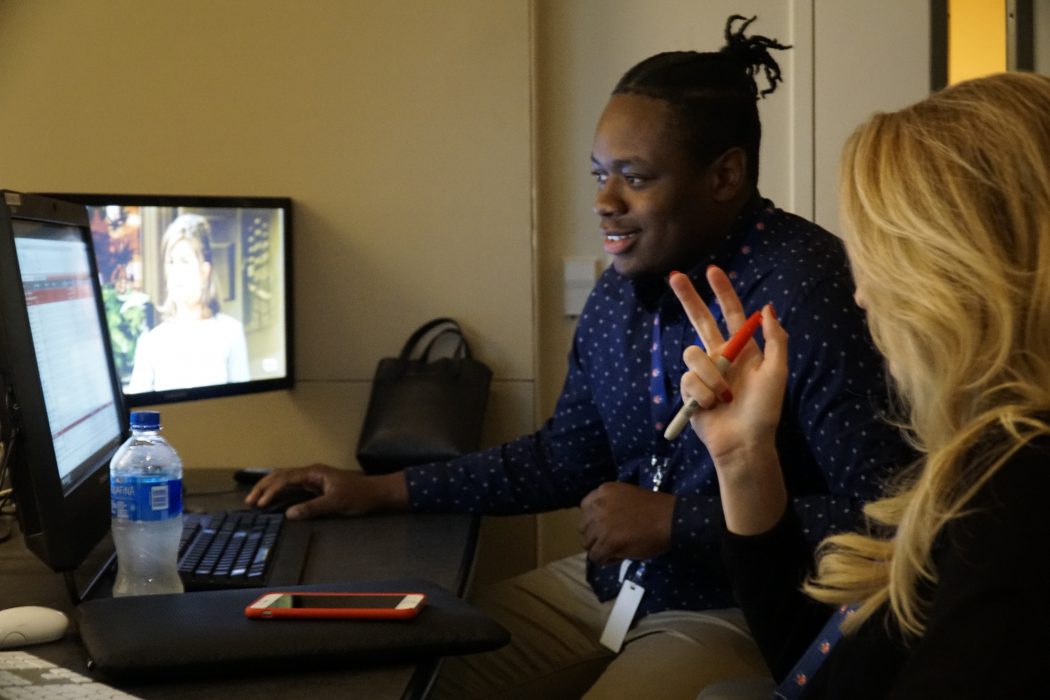 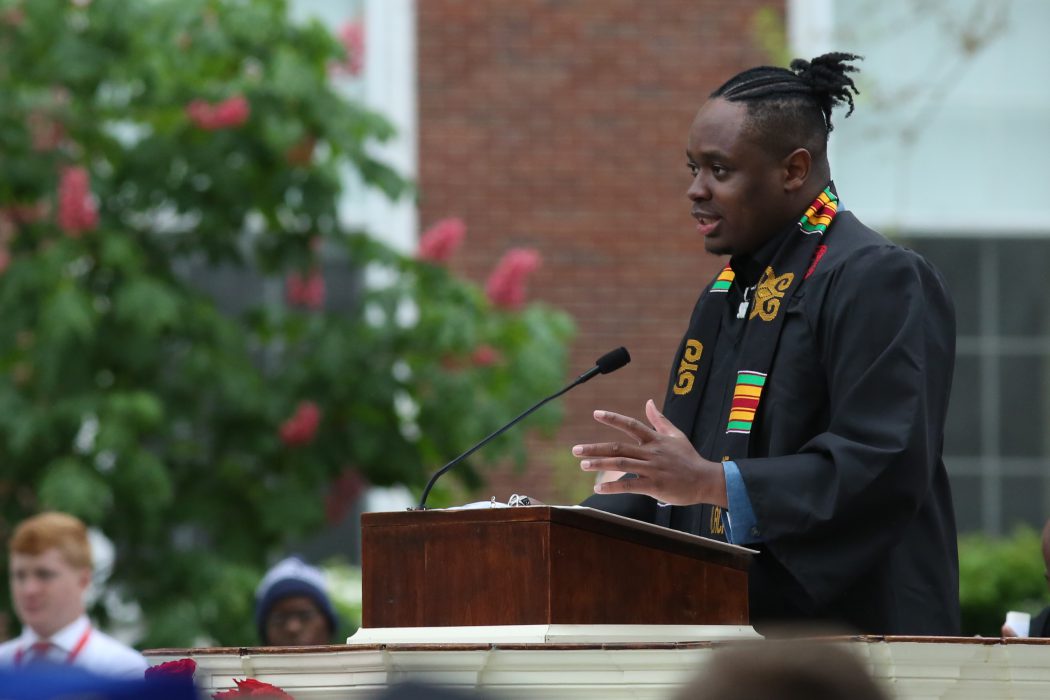 “We Believe In You”

Enrique Vargas ’19 was in the Lilly Library last April celebrating his upcoming graduation from the College with his fellow participants in the first cohort of the Wabash Liberal Arts Immersion Program (WLAIP). He noticed other students in the library were watching.

“There were times when we would have an event on campus, and I would notice there were students who were looking at us thinking, Oh, how do I get into that?” Vargas recalls. “It’s like we’ve had this secret experience. It would make me wonder, How can this be available to everyone else? But at the same time, I’m so happy I’m a part of the WLAIP.”

English Professor Crystal Benedicks, one of Vargas’s instructors and mentors for four years in the WLAIP, is happy to hear that. As one of the designers of WLAIP’s curriculum, she knew the inherent challenges the students and their teachers faced. Any program that carries the goal of supporting at-risk students or providing some sort of leg up may, despite the best intentions, spotlight the perceived deficits of its participants, both for them and in the minds of the student body at large. Yet for Vargas and many of his WLAIP brothers, the program granted privilege. Rather than outsiders, these students moved to the center of campus activity, many of them as leaders, often eliciting the wanting glances of peers.

“We were concerned when they came in that they would feel like they didn’t belong,” says Benedicks. “But by the end of their time at Wabash, they felt like they belonged the most.”

Four years ago, no one really knew what to expect.

In July 2015, the College invited 30 students to take part in the inaugural WLAIP, beginning with a distinctive, four-week, residential foray aimed at improving the retention and graduation rates for students from underrepresented backgrounds—first-generation college students, students of color, and Pell Grant-eligible students. Funded by the Andrew W. Mellon Foundation, the program provided academic support all four years and included an internship the summer between each student’s freshman and sophomore year.

“WLAIP is a program that acknowledges that students come here at different paces with different experiences in navigating the college process,” Psychology Professor and WLAIP Director Bobby Horton said that first year. “We’re trying to meet these students where they are so that we can do our best by them.”

“I was looking at it as an academic summer camp,” Byshup Rhodes ’19 recalls.

This was something more. It was an entry into academia, but also into a circle of support and friendship—a way to plug students into the support network and a bonding experience to tap into one of the College’s fundamental truths—the greatest gift Wabash gives its students is each other.

“I thought I was going to be the only minority in the group,” Chris Diaz ’19 recalls. “I go there and it was almost all minorities. I immediately had a lot of friends. It was easy to get close to the students who were there.”

Proximity led to a discovery: Despite their varied backgrounds, they all seemed to possess a similar mindset.

“That was reassuring,” says Sergio-Steven Cobos ’19. “You had a lot of like-minded people and it was easy to make friends. Whatever fears I had quickly subsided.”

The centerpiece of the curriculum was a for-credit English composition course to introduce students to the academic rigors of college. Putting together the initial syllabus brought about a shift in perspective for English Professors Jill Lamberton and Benedicks.

“We thought about who the students were,” says Lamberton, “Then we said, ‘Who do we know who has written about what it’s like to be them?’”

During their first class meeting, students received a 20-page reading packet that centered on Gerald Graff’s “Hidden Intellectualism,” an essay that explores school smarts vs. street smarts and how the potential of the latter is often overlooked. The instructions were simple: Have it read for tomorrow.

“I saw words I didn’t even know existed.” Jaleel Grandberry ’19 laughs. “This is real. I knew we were in a different ballgame. The professors helped us. The feedback was great. It got us up to speed and got us ready for Wabash, but they definitely hit us hard out of the gate.”

Vargas remembers that class as a breakthrough moment.

“I thought I was a pretty good student and a pretty good writer, but I always had doubts,” he says. “I’d never had a teacher say, ‘You are a good writer, you can do this’ until I got to the WLAIP. They’d say, ‘We believe in you. We think you can become a really good writer.’ It was the first time that I felt like, Here is someone who really does believe in me and wants to see me succeed.”

It was all about students’ experiences. No matter what their preconceptions of college, no matter their academic capital, the WLAIP would be about them.

It may have been the students’ entry into academy, but they weren’t going alone. In addition to the 29 other guys, Benedicks and Lamberton were with them in class for hours every day. They became mentors and remained in their corner for four years.

“They were huge in the development of my confidence and ability,” Rhodes says. “That rapport—you could see their super intellect, but there was a person who would talk to you and be straight up about writing or thinking better. You realized, Wow, I could hold my own with a professor.”

WLAIP became a bonding experience not only for the students, but for peer mentors and the professors as well. Class and writing sessions every day. Readings and constant feedback. An eight-page paper completed in one day. Even vulnerability was tested in class with an audio essay final assignment modeled after the NPR series “This I Believe” that was shared with the entire Wabash community.

“They are all in,” Benedicks says. “There is no sense of, ‘Will they do the work?’ It’s complete engagement. Part of that is because they are new and want to get it right. Another part is everyone around them is also all in and completely engaged. It’s profoundly and unexpectedly intimate.”

“I’m still close to Dr. Lamberton,” Grandberry says. “She inspired things in me. She looked past the papers and really looked at us as individuals, helped us find our passions and find ourselves along the way.”

“I wanted to prove myself, just like everyone else,” says Kyle McAtee ’19. “It was one of the most competitive times I’ve had here academically. Everyone was trying to out-do each other. We got a lot of work, but it really set the table for our first semester of college.”

Many members of that first group claimed not to feel like freshmen when the fall semester rolled around. Cobos already knew where he would study comfortably in the library. When school started and there were more classes, it became simple: just plug and play into his routine.

Grandberry can’t explain the feeling. He felt like he was a step ahead, especially with writing and class discussions. Rhodes says the WLAIP eliminated that deer-in-the-headlights feeling. College is tough, but manageable.

“We were here for a reason,” he says.

Diaz says the program helped him interact with people different from himself.

“It taught me not to be scared,” he says. “That’s how the world is. I’m going to end up in environments that I’m not used to. I got the first taste of that through the WLAIP.”

“They got the confidence to do something really hard,” says Lamberton.

David Segovia ’19 recalls a team-building activity, where the guys had to build a rope web, then figure out a way to get to the other side without touching it. At some point they realized they had to trust each other enough to lift, push, and support each other through.

“That is such a metaphor for what you have to do in your freshman year here, which is to be vulnerable, trusting, and willing to ask for help.”

The WLAIP graduated its first group of students in May. Twenty-four of the 30 original participants crossed the stage to receive their diplomas. Of the first four groups, 86 of 113 students are still on pace to earn Wabash degrees, which is a significantly higher percentage than the graduation rates for the underrepresented student populations that make up the WLAIP.

Perhaps a better measure of success is how these guys have become so essentially ingrained into the Wabash fabric. WLAIP participants earned leadership positions in the Sphinx Club, MXI, ‘shOUT, Wabash theater, and more. Two were football team captains in 2018, while another earned Phi Beta Kappa accolades. Seven were recognized at Awards Chapel.

“I’ve become more outwardly focused—I care a lot more about people than I did four years ago,” says Grandberry, who was one of two Commencement speakers last May. As if taking a cue from his WLAIP mentors, in his speech he urged his classmates to “be yourself, unapologetically.”

The program wanted to put students at the center of the Wabash experience, but WLAIP has had a ripple effect, rewarding the students’ families and the College as well.

“This program is so fun to be a part of, and, in some ways, it is emotionally exhausting,” says Horton. “You’re always thinking, How is this guy doing? What about him? It has helped me become a little more compassionate toward all students.”

“For me the most exciting thing about the program is the way it has provided a test-bed for innovative teaching and mentoring,” says Dean of the College Scott Feller. “The lessons learned from WLAIP can inform all our work as teachers and mentors.”

Looking back on that pre-commencement reception for WLAIP grads in Lilly Library last April, Vargas feels a sense of accomplishment, camaraderie, and something more.

“Being all together in the same room again, we kind of realized that we made it. Four years and here we are. It went by really fast. Whenever I would see these guys, it was like, I’ve got your back. Everything’s going to be alright—we came in together and we’re going to leave together.