He had left his position at Enterprise (the rental-car chain, not the starship) to do some “soul searching.”

“I spent a couple months diving deep into who I was, what I wanted, what I thought I was capable of,” he says. “Whenever I would come up with, Well, maybe I want to do this, then I would do searches on the Internet, go to the library, read some books, feel it out, and talk to people who worked in that field.” 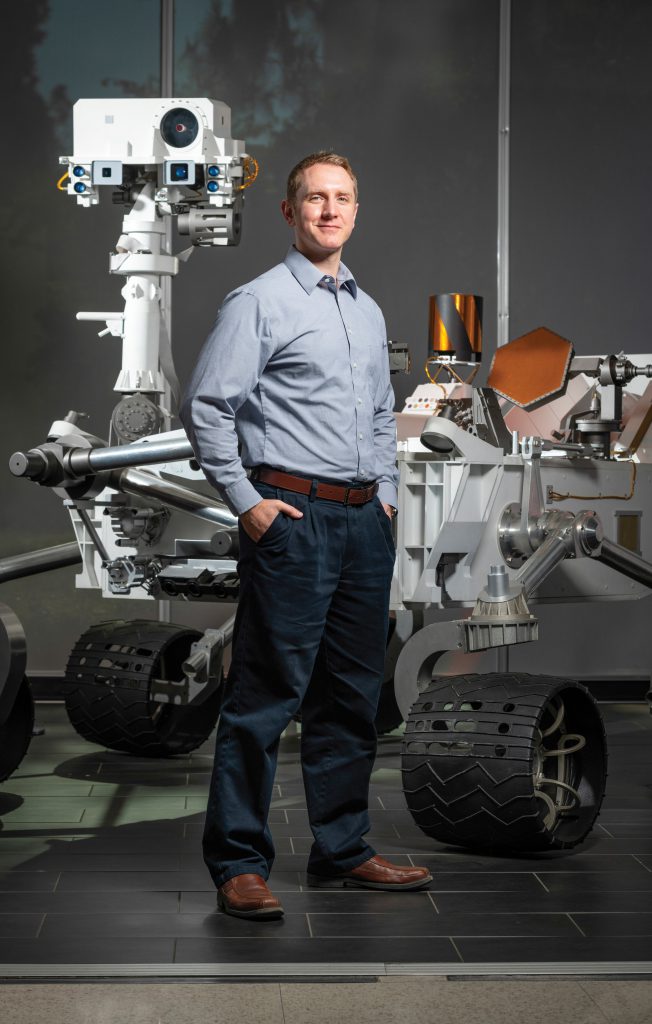 Zusack with a model of the Mars Rover Curiosity near his office at JPL.

He thought back to the years before he was a psychology major and German minor at Wabash, to the eight-year-old boy who spent hours drawing new designs for rocket ships.

“I remember one in particular. I was just smart enough to know that space isn’t completely a vacuum, and that rockets were really expensive, so my eight-year-old brain put two plus two together and said, Okay, you just need a really big jet engine. And this one was really, really big, of course, because it was in space.”

“But I thought about how proud I had been of that, how that had been my favorite thing to do.”

He considered becoming an engineer but didn’t want to get stuck in a cubicle solving problems. He wanted to build spaceships. So Zusack googled “building spacecraft” and “how to become an aerospace engineer” and found a talk on iTunes University by MIT professor and former NASA administrator Dava Newman. She was talking about a new spacesuit she had designed.

“Someone asked her what it was like to be an engineer, and she responded in the most eloquent way. She said engineers are explorers—people who want to push the bounds of what can be done.

“That word—“explorers”—resonated so powerfully with me. I went down to IUPUI the next day and started looking at admissions material.”

He loves it—you can hear that in his voice.

“There was a study when I first started at JPL, and we were looking at Uranus and Neptune. They were trying to figure out how to get inside these frozen-gas giants, because they recently discovered the core is water.

“Engineering is how we do that. We take what can be done and push the bounds of it to help humanity explore the unknown. I get to do that.”

Wabash is fond of saying “majors don’t matter,” and psychology majors find their vocations in many different fields. But Zusack is the department’s first rocket scientist. Were Zusack’s four years at Wabash wasted steps in the wrong direction?

Not at all, he insists.

“In high school and middle school, I excelled at math and science. I got to Wabash and suddenly the doors were wide open. I could do anything I wanted to, so I looked in the opposite direction. I was pushing the bounds of who I was.”

“I guess—but what I’m doing now never even occurred to me then. I could have majored in physics and gone into the 3-2 engineering program. But while I worked hard at Wabash, my engineering degrees took a lot of very specialized discipline— many, many all-night-at-the library-type of study nights. I wasn’t ready to take this path. I wouldn’t have wanted to narrow my focus like that then.”

Zusack spent the next four-and-a-half years after Wabash as a branch manager at Enterprise Rental Car.

“I loved the management aspect of that work—it still serves me. I don’t regret my time there at all—it just wasn’t for me.”

Not everyone thought Zusack’s step from the comfort zone to the outer limits was a good idea.

“I was making pretty good money when I left; then suddenly that income stopped. I was on my own with some savings and this vague idea that I wanted to go back to school, but I didn’t know exactly what I wanted to study.

“My parents have always been supportive of what I do; my friends thought I was crazy.”

He remembers the fear.

“It felt like a free fall. My first impulse after I left Enterprise was to get another job, some profession making decent money. Just put this idea of restarting behind you. I needed a place to land.

“So when I decided I wanted to build spaceships, I didn’t just think about studying engineering but where I would be working, likely at NASA. I wanted to plan a trajectory, even if that trajectory had to change.”

Once he was on the path, things started to click.

“I did surprisingly well, and better than at Wabash. But the stakes were higher this time too. I was on my own, paying for classes, and working part time. When I started doing well, it felt so much more rewarding.”

He was discouraged at times, but being older brought a new perspective.

“There were moments, especially those late nights, when I seriously questioned my ability to do something. There’s always doubt: Did I make a big mistake? Do I need to find a new direction? Then I realized the worst thing that could happen was I could fail a class. This isn’t going to kill me. I can just retake it. I did a whole lot better once I realized that!”

Internships gave him experience and patience.

“I’d be working with people doing exactly the types of things I wanted to do. Anytime I got down, I would remind myself that this was where I was going.”

“He has excelled above all other students in pursuing this independent research work,” said NASA Materials Engineer D. Laurence Thomsen after Zusack was named Intern of the Year by the American Society for Engineering Education in 2015. Thomsen particularly praised Zusack’s technical writing, literature reviews, and innovative problem solving.

He wasn’t building spaceships, but Zusack was designing tests for some of their parts, including a robotic arm for the International Space Station and materials for the planned Orion spacecraft. He explored how to extract water ice from the pole of the moon.

He hadn’t landed the dream job at NASA yet, but he was certainly in orbit.
A constant through all of this was the piano and a love of music he had pursued throughout his time at Wabash as a student of Cheryl Everett.

“He played with great passion and connection to the music,” Everett says of Zusack, who won the College’s Lewis Catuogno Piano Prize in 2005. “I would walk in the building and hear Steve in the practice room playing ‘The Flight of the Bumblebee.’ He had a quality in his playing that brought that piece to life.”

When the renowned Eroica Trio visited campus for the College’s Fine Arts Series, Zusack played the first movement of Beethoven’s “Moonlight Sonata” for pianist Erika Nickrenz. She and Everett talked after the performance.

“We agreed he had a spiritual, celestial quality in his sound and interpretation of the piece. I knew music would be a lasting part of Steve’s life.”

He played the piece again a year after his graduation during an event rededicating the College’s Bosendorfer grand piano; his last performance on a Wabash stage was music evoking moonlight.

Music was there as he contemplated his vocation, after he left Enterprise, during his search, and a respite between classes and work.

“I would play for hours, just for me.”

And just as his German minor helped him nab his internship at the German Aerospace Center, music helped him get through it.

“I herniated a disk in my back when I was there, and I was in immense pain; they actually let me lie on the floor and work upside down on my computer to get my final report written,” he recalls.

“The piano helps me recenter myself.”

Life has come together for Zusack in Pasadena.

He relishes the work. His favorite recent project? A Venus lander.

“The record for any spacecraft living on the surface of Venus is 137 minutes. There’s the sulfuric acid and carbon dioxide atmosphere, and the extreme pressure. It’s like the bottom of the Marianas Trench. We’re working on a mission concept for a lander that would live there for a long time.”

Zusack’s role in the process has a liberal arts ring to it.

“I bring together several different disciplines of engineering. If you want to build a spacecraft, you need a power system, a propulsion system. You need structure, you need communications. You need all these different components, and my job is to make sure they all work together.

“The way I go about this is a little bit different, because most people who come to JPL have a strictly engineering background. I have liberal arts, I have business, I have engineering. I think one of the reasons I got the job was my diverse background.”

He says his training in psychology helps him communicate more effectively with “very passionate and very intelligent people” who tend to be introverts. “I try to feel their perspective, their point of view.

“There’s a clear marriage between all of my previous experience and what I do here.” He laughs. “It’s almost a liberal arts approach to meshing the liberal arts with non-liberal arts.”

Zusack says he realizes the “free fall” he took to get here isn’t for everyone.

“It was a dangerous path—I had to be all in. I risked a lot in order to get here. Though it did work out spectacularly well.”

He loves the weather in Pasadena. He can see the mountains from the house he and his partner are moving into. He’s been checking out the hiking trails, and one last piece of the puzzle is about to fall into place.

“Now that we’ve got space, one of my first purchases will be an electric piano—something with the feel of an acoustic. I’ve been looking—they’re out there.”

Don’t Give Up
WM asked Steve Zusack, “What would you tell those who are still searching for their vocation or work they find more meaningful?”

I hesitate to give advice because most people who are my age—in my late 20s when I started this path— have family or other responsibilities that complicate things more than what I had to deal with.

I’d love to say, “Risk it all, because it’s worth it,” but that choice is not always in the cards.

So my advice would be, Don’t give up. Take the time to get to know yourself; to figure out what you want to do. If you see it, don’t give up trying to get there.

Giving up is comfortable. It’s easy. You can just go with the flow and let your life figure itself out. The terrifying thing is challenging that.