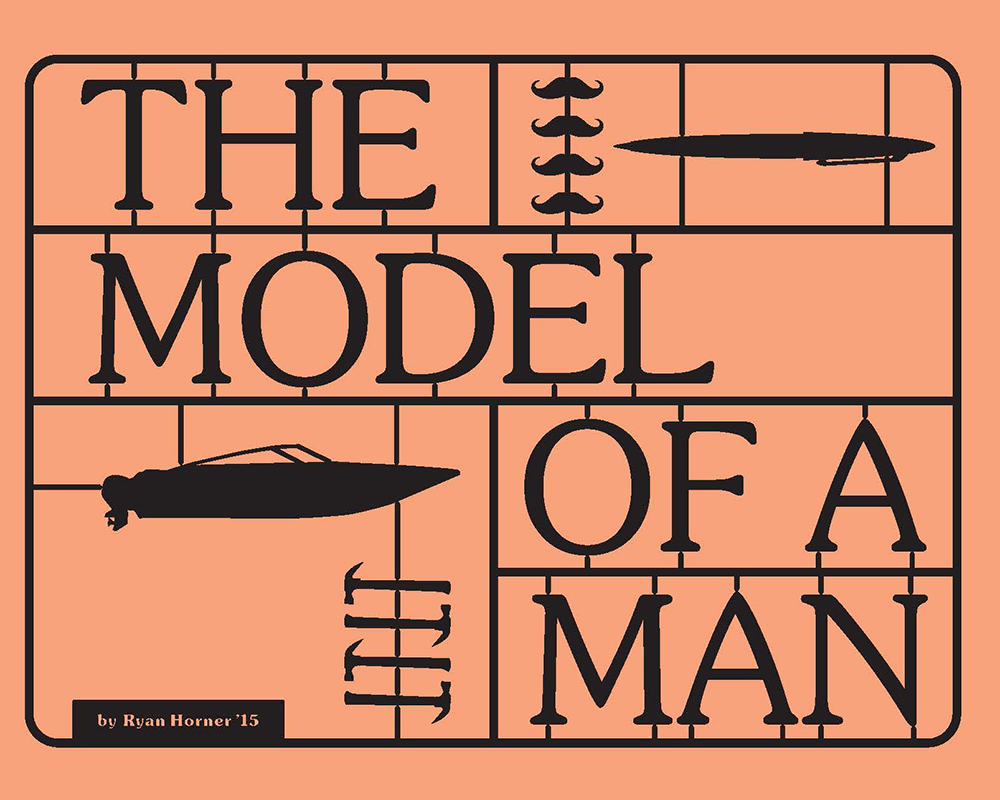 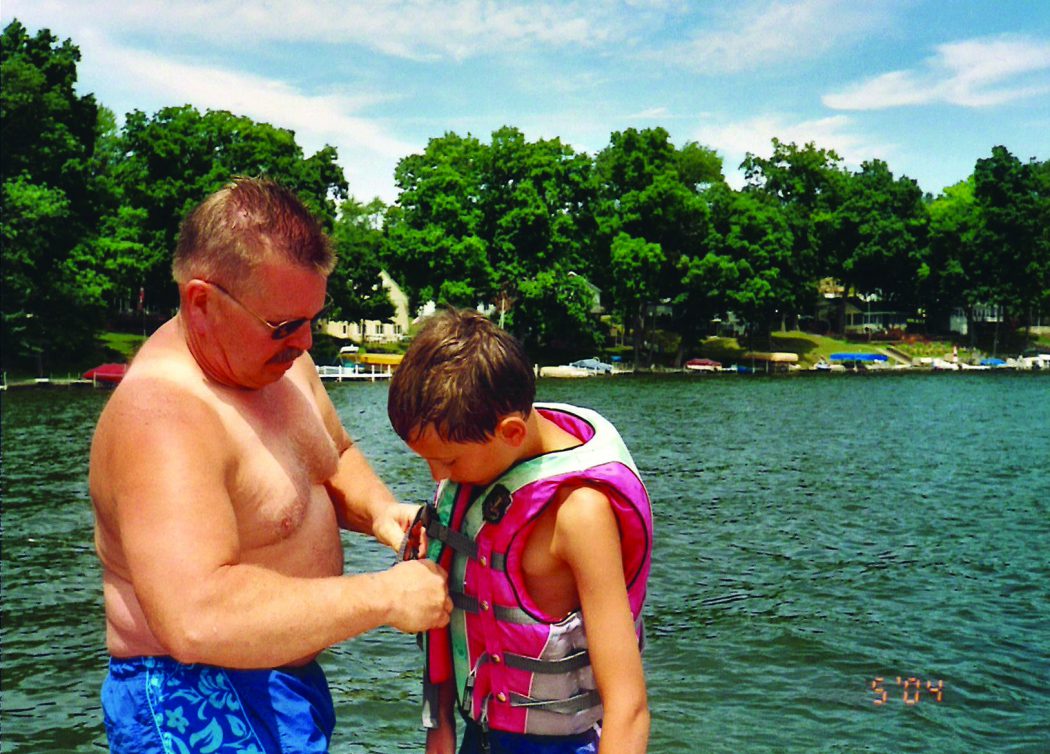 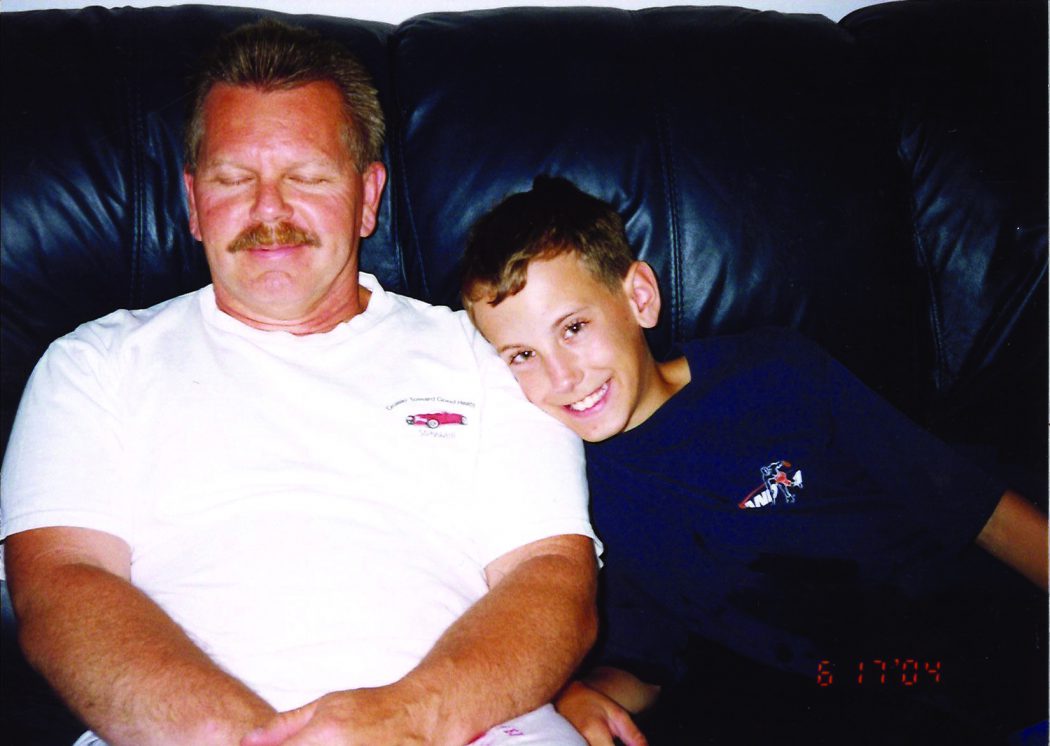 The Model of a Man

My stepfather Dean’s last steps were the hundred feet he walked at my sister’s wedding in March, two months before his death, as he guided her down the aisle.

He had recently been constrained to a wheelchair, his legs too weak to bear weight, but he was determined to walk with her. At the rehearsal we didn’t dare practice the walk out of fear it would drain his limited energy.

On the day of the ceremony, I hovered a few feet behind him, ready to catch him should he fall. As he came down the aisle with my sister, his face alternated between a grimace and a grin with each step of his left leg—the worst of the cancer had taken hold in the bones there—but the two of them finished their walk and we all breathed easier as he sank, for what turned out to be the last time, back into his wheelchair for the rest of the ceremony.

I think he knew those were the last steps he would take—I think it was important to him that the story ended that way.

For 20 years, Dean was the father figure in my life. But it didn’t start that way.

At first he was an intruder in our house, a male presence my six-year-old brain couldn’t reconcile. He wasn’t my father; I didn’t know him, yet I was expected to bend to his will and words. His enormous mustache terrified me, but it was worse for my younger sister. When Dean eventually shaved it when she was six, my sister feared he was a stranger who had come to abduct her.

We tussled for years. At the time I was still attached to my biological father, and to let Dean in would have felt like a betrayal. Every attempt Dean made at fathering me was an affront; I didn’t need another father.

But as my relationship with my birth father fell apart, Dean kept quietly stepping in to fill the void. For years he cut my hair, one careful hand resting on my shoulder or my skull to make certain he didn’t slip. He taught me to ski, to solder, to pray, to practice. When he turned 60 and astonished us all by starting to write poetry, he asked me to read the ones that weren’t love poems to my mother, looking for advice on how to make them better.

When Dean first got sick, I was a high-school senior. Around the time he was going through surgery, then hormones and chemo, I shaved my head for the swimming sectional meet and for a few weeks we were bald together.

By my ringing in at Wabash, he was recovering. It was a high point, but it would prove short-lived; over the next seven years, we rode the cancer roller coaster of recurrence, treatment, treatment failure, clinical trials, and, eventually, pain management.

In the days and weeks after Dean’s death, I was stronger than I thought I could be; at the viewing and funeral, I greeted every person. Hugged my family hard. Stood tall. Since I’d had seven years to practice it, I said what needed to be said in order to help others grieve: he had lived a long and fulfilled life; in the end, he did not suffer; the sheer scale of his absence was a sign of the enormity of his love.

I meant every word.

Lurking behind those words, though, were the other halves of the truth, which I would spend the next year wrestling with. They were harder to swallow: There was more Dean had wanted to do and see and be; before his peaceful passing he had suffered for years; and though we did what we could, in his final months a look of pain rarely left his face.

Finally, there was the new reality we had woken to on the day after the funeral: The chasm Dean had left behind in our lives was so vast it seemed unbridgeable. I wanted desperately to find something, anything left of him.

I found a voicemail from Dean saved on my phone. It’s just a casual Sunday check-in—a minute of Dean telling me about his day, about how my mom will be home soon with dinner, about how he misses me and hopes I’m doing okay. On the days when the void between us feels biggest and he seems most gone, I listen to it.

I didn’t know it at the time, but it would be the single most memorable class period of my time at Wabash. Professor Eric Olofson was talking to those of us in his Psychology of Fatherhood course about a curious thing that happened when researchers asked young men what kind of fathers they wanted to be. The young men fell neatly into two categories: Either their own fathers were great and the young men had decided to imitate them, or their fathers were terrible and the young men were determined to do the opposite. Without realizing why, most would follow one of those two paths.

But I already had two fathers, two models for a man. I’d spent 18 years trying to decide which one was worth imitating and which was not. That day I realized there was another way. I didn’t have to choose one over the other.

The question began tugging at me then and has never stopped: If I paid attention and made nuanced and thoughtful choices, couldn’t I just choose my own way of being a father, being a man?

Late in his life, Dean started to reflect on the mistakes he had made.

His poems turned contemplative. He started giving sermons at churches in the area, talking frankly about his failures as a younger man. The conversations between us turned into explorations of ourselves, with Dean leading the charge—he wanted to know if I was doing right by the people who depended on me; he wanted to know if he had done right by me, and where he hadn’t he wanted to apologize.

It was hard for us to hear these thoughts from him at a time when we were mentally flinching, preparing to grieve him. We wanted to celebrate the good he had done, not dredge up his failures.

We couldn’t understand it then, but this was his way of celebrating. He was reveling in how far he had come—how far we all could come, and how it gave him hope to think that he had been one type of man, then another, then yet another.

At first the funeral director suggested we shorten the hours for the viewing. We doubled down. “You don’t understand,” we said. “You didn’t know him.” In the end, he relented. An hour after the viewing hours had ended, the funeral home door kept opening, letting in the smell of rain. It had been that way since the doors had first been unlocked six hours earlier. People from four communities and six decades of Dean’s life had come to pay their respects; in retrospect, one of the greatest gifts Dean gave us was the turnout at his viewing and the stories those people told.

In the year since his death, I’ve often thought about the new things I learned about Dean in those hours—who else he had taught to ski, who he had helped out of a tough spot, who had relied on his knowledge of engines, carpentry, agriculture. Who he had worked under, alongside, over. Who had loved his poems, stories, sermons.

My stepfather Dean was the kind of person who couldn’t process the events that had happened to him until he could tell you about them. A fishing trip became a fishing-trip story. A day in the fields became a day of field stories, full of plot twists, personalities, and morals. It was like Dean lived his life twice—you could sit in the present moment with him and watch his brain going a million miles a minute trying to figure out how he’d tell you about that moment later.

For the past year I’ve been trying to find what of Dean is left here, is left in me. Dean didn’t give me his chin or his blood type. I don’t have his same mannerisms or his turns of phrase. I didn’t take his last name, and though he spent his whole life working, he never made enough money to leave us with as much as he would have liked.

But in the year I’ve spent wrestling with his death, I’ve learned what he gave me in life: he passed along the instinct for weaving a narrative, that drive to process the world through a beginning, a twist, and an end. Before I ever knew I was learning it, he taught me to take what the world has given me and, like fish or loaves in a miracle, to multiply and magnify it until it moves someone.

After all, I am a storyteller’s son.